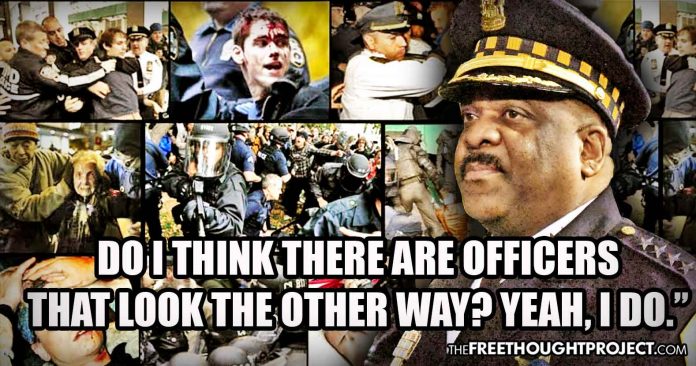 Chicago, IL — Recently, Chicago’s top cop, Police Supt. Eddie Johnson—whose base salary is over a quarter of a million annually—told the Chicago Sun Times in an interview that cops “look the other way” all the time when it comes to witnessing misconduct within their ranks. While readers of the Free Thought Project likely know about this blue code of silence within departments, for the superintendent of one of the nation’s largest police forces to come out and admit this is noteworthy and utterly astonishing.

The system of US law enforcement is set up to protect itself which makes it nearly impossible for an individual whistleblower to prove wrongdoing. In case after case, TFTP reports incidents in which abuse, violence, and even murder has gone on inside police departments, is widely known inside the department, yet no one speaks up. Chicago is one of the worst departments in this regard.

Crossing the blue line often means career suicide and can also be dangerous. Previously, the Free Thought Project reported on the whistleblowers from the Chicago police department whose very lives were threatened for trying to expose the corruption in their department.

As Shannon Spalding, one of the whistleblowers from the CPD points out, this blue code of silence and punishment is already an unfortunate reality for most and the superintendent’s comments back her up.

“It’s no secret that if you go against the code of silence, and you report corruption, it will ruin your career,” Spalding said.

Spalding and her partner Daniel Echeverria uncovered a massive level of corruption in their department, leading to the arrest of other officers. However, being good cops got them threatened with “going home in a casket.”

This cycle of the “blue line” of protection can only persist for so long before there is no one left with enough courage to call out the corruption.

In his interview with the Sun Times, Johnson’s words suggest that this is already happening.

“Do I think there are issues in that regard? Yeah.” said Johnson, stopping short of calling out the systemic problem, adding, “But I’ m not going to indict the entire department for the acts of certain individuals … If I’m made aware of it, I deal with it.”

When the Times rhetorically asked the question of “isn’t that the very definition of ‘code of silence’,” the superintendent noted that there is no definition of it in the dictionary.

“When I look in the dictionary, I don’t see ‘code of silence.’ This is a term and a phrase that people come up with — and that’s fine. It means different things to different people,” he said.

“We can call it that. I’m fine with that. I just told you, if I see those types of things occurring, I will deal with those individuals.”

While it is certainly music to the ears to hear cops, especially the top level cops like Johnson, exposing the misconduct within their own ranks, it’s little more than lip service given Chicago’s rampant problem with corruption.

In one particularly egregious case, a Chicago cop tried to report a fellow cop who shot an innocent unarmed autistic teenager in drive-by shooting fashion, and for this he was retaliated against.

Sgt. Isaac Lambert became the latest victim of his fellow Chicago officers retaliating against him for refusing to cover up the shooting of 18-year-old Ricardo Hayes in 2017.

Lambert filed a whistleblower lawsuit against the city last month because of the way he’s been treated for being honest and courageous.

On Aug. 13, 2017, Hayes was shot by off-duty police Sgt. Khalil Muhammad. In the 911 recording, Muhammad can be heard telling the dispatcher that “the guy pulled, like he was about to pull a gun on me, walked up to the car and I had to shoot.”

But this was a lie. Hayes had no such gun and surveillance footage showed he was running away and Muhammad fired out of his window in a drive-by fashion.

As TFTP reported at the time, Hayes, who has autism, had somehow gotten out of his house that night and was lost. However, because he had the mental capacity of a child, his behavior seemed odd to the untrained officer.

As the video shows, Hayes stops in front of a home and stands there for a minute as
Muhammad approaches him in his unmarked personal vehicle. When Hayes begins to slowly move again, Muhammad opens fire from inside his truck and tries to kill the boy.

In his lawsuit, Lambert claims “the video reveals that the shooting was not justified and that [Hayes] never did anything to threaten Muhammad or give him any reason to shoot.”

Hayes attempted to tell his supervisors that Muhammad was unjustified in the shooting, but they are all corrupt and were hellbent on covering it up.

According to his lawsuit, “efforts were made by high-ranking officials in the Chicago Police Department to mischaracterize the findings of the investigation and change some of the conclusions.”

“The effort was made to make the shooting of Ricardo Hayes by Khalil Muhammad appear to be justified, when in fact it was not,” the lawsuit reads.

These “high-ranking officials,” could have included superintendent Eddie Johnson.

Even civilian oversight boards aren’t safe from police retaliation for exposing misconduct. Lorenzo Davis was retaliated against for simply doing his job of looking for bad cops while working at the Independent Police Review Authority (IPRA).

“They have shot people dead when they did not have to shoot,” Davis said about those officers. “They were not in reasonable fear for their lives. The evidence shows that the officer knew, or should have known, that the person who they shot was not armed or did not pose a threat to them or could have been apprehended by means short of deadly force.”

For exposing just six killer cops, Davis was told to change his findings or lose his job. He lost his job.

Unfortunately, this type of response to good cops and civilians, who try to call out corruption is the rule, not the exception. And it is certainly not limited to Chicago.

Previously, the Free Thought Project brought you the story of Laura Schook, who tried to call out corruption in her department. Naturally they tried to run her through the mud and fire her.

Also, we broke the story of a cop in Buffalo, NY who was beaten and fired after she stopped a fellow cop from nearly killing a handcuffed man.

In Kentucky, a sheriff’s deputy was fired for “insubordination” after pointing out that the sheriff had planted drugs in another deputy’s car. Even though the sheriff was indicted, the deputy was still fired.

In September 2015, we exposed the Baltimore police department’s attempt to intimidate a whistleblower officer. Detective Joe Crystal became a target of intimidation for his entire department after testifying against other officers in a misconduct case.  Following his testimony, he received threats from other officers, and even found dead rats on his and his wife’s cars. Since that case, more than a dozen Baltimore cops have been indicted for corruption.

The thin blue line, it seems, is akin to the mafia; cross it and you will be snubbed out by the rest of the gang. It’s nice, however, to finally see they have no problem admitting it.