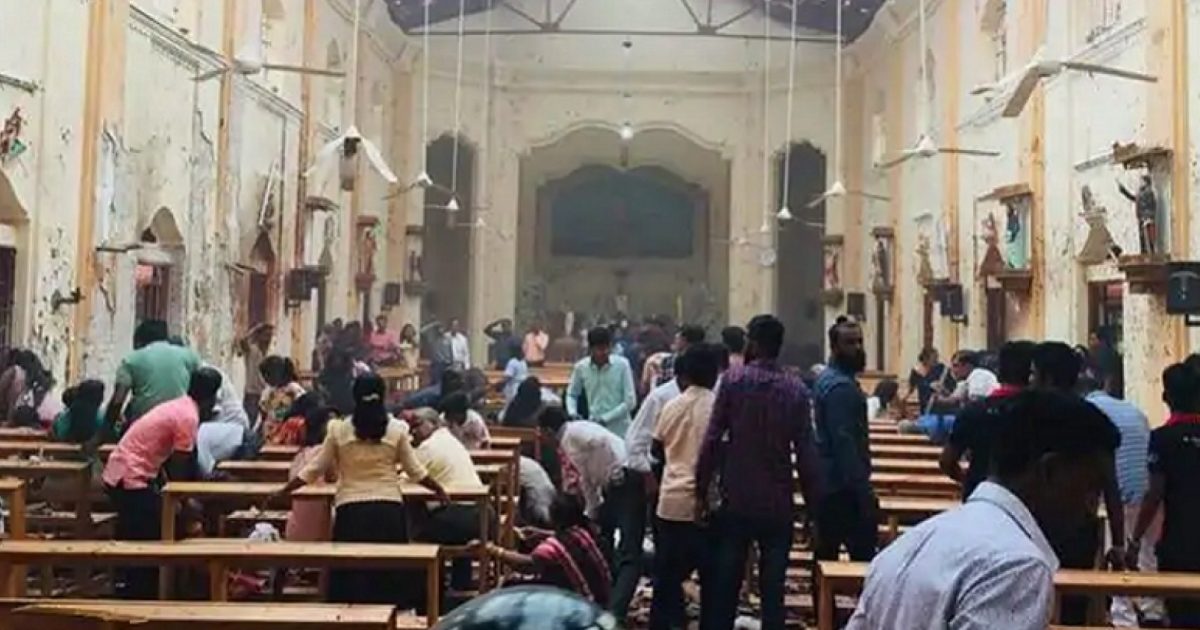 Well over two hundred people are dead, and hundreds more injured, in jihad massacres in churches and hotels in Sri Lanka on Easter Sunday morning, and now the usual denial and obfuscation are in full swing. I’m often asked, when I speak around the country, what it will take to wake people up to the nature and gravity of the jihad threat. For all too many people, the answer, as the Sri Lanka attacks abundantly show, is nothing.

The facts were clear enough, at least if one checked the Indian media. India’s News18.com reported that “two of the six attacks that rocked Sri Lanka this morning are reportedly to be have been carried out by suicide bombers,” that telltale sign that this was a jihad attack, with the bombers hoping to claim the Qur’an’s promise of Paradise for those who “kill and are killed” for Allah (9:111). “The attack at Shangri La hotel,” News18 continued, “was carried out by suicide bomber Zahran Hashim, while Abu Mohammad has been identified as the attacker at the Batticalao church.”

The Hindu, meanwhile, reported on another jihad suicide bomber, Mohamed Azzam Mohamed, who “waited patiently in a queue for the Easter Sunday breakfast buffet at Sri Lanka’s Cinnamon Grand hotel before setting off explosives strapped to his back.” Mohamed was “just about to be served when he set off his devastating strike in the packed restaurant, a manager at the Sri Lankan hotel said.”

What’s more, there was advance warning: AFP reported that “Sri Lanka’s police chief Pujuth Jayasundara issued an intelligence alert to top officers 10 days ago, warning that suicide bombers planned to hit ‘prominent churches’. ‘A foreign intelligence agency has reported that the NTJ (National Thowheeth Jama’ath) is planning to carry out suicide attacks targeting prominent churches as well as the Indian high commission in Colombo,’ the alert said. The NTJ is a radical Muslim group in Sri Lanka that was linked last year to the vandalisation of Buddhist statues.”

Nevertheless, the Roman Catholic Cardinal Archbishop of Colombo, Malcolm Ranjith, said: “It’s a very difficult and a very sad situation for all of us because we never expected such a thing to happen and especially on Easter Sunday.”

Did Jayasundara alert the “prominent churches,” or just the intelligence officers? If he did alert the churches, did Ranjith disregard the warning? We may never know the answers to those questions, but in a larger sense it is easy to see, despite escalating Muslim persecution of Christians worldwide, why Ranjith “never expected such a thing to happen,” and so had no guards at the churches for Easter Sunday: all those who have been for years calling attention to this threat have been branded as “racist,” “bigoted” and “Islamophobic,” and dismissed as “fearmongering.” Everyone in the Catholic Church knows that Islam is a religion of peace; dissenters are shunned and ostracized. Would it have been “Islamophobic” to have Sri Lankan churches guarded for Easter?

The establishment media in the West seemed determined to keep people as much in the dark as Ranjith was. The New York Times mentioned the jihad group that Jayasundara had warned about, but didn’t mention any of the names of the jihadis who had been identified in the Indian media. CNN didn’t mention either, and even claimed that “it’s not clear who’s behind the eight explosions that forced the country of 21 million people to go on lockdown.” Buzzfeed was completely mum about who might be behind the attacks. CBS noted a Sri Lankan official’s acknowledgment that “religious extremists,” of unidentified affiliation, were responsible. The BBC insisted that “it remains unclear who carried out the attacks.”

That coverage was representative of how the attacks were reported all over the West, and indicative of how all jihad attacks are covered. The identity and motive of the perpetrator are glossed over, downplayed, or ignored altogether. If that cannot be done, then the focus shifts to Muslims as victims, bracing for an “Islamophobic backlash” that seldom, actually materializes. In this case, the worst take came from Britain’s egregious Prime Minister Theresa May, whose initial response to the massacre was to tweet: “The acts of violence against churches and hotels in Sri Lanka are truly appalling.”

Yes, Ms. May, this was the work of anti-hotel and anti-church building zealots.

Britain’s Prime Minister can’t name the victims — Christians — for fear of offending the Muslim communities in the UK whose votes she desperately needs. For the same reason, she most certainly cannot mention the fact that many of the victims were celebrating Easter, or name the attackers, or explain the basis upon which they chose their targets.

Theresa May epitomizes the cowardice and pusillanimity of modern Western leaders. And that is why her country, and other nations of the West, are in such a precarious state. But it isn’t her fault. The overall response to the Sri Lanka jihad massacre shows why the West’s response to the global jihad is so wholly and comprehensively inadequate.