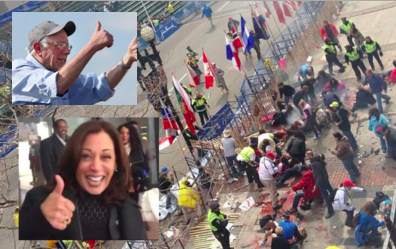 Rapists, bombers, murderers – these are their constituents. It’s war, America.

Bernie Sanders: Even ‘terrible people’ (Boston marathon bomber) have the right to vote
Actually, they don’t.

Harris suggested a “conversation” was in order about the possibility.

DON LEMON, CNN HOST: Another issue that I want to talk to you about — this is really important — I’m not sure if you were watching earlier, but Senator Bernie Sanders said that he is in favor of felons being able to vote while serving in prison. He was asked specifically about people like the Boston Marathon bomber, also people who are convicted of sexual assault. And he said, this is a quote, “The right to vote is inherent to our democracy, yes, even for terrible people.” Do you agree with that, Senator?

SEN. KAMALA HARRIS (D-CA), DEMOCRATIC PRESIDENTIAL CANDIDATE: I agree that the right to vote is one of the very important components of citizenship and it is something that people should not be stripped of needlessly, which is why I have been long an advocate of making sure that the formally incarcerated are not denied a right to vote, which is the case in so many states in our country, in some states permanently deprived of the right to vote.

LEMON: But people who are in — convicted, in prison, like the Boston Marathon bomber, on death row, people who are convicted of sexual assault, they should be able to vote?

HARRIS: I think we should have that conversation.