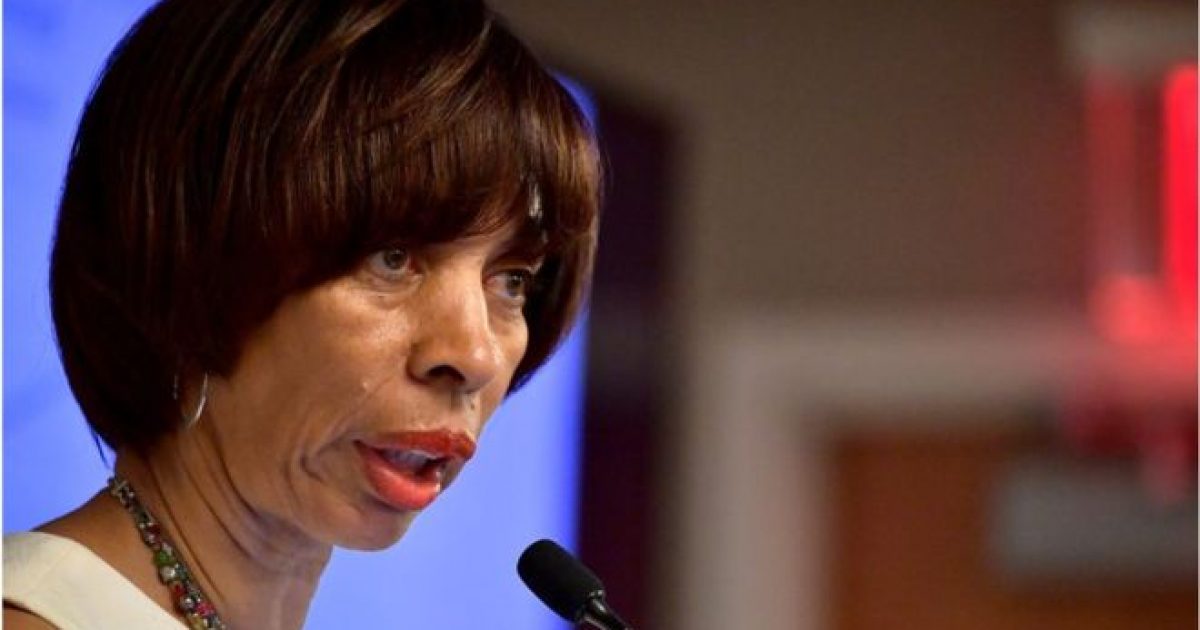 Editor’s Note: I have to wonder what in the hell happens when they catch her. There are two legal systems in this country. One is for people like you and I. The other is for those with connections like Jeffrey Epstein, Hillary Clinton and all the other wealthy and powerful people who continue to break the law without any significant repercussions.

Democrat Mayor of Baltimore Catherine Pugh has reportedly fled the state of Maryland in the midst of FBI and IRS raids on her home and office at City Hall.  That’s not all, she and five of her staffers are on paid leave amid a scandal over sales of her children’s book “Healthy Holly,” even as Governor Larry Hogan has called on her to resign.

“This is too much for our city,” Democratic City Councilman Zeke Cohen said. “It puts all of us under a tremendous strain, and again it is not fair either to the people that live here, or the people that work here.”

Dave Fitz, an FBI spokesman, confirmed agents from the Baltimore FBI office and the Washington IRS office searched at least six addresses. The U.S. attorney’s office confirmed the location of a seventh search. The actions were the first confirmation that federal authorities, as well as state officials, were investigating the mayor’s activities.

Pugh remained inside her Ashburton home during the raids, a police source confirmed. Pugh, 69, did not respond to messages seeking comment.

Shortly after the raids began, Maryland Gov. Larry Hogan called on Pugh, who has taken a paid leave of absence as mayor, to resign. The Republican governor had asked the Maryland Office of the State Prosecutor on April 1 to investigate Pugh’s sales of her self-published “Healthy Holly” children’s book series to the University of Maryland Medical System while she was on its unpaid board of directors.

“Today, agents for the FBI and the IRS executed search warrants at the mayor’s homes and offices,” Hogan said. “Now, more than ever, Baltimore city needs strong and responsible leadership. Mayor Pugh has lost the public trust. She is clearly not fit to lead. For the good of the city, Mayor Pugh must resign.”

The mayor’s attorney, Steve Silverman, said federal agents came to his city law firm Thursday morning to serve a subpoena for her original financial records. They were directed to a sequestered area where Pugh’s documents were kept, he said, and they did not seek any attorney-client privileged communications.

For years, Pugh had somehow negotiated lucrative deals to sell her “Healthy Holly” books to customers that included the hospital network she once helped oversee and a major health plan that does business with the city. She sold $500,000 worth of the illustrated paperbacks to the University of Maryland Medical System, on whose board she sat for nearly 20 years. She also made $300,000 in bulk sales to other customers including two major health carriers that did business with the city.

The revelation of a major federal investigation comes amid a criminal investigation by the state prosecutor’s office, which probes public corruption in Maryland. Other probes include a review by the city ethics board and the Maryland Insurance Administration.

However, it appears that Mayor Pugh has “left the building.”

“[N]o one has seen the mayor and her own spokesperson doesn’t know where she is even though she’s supposed to be recovering from pneumonia,” according to WJZ13. “However, a source tells WJZ however Pugh was at her home when the raid began, but has since left the state.”

Pugh is currently being investigated by the Maryland State Prosecutor’s Office in connection to sales of her “Healthy Holly” children’s books. On April 1, she announced that she would be taking a leave of absence for “health reasons” as the scandal grew.

“The Baltimore Sun reported last month that Pugh was paid $500,000 by the University of Maryland Medical System for 100,000 of the books to distribute to schoolchildren,” according to Thursday’s Baltimore Sun report. “The no-bid arrangement was made while she was on the hospital network’s unpaid board. Health provider Kaiser Permanente later acknowledged that it paid Pugh more than $100,000 to buy about 20,000 copies of her books during a period when the company was seeking a lucrative contract to provide health insurance to city employees.”

Honestly, Pugh appears as if she is on some form of medication.  I wonder if that will prove to be fatal in this situation.