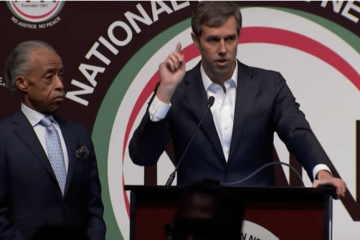 Never mind that the united States debt is now over $22 trillion dollars.  Forget that the united States has $100 trillion dollars in unfunded liabilities.  Don’t worry about House Democrats increasing welfare and warfare spending or Republicans adding $300 million dollars to federal spending.  And, please don’t be concerned the government understates the effect of inflation by pretending it doesn’t cause the citizens negative effects.  Don’t blame government for companies shrinking product size while charging the same price or more because of government manipulation of the chained Consumer Price Index (CPI).  Charlatan politicians are not going to slow down spending American citizens into the ground.

In fact, charlatan politicians like Beto O’Rourke support forming a reparations commission to study the possibility of issuing a national apology and monetary compensation for descendants of slaves here in the united States.

Former Rep. Beto O’Rourke (D-Texas), a 2020 presidential candidate, said that a “conversation” about reparations for the descendants of slaves should take place in “every community” and he committed to signing a bill to study the issue if Congress passed the legislation.

O’Rourke was asked if he would support compensation for the descendants of slaves. In his answer, O’Rourke explained that he discussed the reparations issue with Bryan Stevenson, a civil rights lawyer and political activist. O’Rourke said Stevenson explained that he might not be able to have a “Truth in Conciliation Commission like you had in South Africa” and “may not be able to force the coming together” that’s starting to take place in Rwanda.

“You may not have, as they did in Germany, forcing every single citizen or almost every citizen to go to those places that they would otherwise deny to address their complicity in the problem that they created in the deaths of millions. We need something like that here, but I’ll just be honest with you, given the composition of this country and the fact that we are still a white majority and that far too many people who look like me aren’t going to voluntarily take that action, Bryan Stevenson says this has to happen at a community by community level,” O’Rourke said during a recent campaign rally in Old Town, Alexandria.

The proposal of government reparations for descendants of slaves is unconstitutional, illegal, theft.  O’Rourke shows his ignorance when it comes to slavery.  So, the question becomes, “how is the government going to determine who should be paid and who should be robbed?”  And, “what about black owners of slaves?”  Are they going to be exempt from paying “reparations” or are they going to receive this stolen money based on race alone?  Moreover, it doesn’t matter who this charlatan politician consulted about this issue.

This is theft because no one is going to volunteer to pay;  therefore, payment has to be extracted by means of force.

To compare US citizens who never owned slaves or participated in the slave trade to citizens of Germany during Hitler’s reign who ignored the mass slaughter/murder of 6 million Jews is absolutely grasping at straws.

What happened in Germany and South Africa or what is happening in Rwanda has no bearing on the issue here in the united States.

It’s time politicians and citizens of the united States stopped trying to look at other countries around the world and what those countries are doing domestically.

Our founding as a republic is very different from the founding of those countries.

Our Constitution protects our God-given individual unalienable right to due process whereby no one’s property can be taken without going through due process.

Moreover, God commands that the sins of the father are not visited upon the son – each are responsible for their own actions.

“Now I’m all for Sheila Jackson Lee’s bill that would set up a reparations commission. I would sign that into law in a heartbeat but I want to make sure that in every community at every level, here in the Commonwealth of Virginia, perhaps especially, that we are ready to have that conversation person to person, eyeball to eyeball, just like we’re doing in this room right now. I’m convinced that if we do that, we will form the consciousness and the political will to take the action necessary to repair the damage done, repair the root of the word reparation and to stop visiting that injustice on future generations,” he added.

When it comes to “reparations” or any other issue where one “converses” with extreme anti-constitutionalist ideologues, there is never any conversation – only demands.  And, the demand is “white Americans should pay blacks compensation for slavery because white America enslaved blacks.”

The reason whitey has to pay is because of “white guilt”.

Whites should feel guilty about the history of slavery here in America and be willing to “pay” for the crimes of their ancestors, other nations, and past politicians.

Never mind that no one alive today ever was a slave, ever owned a slave, or participated in the slave trade.

Forget it was Great Britain that imported slaves into the American colonies before the colonies gained independence.

Don’t worry that the Spanish engaged heavily in the slave trade and held territory in the Americas.

Don’t be concerned that the united States consisted of only 34 States in 1861 at the beginning of the War to Enslave the States.

None of that matters;  whitey has to pay.

O’Rourke was referring to H.R. 40, the Commission to Study and Develop Reparation Proposals for African-Americans Act, which would “establish a commission to study and consider a national apology and proposal for reparations for the institution of slavery, its subsequent de jure and de facto racial and economic discrimination against African-Americans, and the impact of these forces on living African-Americans, to make recommendations to the Congress on appropriate remedies, and for other purposes.”

When it comes to these statements by O’Rourke, he should point the finger at his own party – The Democrats.  The Democratic Party has been the biggest detriment to blacks in America through discrimination.  After all, it is the party of the KKK.   President Lyndon B. Johnson’s “Great Society” decimated the black family and implemented the welfare state.

The continual marginalization of whites goes along the lines of dehumanization.  If one is not human, one can be treated any way possible.

Whether these politicians realize it or not, citizens have a breaking point;  and, we are fast approaching it.  Citizens are tired of the hypocrisy and false attributes placed upon them by politicians.

One can be sure that Beto O’Rourke won’t pay one dime in “reparations” should these hacks get their legislation passed, and neither will any of the political or wealthy elite.

The sentiment here boils down to “you first” and then it might be considered somewhat semi-seriously.

Actually, if politicians are so concerned about rectifying a wrong with money that was rectified in blood, those politicians should “voluntarily” pay reparations to ease their conscience.

Being that a good many citizens do not have a guilty conscience because they did not participate in any way in slavery, this theft legislation probably won’t get far.

This is pure rhetoric to gain votes.

If either chamber of Congress had been serious about “reparations”, the perfect time to pass such legislation would have been under #44 when Democrats held the majority in both chambers of Congress.

No one did or even brought it up.

It’s an issue used to foment further division, discord, animosity, and violence between citizens of different races, garner votes to win an election, and use against the other party as a club to beat them over the head.