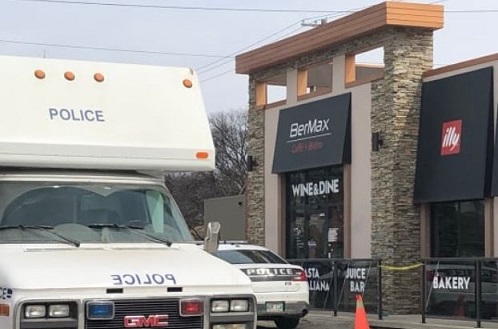 On April 18, 2019, the BerMax Caffé on Corydon Avenue in Winnipeg, Canada, was robbed, a woman assaulted, and the restaurant’s interior trashed and the walls spray-painted with anti-Semitic graffiti.

At the time, Winnipeg police Constable Rob Carver told media the attack was one of the “worst” hate crimes he had seen as a police officer.

According to a CBC News report, at around 10:45 p.m. on April 18, Winnipeg police were called to BerMax Caffé and Bistro, where they found the restaurant “severly vandalized” and spray-painted with anti-Semitic graffiti. The place was almost entirely destroyed, with plates and glasses smashed to pieces, tables and chairs flipped over and other items scattered across the floor. A woman had been assaulted and was taken to hospital in stable condition, treated and released. A robbery might also have taken place.

Const. Carver told reporters at a news conference the next day that the same restaurant has been targeted with similar crimes four times in the past five months. A GoFundMe page was set up by Robbie Kfir Mulder-Kiesman to support the café after a previous incident last month.

Elaine Goldstine, chief executive officer of the Jewish Federation of Winnipeg, said previous incidents were limited to anti-Semitic graffiti, but this violent attack “has taken things to the next level. I just can’t fathom how or why people would want to do such a terrible act. We are horrified and saddended.” Goldstine noted that the attack on BerMax took place the evening before Passover, a major Jewish holiday.

Adam Levy, communications director of the Jewish Federation of Winnipeg, said: “We’re absolutely in awe to be honest, we’re in shock about this senseless act of hatred which has taken place in our own community, in our own backyard. It’s the most brazen act of anti-Semitism that we’ve seen in our community, and perhaps ever. We hope this is not a sign of things to come.”

But according to a new CBC News report on April 24, 2019, Winnipeg police now say the hate-crime had been staged by the Jewish owners of BerMax themselves.

All three members of the family that owns BerMax Caffé and Bistro — Alexander Berent, 56, Oxana Berent, 48, and Maxim Berent, 29 — were arrested and charged with public mischief. They were released and are slated to appear in court in May.

Winnipeg police Chief Danny Smyth said the investigation has been a significant waste of police resources: “Over 25 officers have invested nearly 1,000 hours through a busy holiday weekend trying to bring this investigation to a close. The anti-Semitic graffiti and vandalism were also falsely reported as being done by outside suspects. In the end, we found evidence of a crime. It just wasn’t a hate crime.”

Winnipeg Mayor Brian Bowman called the alleged fabrication disgusting and said if the mischief charges are proven in court, the actions of the accused would represent a “breach of trust” in the community.