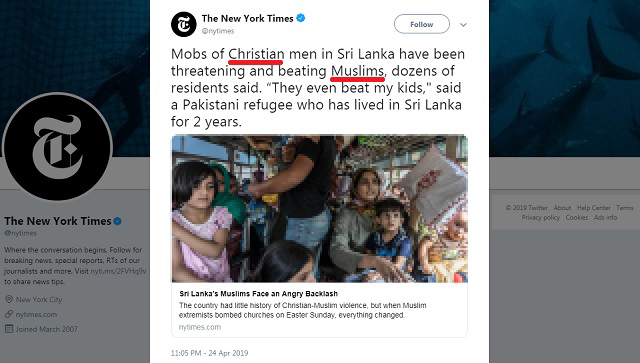 The New York Times decided not to use any euphemisms on Wednesday when they reported that “mobs of Christian men in Sri Lanka” have allegedly been “threatening and beating Muslims.”

Mobs of Christian men in Sri Lanka have been threatening and beating Muslims, dozens of residents said. “They even beat my kids," said a Pakistani refugee who has lived in Sri Lanka for 2 years. https://t.co/AO5sNCgvs5

Note, they specifically identified “Christians” as the attackers and “Muslims” as the victims.

Contrast that with their front page in the aftermath of the Sri Lanka terrorist suicide bombing attacks where no mention was made of Muslims being the attackers nor Christians being the victims. We saw just the same with the Democrats. "Mobs of Easter Worshippers in Sri Lanka have been…" There – corrected it for you NYT. Welcome!

You cannot come and tell us that Easter Worshippers were killed but Christians are beating people in retaliation.
Where is the correlation?

Jokes apart,liberal media is wicked.
Will not brand the victims when they die but will brand them villains s.
I see an agenda

You can say Christian now then

The #nytimes is shameless. Period. Publishing this piece of unsupported, unsubstantiated rubbish in the wake of the heinous Sri Lankan attacks is carelessly irresponsible. They wouldn't have, & didn't, "insinuate" the same after the Christchurch attack.

Even though this was the deadliest Muslim terrorist attack since 9/11, the suffering of those killed and their families takes a backseat in the media to the fear of a “backlash” among Muslims.