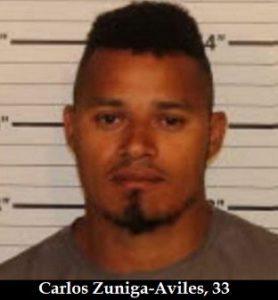 But Demonrats continue to defy and violate federal immigration laws, as well as shield and protect  illegal aliens with “sanctuary” cities and states.

On April 12, 2019, Memphis police responded to a report of an unresponsive infant. 4-month-old Alexander Lizondro-Chacon was taken to a hospital and later pronounced dead from blunt force trauma to the head.

Memphis police charged the baby’s father, Jose Avila-Agurcia (an alias), 33, with first-degree murder, along with other charges, after the child’s mother, Mercy Lizondro-Chacon, told investigators that Avila-Agurcia had struck the baby multiple times in anger after learning he wasn’t the father.

U.S. Immigration and Customs Enforcement (ICE) spokesman Bryan D. Cox said Avila-Agurcia is an alias for Carlos Zuniga-Aviles, an “unlawfully present Honduran national” who has been deported from the U.S. five times— in Feb. 2010, Jan. 2011, March 2012, Nov. 2015, and Dec. 2016. The deportations took place in Texas, Louisiana, and Utah. He illegally re-entered the U.S. after being deported in 2016, which is a felony.

Zuniga-Aviles had also been arrested in 2016 for possession of heroin and cocaine. Federal documents reveal he has used at least four different aliases since 2010.

According to a police report, Zuniga-Aviles confessed that he punched the child in the head multiple times when he learned the child was not his. He is being held at a county jail.