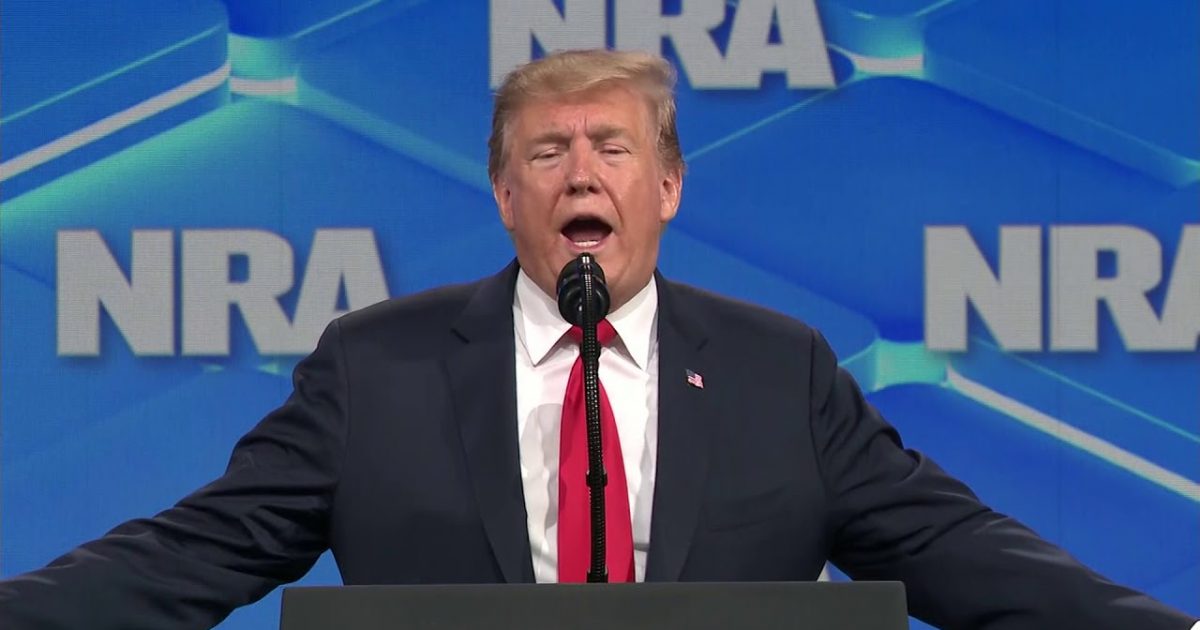 President Donald Trump announced his withdrawal and reversal of plans the Obama administration put into effect with regards to the UN Small Arms Treaty.  The president made the announcement on Friday before the National Rifle Association’s annual meeting in Indianapolis.

The treaty, which was never ratified by the US Senate and, therefore, not valid (even if it had been ratified, it would be unconstitutional to implement), called for a national gun registry despite the claims of John Kerry and others in the Obama administration.

Referring to the treaty as a “badly misguided” treaty, Trump said, “We will never allow foreign bureaucrats to trample on your Second Amendment freedoms.  We will never ratify the U.N. Arms Trade Treaty. I hope you’re happy.”

Right, because after all, why do we need foreign bureaucrats doing what domestic bureaucrats in the Trump administration and Congress are doing?

Of course, the crowd at the NRA stood and applauded the efforts, which I also applaud, but what is utterly amazing is that people don’t believe that this administration has attacked their rights regarding arms.

“It’s under assault,” Trump said regarding the Second Amendment. “But not while we’re here,” he claimed.

Um, is this not you, Mr. President?

WATCH: President Trump: "I like taking the guns early … Take the guns first, go through due process second." pic.twitter.com/aydEZdAGq0

Yep, that’s him attacking not only your Second Amendment rights, but also your Fourth and Fifth Amendment rights while Senator Dianne Feinstein ghoulishly rubs her hands together salivating over the opportunity to use the “other team’s” mantra of unconstitutional behavior.

Then back in December, the Trump administration banned bump stocks, even though you can bump fire without a bump stock!

But it’s not just bump stocks and due process that Trump wants. Last year, the Post went deeper, alluding to the fact that Trump will likely go further than bump stocks.

“In private, he has indicated that he might do more, telling advisers and friends in recent days that he is determined to push for some sort of gun-control legislation, according to people familiar with the conversations,” the Post reported.

Knowing that Jeff Bezos’ Washington Post would love to see all guns pulled from the hands of law-abiding citizens, we can assume that their “source” is accurate.

Trump, himself, even tweeted out that he wants Republicans and Democrats to come together for gun control, just last year.

Whether we are Republican or Democrat, we must now focus on strengthening Background Checks!

Agorist then made a point that I have often made in commenting and that is the political theater that continues to advance the infringement on your rights is drummed up in order to get people out to give more power to politicians and bureaucrats who will continue to infringe on your rights only to ask for your vote again in a couple of years.

Indeed, we can see that toward the end of his speech, we hear what Trump’s rhetoric was really about — getting people out to vote for Republicans — using fear.

“You better get out there and vote,” the gun grabber in chief said of the 2020 election, “It seems like it’s a long ways away. It’s not.”

Just as Trump fear mongered about the left “taking our guns” in his speech, Americans don’t even realize that this is actually what’s happening on the right. In just the first six months after the shooting in Parkland and the president’s statement of “take the guns first,” the Giffords Law Center to Prevent Gun Violence recorded a whopping 55 new bipartisan gun control measures in 26 states. That number is now far greater as states pass “red flag” gun laws to literally do what Trump advocated for in Feb. 2018. They are taking the guns first and seeking due process second.

Clearly, there are people on the other side of the political spectrum who act angry about this, but in the end, we know they are getting even more than they are telling us in the criminal “red flag laws” that President Trump and the states have been lawlessly implementing and promoting.

“It is a treaty supported by our allies, but in opposing it, the president instead chose to stand with countries such as North Korea and Syria,” Kris Brown, president of the Brady Campaign to Prevent Gun Violence, said in a statement.

“President Trump finds it more important to feed his right-wing base than to exercise U.S. leadership on the world stage,” said Rep. Eliot Engel, D-N.Y., chairman of the House Foreign Affairs Committee.

For Engel’s part, he claims the committee will hold a hearing to review the matter.

What’s to review?  It was never ratified by the Senate in the first place!  There is nothing to review.  And as I said earlier, even if it was, the treaty is null and void as it would infringe upon the God-given rights of the American people, which Mr. Engel swore an oath to protect.