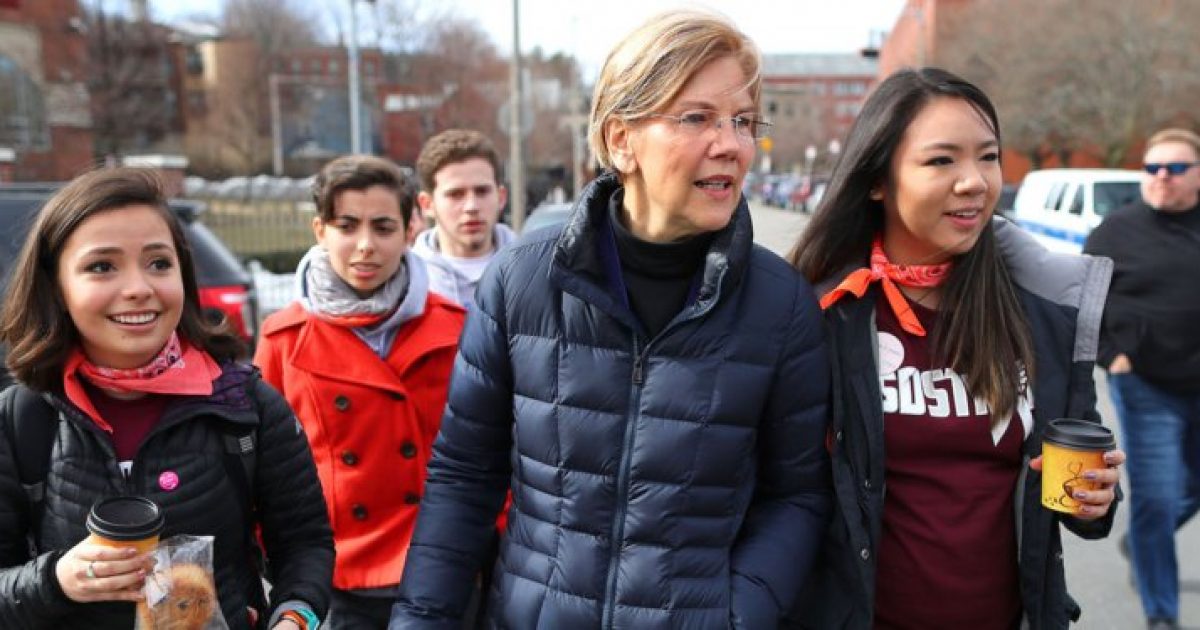 As Democrats pull out all the stops on moving the united States into full-blown socialism, a system that benefits the political elite and their wealthy sycophants while disparaging everyone else, the campaign promises made by candidates vying for the Democratic Party nomination for president are equivalent to “pie in the sky” fantasies.  Free health care, free college tuition and a “universal” income for all play to the portion of American citizens who want something for nothing, believing that government somehow makes money on its own instead of stealing from the populace.  Once the word “free” hits the air, the brains of these citizens turn off and the sense of entitlement takes over.

Politicians like Sen. Elizabeth Warren claim to want free college tuition for anyone who wants to attend an institution of higher indoctrination in order to increase the number of individuals graduating from college.  However, it is a political ploy to garner votes.  Because even in countries where college is supposedly “free” and the costs low, the number of college graduates has not increased for a number of reasons.

Indeed, in many countries with tuition-free college (or ultra-low tuition rates), there are fewer college graduates (proportionally speaking) than in countries with significantly more expensive college costs. This correlation doesn’t prove causation, of course, but when we examine how “free” colleges must control costs, we can see why tuition-free higher education ends up limiting access to higher education.

And, here is the crux that citizens advocating for “free” college and politicians promoting “free” college either ignore or don’t grasp – in order to provide something for “free”, it requires some type of “rationing” or limitation.  While many people in the united States believe that outside the united States offers “free” college, the Mises Institute states that “only a handful of countries offer tuition-free college.  “Among large countries with more than ten million people, only France and Germany qualify as ‘tuition-free’.  Meanwhile, Japan, Australia, Britain and Canada all require significant out-of-pocket payments from students.”

Moreover, the article at the Mises Institute cited a 2010 report by Alex Usher and Jon Medow that indicated college is not really “free” anywhere, but the cost is certainly lower in some places than others.  The question remains if lower college costs “translate” into more individuals graduating and individuals having more education.  In countries where college is touted as “free”, particularly France and Germany, those individuals completing college is lower than those countries where college has a higher cost.  This flies in the face of what politicians and free-tuition college advocates portray to the people – college is accessible to all in “industrialized” countries and at a much lower cost.  But, there is a problem with this assumption.

The problem with this reasoning — and a clue as to why college-completion is lower in the “no-tuition” countries — can be found in the inherent conflict between the two phrases “open to all” and “at a very low price.”

In the real world, no scarce resource can be both open to all, and also very inexpensive.

The first and easiest thing to do is limit the number of students with admissions standards. This can be done by raising requirements for test scores and mandated course work completed prior to enrollment at a higher education institution. How this is done varies considerably from place to place. Germany, for example, employs a number of fairly robust admissions requirements. France, meanwhile, employs the baccalauréat exam system, designed to reduce the number of people eligible for a college education. [Emphasis Mine]

So, like all other “socialist” policies, there is a “rationing” or “restriction” of who can access this “universal free-tuition” college education.  This means that those individuals who want to go to college may not be able to go if he or she cannot get past the “gate-keeping strategies.”  If one does get past the gate-keeping strategies, one might expect to have larger class sizes and fewer perks.  But, no anti-constitutionalist running for the presidency espousing implementing “free college for all” mentions any of this to the public.  Why?  They absolutely have no intention of implementing a “free for all” college education;  they are only interested in obtaining the office of the presidency at any cost.

The problem here [from the student’s perspective] isn’t with the cost of the education, but with the huge amount of tracking, testing, and winnowing that is used to help keep the system free. In America, virtually anyone can get a college education so long as they have the money to pay for it. In France, you can get an excellent, free or nearly-free education but often only if you follow a prescribed set of rules and pass a series of grueling tests that often start early in high school.

French teenagers go through their first major career sorting at around age 15, when they decide on an academic or vocational course of study. This choice determines what kind of high-school graduation exam, or baccalauréat, the student will sit for, and to some extent what kind of higher education is open to them. The choice of track is also not entirely up to the students; the head of their lycée, or high school, has the final say. There’s some ability to change tracks, but it’s not particularly easy.

The second method of limiting enrollment involves lowering quality through decreasing access to faculty and staff and lowering the quality of facilities provided.  Through this method, students who gain access are indirectly encouraged to discontinue their higher education.  Whereas, in the united States, colleges and universities that are tuition-dependent are incentivized to keep students through better student-teacher ratios, higher quality facilities and additional staff in the form of para-educators, counselors, deans of various departments and remedial specialists.  In France, a tradition of making student life difficult is a time-proven method of controlling enrollments, with class sizes of 1,500 being common.

So, while higher education may be touted as “free” or low-cost in some European countries, the system is structured in such a way to limit enrollment or encourage drop-out.  And, in most European countries, higher education constitutes a type of entitlement in middle and upper-middle-class families whose children already attend college and defend controlled entry as well as opposing increase in tuition rates.

The mistake in thinking made by some American citizens when hearing charlatan political hacks tout “free college” is assuming the current system of flexible open-access to the university system will be sustained.  These citizens believe class sizes will remain relatively the same as well as the same access to faculty and staff.  This is faulty thinking but falls along the same lines as a socialist nation where everyone gets the same housing – usually the standard 3 bedroom, 2 bath ranch, the same car and same pay for any job.  However, the reality is starkly different.  Instead of the lower classes being moved upward and the middle class remaining at their current status, the middle class is destroyed, moved downward to a poverty state along with everyone else.  Those who remain the same or improve are the wealthy and the political elite.

The point to take away is that some American citizens have lost the Christian work ethic upon which this republic was founded.  Instead of being self-driven to provide for themselves and govern themselves, these citizens have become driven to push government to steal from their fellow citizens to provide their sustenance and to direct every facet of their life.  In other words, these types of American citizens have become lazy, apathetic, and lawless.  They mind not trampling upon the rights of others while voluntarily relinquishing their own rights to be set down on the plantation of an all-powerful government in a state of slavery.

And, these same citizens will vote for politicians who will promise anything, deliver nothing and push to eradicate every God-given individual unalienable right through lawless legislation.  But, no matter how many times they are told the truth, they refuse to accept it, thinking their idea of socialism is what will be implemented when it is the ideology of the politicians that will be the reality.  Unfortunately, some politicians are so far gone to the dark side of being anti-constitutionalist that minoritarianism will become the norm – that is, if the rest of the population remain silent.