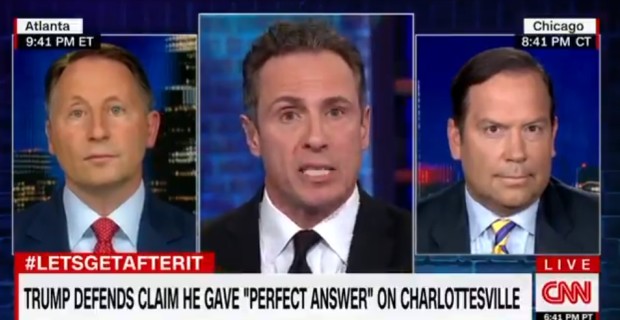 CNN’s Chris Cuomo says Antifa, the group that routinely uses political violence to advance its agenda (otherwise known as terrorism) does so for a “good cause”.

The context of the conversation was the claim that Trump called Charlottesville neo-nazis “very fine fine,” something which provably didn’t happen.

“You talk about Antifa – I’ve watched them in the streets protesting in different situations – there are certainly aspects of them that are true to a cause – that is a good cause – they want social justice,” said Cuomo.

CNN’s Chris Cuomo says Antifa is “a good cause” pic.twitter.com/mCMgoyPszQ

In just the last 24 hours alone, two stories emerged proving yet again that Antifa is a violent domestic terror group.

A Muslim convert who was radicalized by Antifa-style left-wing rhetoric planned to bomb a right-wing rally and cause “as many casualties as possible” by building a nail bomb which could “penetrate the human body and puncture internal organs”.

In addition, an FBI report which was released to the San Diego Union-Tribune described how left-wing Antifa activists schemed with a drug cartel associate to stage an “armed rebellion” at the US/Mexican border.

This is not the first time Cuomo has praised Antifa. He seems to be content with dying on the hill of supporting a group of masked thugs which routinely attacks innocent people, including in one instance for the ‘crime’ of carrying an American flag.

Good luck with that, Chris.