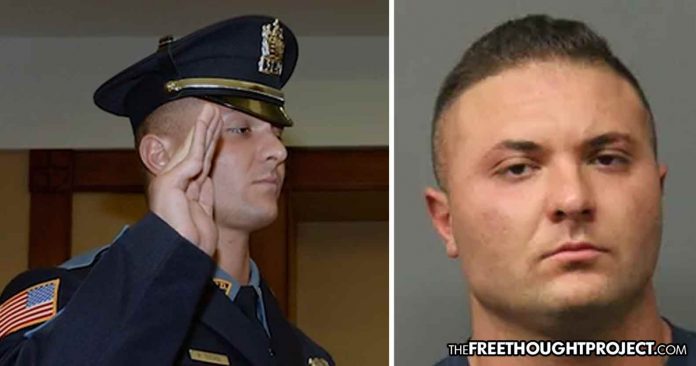 Trenton, NJ — Cops in the Trenton, New Jersey area have been in the media for multiple acts of brutality and corruption recently. Now, however, they are making headlines once again — this time, for attempting to have sex with children. It’s not just cops either, members of the clergy and public school system were also arrested.

This month, officers with the Internet Crimes Against Children (ICAC) Task Force carried out a sting called “Operation Home Alone.” The sting set up fake profiles on multiple social media apps in which officers pretended to be young children. When the predators would seek the children out for sex, instead of meeting a child, they met the undercover cops.

During the sting, which lasted just four days, law enforcement members made 16 arrests.

“The 16 men we arrested allegedly used social media to stalk victims they believed were vulnerable children who could be sexually exploited. Fortunately, their victims were really undercover officers prepared to put them in handcuffs,” said Attorney General Grewal through a statement.  “Parents need to know that the profiles of underage girls and boys we posted on social media to catch these offenders could easily have been profiles of their own children, who might also be targeted by predators on chat apps and popular gaming sites.  Our message to parents with Operation Home Alone is be on guard.  Our message to child predators is law enforcement is working overtime to find you and arrest you.”

One of the suspected child predators is 28-year-old Peter Tuchol Jr., a resident of Waldwick and police officer with the Ridgewood Police Department. Since his arrest last week, Tuchol has been suspended from the force.

According to a now-deleted Facebook post in February from Ridgewood PBA Local 20,Tuchol was given an award by the Police Department. Now, however, this man is dishonoring them.

While he was on his way to have sex with a child, Tuchol was also in possession of steroids— a not so uncommon drug used by law enforcement across the country. Judging from his court appearance photos, Tuchol has been on steroids for quite some time.

Had Tuchol been meeting an actual child, it appears that he would have been okay with her fighting back during the sexual assault.

According to police, they set up multiple fake profiles pretending to be children and the predators contacted them.

“The defendants typically initiated contact based on profiles posted on social media platforms by the undercover detectives and agents.”  Some of the apps which were used included Skout, Kik, Grindr, Tinder, Adam4Adam, and MeetMe.  “Once chatting began, the undercover officers clearly identified themselves as underage girls or boys.  Despite that information, the defendants allegedly engaged the purported ‘children’ in conversations about sex and made arrangements to meet the ‘children’ for sex.”

Also arrested during the sting was Kevin Roth and Roger Arroyo. Roth is a teacher at the High School of Computers and Technology in Bronx, N.Y. and Arroyo is a preacher from Philadelphia.

“Parents need to be aware of their children’s activities on the internet, and if children appear anxious or evasive when this topic is raised, it may be a red flag,” Grewal said.  “It is critical that parents talk to their children about social media and chat apps to let them know that the people they encounter may not be who they initially seem to be.”

“While it is a primary function of law enforcement to protect all of our residents,” Acting Bergen County Prosecutor Dennis Calo said, “the focus of this particular initiative was the protection of our most vulnerable – our innocent children.”

Sadly, as this example highlights, members of this law enforcement group are often some of the worst predators.

As TFTP reported in February, report from the Hawaii State Commission on the Status of Women paints a disturbing picture of law enforcement and their role in sex trafficking. The report found that instead of preventing child and adult sex trafficking, many police officers are participating in it. In fact, nearly half of all the sex trafficking victims surveyed noted that police took part in their abuse.

“The corruption of members of the criminal justice system reported by the participants in the study was pervasive in their stories of being prostituted,” the report noted.

The report found that the average age of those being trafficked is just 14-years-old, showing how early the abuse began.

One of the victims interviewed, who wished to remain anonymous for obvious reasons explained that “the same people that are charging you for prostitution are the people turning around and buying it from you.”