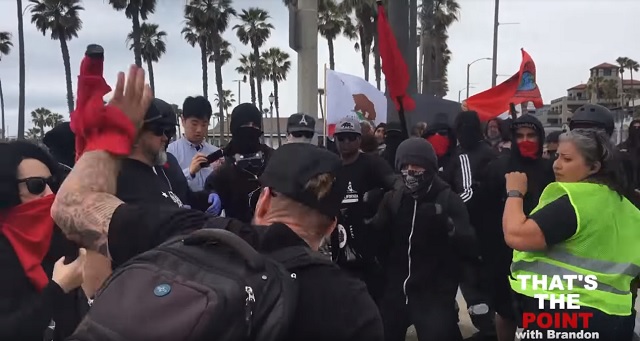 Editor’s Note: When will these terrorists ever be stopped? The more and more these mobs get away with, the bolder they get. How much longer will it be before they actually kill someone. Just something to think about…

A mob of masked antifa goons were filmed violently assaulting an independent journalist at the “March to End Sanctuary State” on Saturday in Huntington Beach, California.

YouTuber “THAT’S THE POINT with Brandon” shared video of the attack which shows him approaching the group to ask why they’re wearing masks.

Antifa goons were seen laying hands on him immediately and eventually attacking him with sticks. Despite being outnumbered around ten to one, Brandon managed to fend them off and deliver solid blows against his attackers in self-defense.

Huntington Beach police said they arrested five people, according to the OC Register.

Though the media loves hyperventilating over rhetorical attacks on journalists, this physical attack on an independent journalist appears to have merited only one news article from the local news outlet the OC Register.

Independent journalist Ford Fischer of News2Share also shared video showing the aftermath of the attack with several antifa being arrested.

“Today antifa and other left-wing activists counter-demonstrated a ‘March Against Sanctuary State’ pro-Trump protest in Huntington Beach, CA. Three were arrested after a pro-Trump Youtuber was hit in the head, causing it to bleed. It is unclear whether all three participated in the attack.”

“While three were arrested, the injured Youtuber said only knows ‘for sure’ that one hit him, and says he ‘doesn’t know about the other on’ He thought only two were arrested.”

Here’s some photos from reporter Brian Rokos of The Press-Enterprise:

There are also counter protestors. pic.twitter.com/e4aJdG3wQj

Looks like the 2 pm marches from 2nd Street to Huntington Street are delayed. The protestors, separated by PCH, are busy shouting slogans and comments at each other and motorists. pic.twitter.com/tBpsYeSLGK

This is Kristopher Dreww, 30, of Huntington Beach. He supports the repeal of SB 54. He said too much money is being spent in support of illegal aliens that he said would be better spent on legal residents of a state where taxes are high. pic.twitter.com/0bEjFLoHAm

Someone has been taken into custody, to the delight of the anti-54 group. Looks like two arrested. I don’t know why. pic.twitter.com/XPAW5l1zFt

(Cont) Says Becht: “I’m here to refresh peoples’ memories about the lost ones. The victims of illegal aliens.” He wants SB 54 repealed because sanctuary cities “aid and abet this turmoil across the nation.”

Many members of the anti-54 group marched east on PCH about 3 p.m. Tourists on both sides of the street unwittingly found themselves mingling among the protestors. pic.twitter.com/XG1ZOfH2TS

Antifa started another fight with right-wingers near the same spot in Huntington Beach at a “Make America Great Again” rally on March 25, 2017:

Several of the pro-Trump activists who fought with antifa were later identified as members of the white nationalist “Rise Above Movement” and were hunted down and arrested by the FBI under the leadership of Trump-appointed FBI director Christoper Wray.