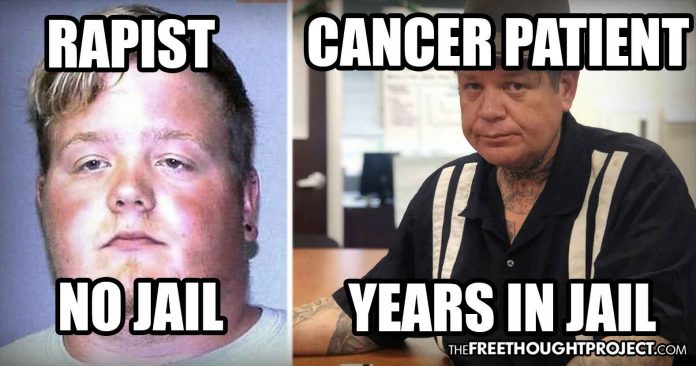 Editor’s Note: BREAKING! Our justice system is badly out of balance. This is not news to anyone who is paying attention. Matt Agorist shows us just another glaring example of American Injustice. A Bus Driver who raped a student gets a slap on the wrist, while a dying man may go to prison for trying to ease his own suffering. What’s wrong with this picture? -Dean Garrison

Watertown, NY — If ever you feel that the state has your interests in mind when they provide their mandatory “protection” through this system of law enforcement, consider the following scenario which completely negates that idea.

This week, Shane Piche, a school bus driver, pleaded guilty to raping a 14-year-old girl who rode his bus.

Last year, Piche lured the child to his home after school where he gave her alcohol before raping her. He admitted to the facts of this case, yet the legal system which is ostensibly in place to protect society’s most vulnerable didn’t give him so much as a slap on the wrist.

For this horrific act, Piche will spend the next 10 years on probation — but he won’t see a single day behind bars — a terrifying notion indeed.

“I wish Shane Piche would have received time in jail for the harm he caused to my child. He took something from my daughter she will never get back and has caused her to struggle with depression and anxiety,” the victim’s mother said after hearing the judge’s ruling this week.

Here, we have a man who admitted to luring a child to his home, essentially drugging her with alcohol and then raping her, and he will not spend a day in jail. Meanwhile, entirely innocent people — who have harmed no one — but have been caught with a plant, are being thrown in cages by the hundreds of thousands.

Adam Wanko is one of those people. Wanko is a 48-year-old cancer patient who had a medical marijuana card to legally possess cannabis when he was pulled over and thrown in a cage for having marijuana wax.

“I don’t know if I’d be alive right now if I didn’t have it,” Wanko said. “My doctor was going to cut me off of the treatment because I lost 80 lbs over a period of weeks and I was emaciated.”

Luckily for Wanko, cannabis gave him back his appetite so he was able to gain weight and continue the chemo. This plant is arguably responsible for saving Wanko’s life, yet he was kidnapped and thrown in a cage for having it.

“He asked me if I had any drugs in the car and I gave it to him,” Wanko said after he was pulled over, thinking he was well within his rights to have this substance.

So, he handed his medical card to the cop and told him about the marijuana.

“I knew that he was going to want to see that,” he said.

Wanko confirmed it was cannabis oil and explained he had picked it up from a medical marijuana dispensary, KJZZ reported at the time.

“When he came back, he informed me that he was going to arrest me for possession of a narcotic,” Wanko said. “I thought he was joking at first, but he never said ‘just kidding.’”

This public servant, hell bent on protecting society from dangerous cancer patients who would dare use a plant to help them through battling cancer, just knew he had to take this man off the streets. So, he arrested Wanko.

Because he was going broke paying for his chemo, Wanko could not afford to pay his bail and he nearly died in jail.

“I wasn’t able to see my doctor or go to my treatments. My dose of chemotherapy took three days to administer to me and I did it once every three weeks,” he said.

“I was telling them, ‘Look, I’ve got this condition, you know.’ But they weren’t sympathetic toward that.”

Luckily, after two weeks, a friend found Wanko in jail and paid his bail to get him out. But last year, Wanko was convicted for possessing the wax and he is now facing several years behind bars. He is scheduled to be sentenced later this year.

Other folks just like Wanko have been sentenced to several years for similar offenses, so it is very likely that he will be locked in a cage for years for using a plant that saved his life. And we call this “justice” in the land of the free.

As Jack Burns wrote, we want to know why. Why is it pedophiles get off scot-free and those who are reportedly trying to heal with natural medicine are kidnapped, jailed, and/or killed, all because of a God-given plant and its healing properties?

Studies show pedophiles have dozens of victims before they’re eventually caught or die of natural causes, and as this case illustrates, few of those who are convicted of crimes against children ever spend a day behind bars. Yet those caught with drugs are much more likely to spend serious time in prison for possession, and distribution, both typically non-violent offenses.

It’s high time we stop sending disabled Iraq War veterans, medical doctors, dads, children, wives and husbands to prison for a plant. It’s time we take action. Call your congressman or senator today and express your desire to see marijuana legalized, and those in prison for marijuana-related charges set free.

As Joe Rogan famously said nearly a decade ago, “Prison is for rapists, thieves, and murderers. If you lock someone up for smoking a plant that makes them happy, then you’re the f**king criminal.”

Please share this article so we can show others how crimes against children go unpunished while the state ruins lives over plants.