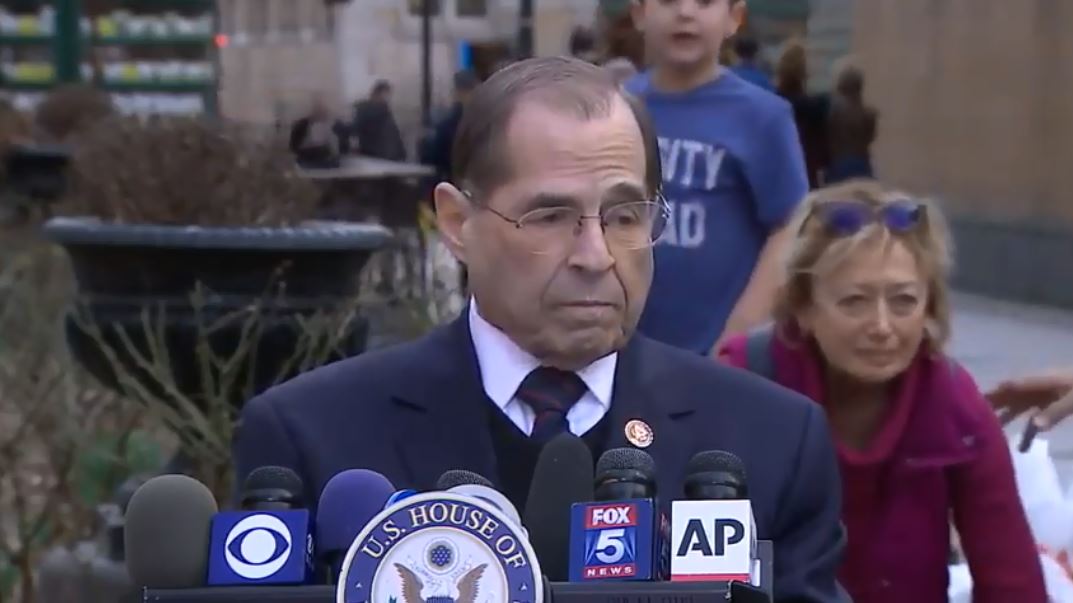 “Someone is in contempt of Congress, you send the Sergeant at Arms and you arrest them. Alternatively you fine him $20,000 a day, whatever,” he said. “We could do this.”

Nadler and his fellow Democrats are seeking six years of Trump’s tax returns and documents relating to the Mueller investigation, which found no collusion between Russia and the Trump campaign.

The administration has called the demands unconstitutional and has promised to fight.

It’s not the first time Nadler has suggested arresting members of the Trump administration.

Nadler made the suggestion at a meeting of House leaders earlier this month, Bloomberg reported Wednesday. Nadler also went a step further and brought up the possibility of jailing Trump administration officials if they are found in contempt of Congress. Nadler admitted that plan is less realistic.

Democrats have issued multiple subpoenas this year, demanding six years of Trump’s tax returns and testimony from administration officials, who have thus far declined to appear in front of Congress.

But, the Examiner reported, while Congress can hold people in contempt, the matter is then handed over to the Justice Department “whose duty it shall be to bring the matter before the grand jury for its action,” according to the law, which states:

Whenever a witness summoned as mentioned in section 192 of this title fails to appear to testify or fails to produce any books, papers, rec­ords, or documents, as required, or whenever any witness so summoned refuses to answer any question pertinent to the subject under inquiry before either House, or any joint committee established by a joint or concurrent resolution of the two Houses of Congress, or any committee or subcommittee of either House of Congress, and the fact of such failure or failures is reported to either House while Congress is in session or when Congress is not in session, a statement of fact constituting such failure is reported to and filed with the President of the Senate or the Speaker of the House, it shall be the duty of the said President of the Senate or Speaker of the House, as the case may be, to certify, and he shall so certify, the statement of facts aforesaid under the seal of the Senate or House, as the case may be, to the appropriate United States attorney, whose duty it shall be to bring the matter before the grand jury for its action.