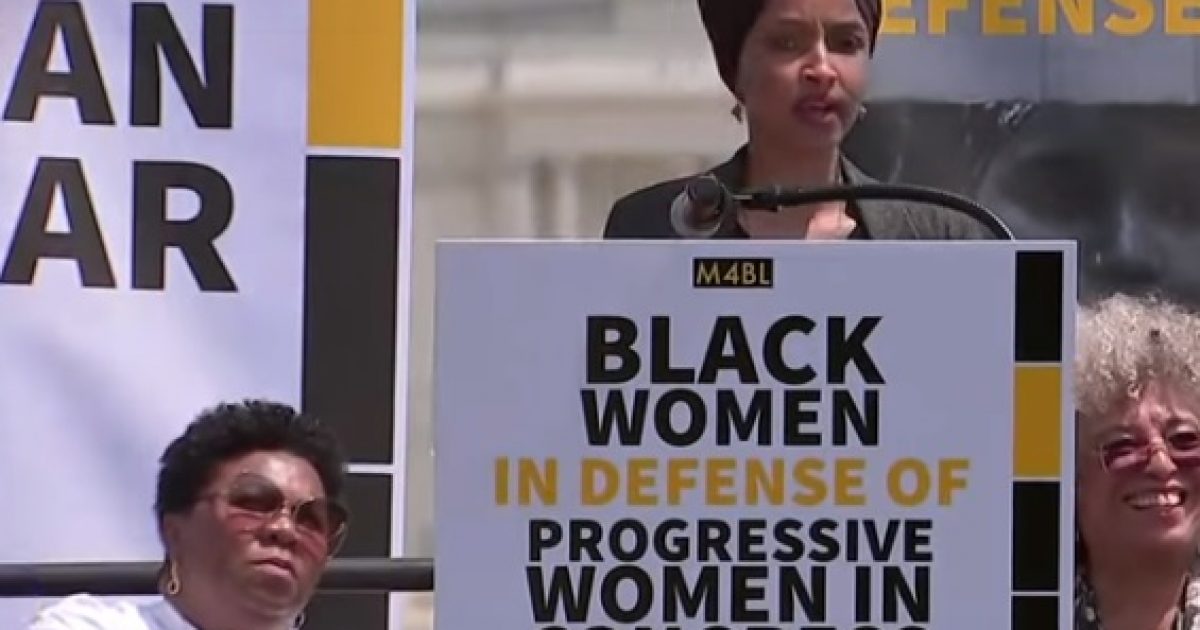 If you don’t see this woman’s devout Muslim beliefs and racism coming out, nothing will open your eyes to it.  Following the synagogue shootings in California last week, Minnesota jihad Rep. Ilhan Omar (D-MN) asserted on Tuesday that America “is not going to be the country of white people.”

“At this moment, the occupant of the White House and his allies are doing everything that they can to distance themselves and misinform the public from the monsters that they created that is [sic] terrorizing the Jewish community and the Muslim community,” the congresswoman told a crowd gathered in DC that promoted the color of their skin in an attempt to blame President Donald Trump for the synagogue shootings in a manner similar to that of Joy Behar.  “Because when we are talking about anti-Semitism we must also talk about Islamophobia. It is two sides to the same coin of bigotry.”

She added, “Just this week, when we’ve had the attack in California on a synagogue, it is the same person who is accused of attempting to bomb a mosque. So I can’t ever speak of Islamophobia and fight for Muslims if I am not willing to fight against anti-Semitism. We collectively need to make sure that we are dismantling all systems of oppression.”

Of course, she also said that Trump would call her home country of Somalia a “sh*thole,” which it is and why she and her family came to America, though she is trying to turn it into the same kind of hole as her homeland.

“When this occupant of the White House chooses to attack me, we know — we know — that that attack isn’t for Ilhan,” Omar said. “That attack is the continuation of the attacks that he has leveled against women, against people of color, against immigrants, against refugees and certainly against Muslims.”

Of course, the moronic and insanity didn’t stop with those claims.  Omar also went on to say that America “was founded on the history of Native American genocide, on the backs of black slaves” and later added, “This is not going to be the country of white people.”

First, America was not founded on Native American genocide nor was it founded on the backs of black slaves, who I might add were enslaved by black Muslims and sold to white men in Europe and to northern slave traders.  While those things did occur in our history, America was founded by white Europeans for the advancement of the Christian Gospel and the Kingdom of God and His glory.

IN THE NAME OF GOD, AMEN. We, whose names are underwritten, the Loyal Subjects of our dread Sovereign Lord King James, by the Grace of God, of Great Britain, France, and Ireland, King, Defender of the Faith, &c. Having undertaken for the Glory of God, and Advancement of the Christian Faith, and the Honour of our King and Country, a Voyage to plant the first Colony in the northern Parts of Virginia; Do by these Presents, solemnly and mutually, in the Presence of God and one another, covenant and combine ourselves together into a civil Body Politick, for our better Ordering and Preservation, and Furtherance of the Ends aforesaid: And by Virtue hereof do enact, constitute, and frame, such just and equal Laws, Ordinances, Acts, Constitutions, and Officers, from time to time, as shall be thought most meet and convenient for the general Good of the Colony; unto which we promise all due Submission and Obedience. IN WITNESS whereof we have hereunto subscribed our names at Cape-Cod the eleventh of November, in the Reign of our Sovereign Lord King James, of England, France, and Ireland, the eighteenth, and of Scotland the fifty-fourth, Anno Domini; 1620. -Mayflower Compact

What did Somalia give the world?  Oh, it gave Islam, starvation, murder… basically a “sh*thole” country, right?

“If I survived militia I certainly can survive these people,” she said after pointing to the Capitol.

This comes after her utter disregard for the victims and their families of 9/11 by callously saying, “some people did something” and her equally calloused attacks on US soldierswho were engaged in the “Black Hawk Down

Can you imagine a white Republican uttering, “This is not going to be the country of white people”?  Can you imagine the hew and outcry in the media and this Islamic jihad whiner?  It would be unbearable.

But because she’s an incompetent boob with black skin, who wears the untouchable hijab of her demonically inspired, murdering, thieving pedophile founder, Muhammed

, she gets a free pass.  She infiltrates America’s schools to speak with children and shuns the media and parents who wish to protest and be involved in her attempts to influence their children.  She is an ungrateful little girl who never grew up.

What I want to know is why she was not arrested for trying to cover for Islamic jihadis in Minnesota?  Why was she not arrested for bigamy and marrying her brother to defraud US immigration laws?

I can tell you why.  Her opposition in the opposing “party” is impotent when it comes to justice.  They simply will use it for politics to get people to vote for them and then sit on their hands.

The reason that Omar is able to speak out like this and act this way, is the same reason Barack Hussein Obama Soetoro Sobarkah and Hillary Clinton are allowed to do what they do today.  Republicans simply do not have the resolve to see it through to bring justice, and those of you thinking the tide is going to turn and you will see these people do a perp walk are sadly mistaken.  Things like this will be used to infuriate you so that you vote more “R’s” into DC for power, but you won’t get any justice, and you know what?  If I’m wrong, I will be the happiest man to ever live to tell you I was wrong, but I’m not.

Ilhan Omar should be arrested for her crimes prior to entering DC and she should be looked at as one engaging in sedition to the united States.