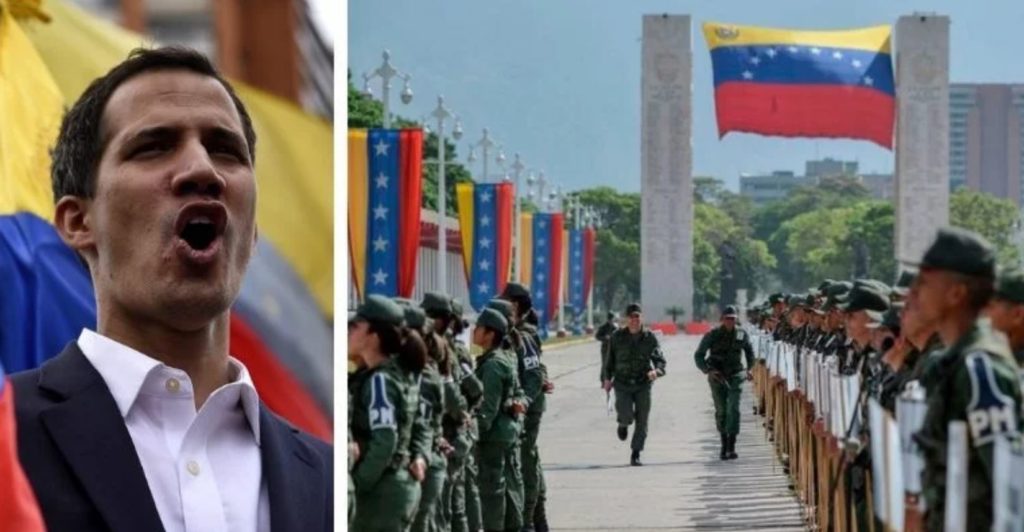 The turbulent situation that has been unfolding in Venezuela for the last few years reached new heights on Tuesday as opposition leader and self-declared “Interim President” Juan Guaidó attempted to wrangle power away from Venezuelan President Nicolás Maduro in what many are calling an attempted coup. Early Tuesday morning, Guaidó gave a press conference declaring that he has the support of the Venezuelan people and military, and demanded that Maduro step down. Guaidó also called on Venezuelans to take to the streets and call for an end to Maduro’s reign as president.

During the day’s events, cameras caught armored vehicles, reportedly belonging to the Bolivian military, running into crowds of protesters. Human Rights Watch (HRW) tweeted that 25 peopled were detained and dozens were wounded. HRW also noted that Venezuelan authorities shut down two international television channels and censored one radio station. “The regime should know that it will be held accountable for these abuses,” tweeted José Miguel Vivanco, Executive Director of HRW’s America Division.

Moncada also attacked the United States for what he said was another example of their interventionist policies, singling out President Trump and Vice President Mike Pence for their support of Guaidó. “This is one of the most strange and weird situations we are in now, which the superpower of the world is the main rogue state going around, without care, destroying countries, invading countries, and threatening with the use of force,” Moncada stated.

The Ambassador to the UN also noted that the United States’ use of sanctions amounts to an act of war and only hurts the Venezuelan people. “Sanctions kill, as simple as that. Sanctions are criminal sanctions, are weapons of mass destruction. You don’t see the smoke, but you see the effect, you see the deleterious effect of killing and suffering,” Moncada said. “The sanctions use banks sanction, sanctions use ships, sanctions use insurance companies, and financial blockades. They cannot just say that they are concerned about liberty or freedom or the children in Venezuela, and then exercise a ghastly, nasty policy of calculated cruelty. They are acting like torturers, it is a collective punishment.”

Indeed, the Washington D.C.-based Center for Economic Policy Research published a report last week which determined that U.S. sanctions against Venezuela were likely responsible for 40,000 deaths in 2017-2018.

The harsh reality is that Maduro is by no means a perfect leader and his support of censoring media, use of the military to suppress protests (whether engineered or authentic), his suppression of the opposition, and other despicable acts do need to be called out. However, Ambassador Moncada is also correct that the United States does act as an imperialist “rogue” nation, using force on any nation that does not follow the Western Imperialist agenda. Unfortunately, it seems that the Venezuelan people are caught between a leader who is unpopular in some circles and an even more unpopular self-proclaimed “Interim President” with multiple connections to the Western Empire.

Of course, if our readers are unaware of these connections, it is because the corporate media (CNN, WaPo, The Hill, and others) have been running non-stop coverage of why Guaidó should be accepted as the leader of Venezuela while ignoring any bit of evidence that the “uprising” might be less than genuine.

Despite the round-the-clock support of Guaidó, on April 13 The Grayzone exclusively reported that a who’s who of Trump advisors, right-wing Latin American officials, and Venezuelan opposition figures met to discuss “Assessing the Use of Military Force in Venezuela.” The meeting was hosted on April 10 at the Center for Strategic and International Studies (CSIS), a Washington-based think tank. This meeting included current and former State Department, National Intelligence Council, and National Security Council officials, along with Admiral Kurt Tidd, who was until recently the commander of the US Naval Forces Southern Command, overseeing operations in Central and South America.

The truth is that the Western Empire has been attempting to use Guaidó to install a puppet government in Venezuela. There is also evidence that the U.S. government and its intelligence agencies have attempted to take advantage of electricity blackouts in order to dethrone Maduro. In addition, there are a number of corporations and special interests who stand to benefit from the overthrow of Maduro and the crowning of Guaidó.

Although the American media has failed to report any of the above conflicts, there are still some Americans who are standing against the Venezuelan coup. A group calling itself the Embassy Protection Collective was invited by Venezuela’s government to protect the Venezuelan Embassy in Washington D.C. from illegal seizure by the U.S. government or opposition supporters. The group—which includes members of CODEPINK, Popular Resistance, the Answer Coalition, MintPress News and more—has been working to raise awareness on the attempts by the Western oligarchy to install another puppet government in Venezuela.

The reality of the situation in Venezuela is much more complicated than the likes of CNN would have the American people believe. Only by dissecting the lies from the American media, the Maduro government, and the Guaidó contingent can we hope to get to the truth and support the people who really matter: The Venezuelan People.

Derrick is the founder of TCRN.