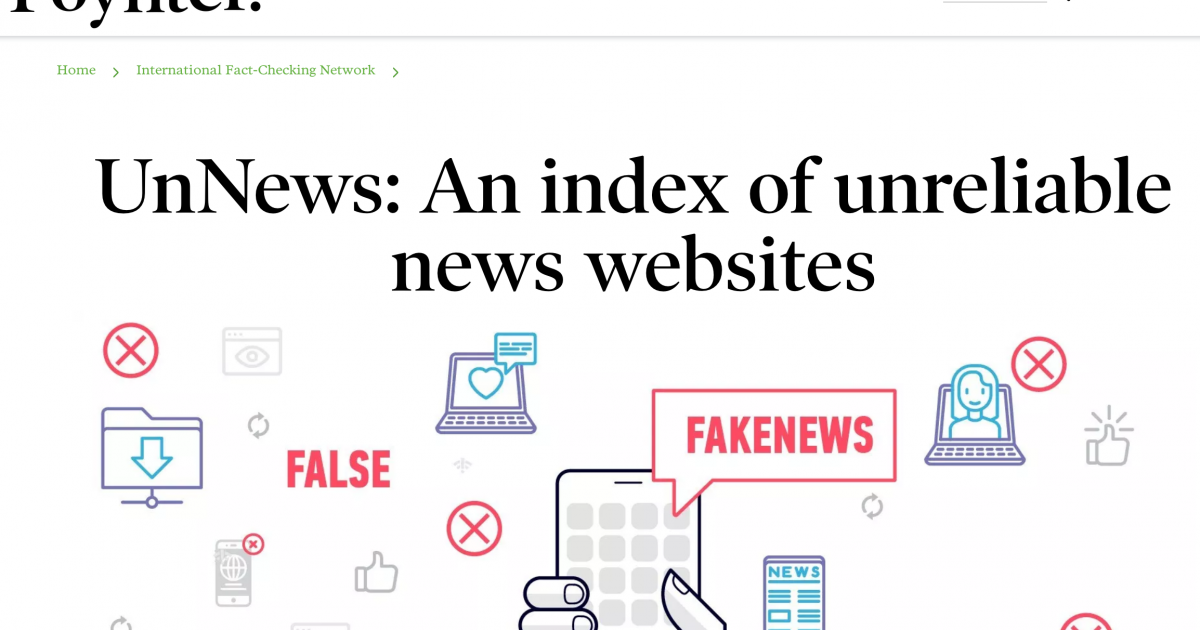 It’s always amazing when a new set of people come out and self-appoint themselves as “fact checkers” and determiners of truth, isn’t it?  They usually have been aligned with state-controlled media or social media and they often are tied right in with anti-American, socialist or Communist organizations.  The latest is true at Poynter where Southern Poverty Law Center‘s Podcast Producer Barrett Golding has made a list of over 500 sites he wants to be blacklisted, but you should be visiting, including one of my sites FreedomOutpost.com.

While attempting to sound above it all and intellectual, a person working for SPLC, whose founder and president have been outed as racists and sexists, some of the very things they pontificated on, can hardly be taken seriously when attempting to educate the public on what he claims are “unreliable news websites.”  And let’s not forget they hire criminals who “fix” hoax crimes.

However, with that said, there will be mindless drones who have grown up in the public indoctrination centers we call public schools and those who have not had a firm foundation of education here in America who will take Barrett at his word without producing one shred of evidence as to why these sites are any less reliable than say a worldwide network like CNN, that has been caught over and over and over fabricating “news” for decades.  But you won’t see the least trusted name in news in Barrett’s list.  Now, why is that?

It’s because Barrett is a propagandist, and he is intellectually dishonest, just like the others in the list that claim they are unbiased.

Watch how he does it.

Misinformation is a thriving industry on the internet, supported by social media shares, advertising dollars and political donations.

In the United States, scores of research reports try to measure how falsehoods spread online. These studies often require lists of untrustworthy “news” sources, but many of these lists have grown out-of-date and incomplete.

To create the index, we combined five major lists (see below), then eliminated the sites that were no longer active. We only used lists that were public and curated by established journalists or academics, contained original data (rather than information from other lists), stated their criteria for inclusion and defined how they graded different sites (see our methodology for more).

The index’s initial release relies on the five major lists’ determinations and definitions of “unreliable.” Our next release will include more sites and the criteria we used for inclusion.

But for now, here are the databases of unreliable news sites that we pulled from to create our index:

Politifact is another problem child, often covering for socialists and Communists in America.  They couldn’t even take the time after numerous calls to them to fix their story to point out that they completely maligned Freedomoutpost.com because another website took our story without permission and slapped a totally bogus headline on it, nor could they actually address the home visits in Obamacare.  And don’t forget how they set their own pants on fire covering for Barry Soetoro when he claimed he was the first American president from Kenya.

As for the others, well, they are more of the same.

The funny thing is that they claim “bias” on so many websites, as if no news outlet is ever biased.  Let’s get something straight, shall we?  Every reporter, every report, every video, every tweet, every news broadcast, every press conference, every news editor, every newspaper or website is… biased.  Every single one of them, including this writer.  I just tell you I’m biased.

Additionally, they like to pin the term “conspiracy” on some websites, but they never make any mention of the big networks like CNN, MSNBC, CBS, ABC or NBC and their Trump-Russian collusion conspiracy, do they?  Nope, even though it’s been debunked after they “reported” on it for over two years!

Barrett and Poynter, you’re both hypocrites!  But I’m not surprised, being at SPLC and all.

Now, with that said, I’m going to give you the list of over 500 sites you should visit this week, even if just to put a finger in the eye of these propagandists.  Some of the sites are clearly marked in their “About Me” section as satire.  There’s nothing wrong with satire.  If people share those as though they are real news, there’s no law against being stupid either, nor should we be blacklisting sites for that.  At least they are honest about satire.  I wish Poynter was honest about its propaganda, as well as major mainstream media.  Some sites clearly get very little right, but I would say the majority of sites in this list seek to reveal things that the mainstream “top 40 hits” media refuse to even engage, and that makes many of these sites important to you, if you wish to be thoroughly informed.