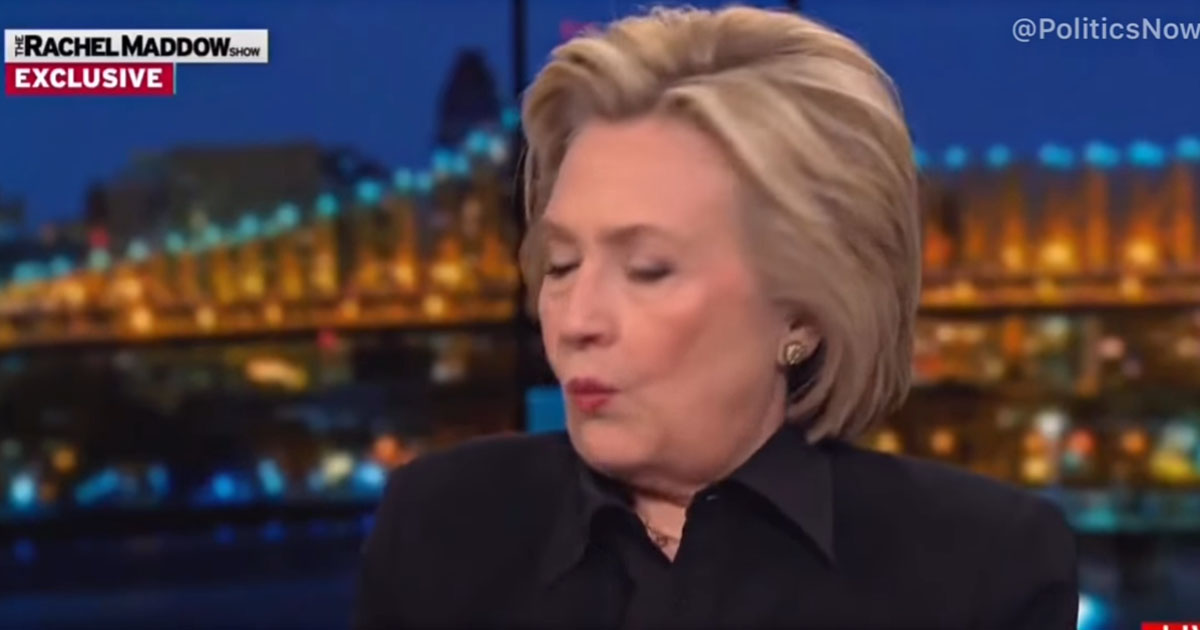 Frankly, I wish people would start seriously calling for the abolition of the Internal Revenue Service and the elimination of the 16th and 17th Amendments to the Constitution and quit focusing on people’s income tax returns anyway, which according to the Tax Code, don’t apply to the vast majority of Americans in the first place.  However, political opponents are always going to make this an issue for the other side, aren’t they?  The miserable failure of a presidential candidate and future presidential candidate, Hillary Clinton, who continues to be free to move about and speak against President Donald Trump because he has not brought justice on her as he promised, took to MSNBC to call on China to illegally obtain Trump’s tax records and attempt to make light of the collusion that she and others in her party did concerning Russia.

Here’s the clip from the Rachel “Madcow” Madow show.

Of course, what Ms. Clinton was doing was attempting to make fun of President Trump’s comments about Russia finding her deleted emails, which she illegally deleted from an illegal server she was never supposed to have in the first place, and even Barry lied about it.

“Let’s have a great power contest, and let’s get the Chinese in on the side of somebody else,” she continued further demonstrating just how anti-American she actually is.

Of course, we know the Clintons are both very cozy with Communist China, as during their time in the White House they not only soiled the Oval Office and a blue dress with Bill’s DNA but they also sold technology to the Chinese which moved many of their defense programs years into the future.

Here’s how she mocked Trump.

If you recall, then-candidate Trump was making fun of the fact that possibly Russia might find her deleted emails.

“If [the hacking] is Russia, it’s really bad for a different reason, because it shows how little respect they have for our country when they would hack into a major party and get everything,” said Trump. “I will tell you this: Russia, if you’re listening, I hope you are able to find the 30,000 emails that are missing. I think you will probably be rewarded mightily by our press.”

While Clinton wants to pontificate on the law, she sure was one who was happy to violate it with her email server and a host of things including selling the State Department in pay to play schemes that netted her, Bill and the Clinton Foundation millions.

Of course, she wanted to try and say that Russia was also aiding Republicans with absolutely no evidence.

The sad reality is that we not only have to listen to this Communist woman blather, but we are demoralized every time she appears as a free woman without justice being brought upon her head.  Everyone knows she is guilty, including the president, but nothing will be done despite the conservative pundits and talking heads we see every day proclaiming that the tide is about to turn.

No, it isn’t.  It’s just going to be used to drum up support for the “R’s” in 2020.  There will be no indictments of any of the big fish from the Obama administration.  You can count on it.  If I’m wrong, I’ll be the happiest man to be wrong, but I don’t believe I am.  Watch and see.