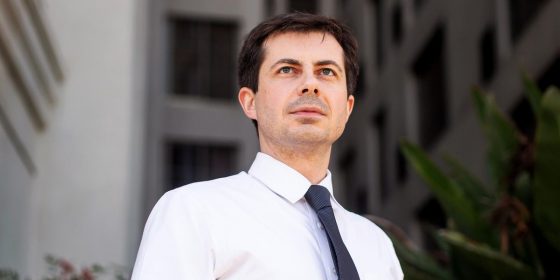 Anyone with even a remotely limited amount of logic knows that forced labor is slavery.  Concentration camps and Russia’s Gulags were two examples until democrat and presidential candidate Pete Buttigieg decided to endorse forced labor in the USSA.

While complaining to MSNBC‘s Rachel Maddow about what he sees as the United State’s lack of “social cohesion,” Buttigieg called for one year of national service as a solution. That’s forced labor, or gulags, or slavery no matter how you decide to slice it up. The USSA seems a more appropriate acronym to use when democrats discuss ideas.  As Reason so aptly put it: no doubt he would take offense at any comparison of his scheme to chattel slavery—a comparison such as that offered by former slave Frederick Douglass.

“What is freedom? It is the right to choose one’s own employment. Certainly, it means that, if it means anything,” Douglass thundered in response to Union General Nathaniel P. Banks’s policy as military commander of Louisiana of extracting one year of forced agricultural labor from freedmen on behalf of the federal government. “And when any individual or combination of individuals, undertakes to decide for any man when he shall work, where he shall work, at what he shall work, and for what he shall work, he or they practically reduce him to slavery.” –Reason

Although Buttigieg didn’t explicitly call for conscription to build “social cohesion,” he made it seem as though that’s an option. He allowed himself a little deniability by telling Maddow, “One thing we could do that would change that would be to make it, if not legally obligatory, but certainly a social norm that anybody, after they’re 18, spends a year in national service.”

It sure sounds like somehow, Buttigieg wants everyone to volunteer themselves for service to the government. It would be nice to know how he’d enforce any such human rights violation without force and putting guns to the heads of those who refuse to comply. And the public seems to disagree with his enslavement idea.

A 2017 survey by Gallup found 49 percent of Americans favoring the idea and 45 percent opposed. Unsurprisingly, support for mandatory national service rises among older cohorts who are highly unlikely to ever receive a draft notice, winning the nod from a solid two-thirds of those over 65. By contrast, the 18- to 29-year-olds actually targeted by forced labor schemes despise the idea by 57 percent to 39 percent. –Reason

Buttigieg seems to think that allowing a choice of civilian or military tasks to fulfill the whims of politicians addresses concerns about mandatory national service. But when compared to historical slavery, telling a slave they can choose to pick cotton or they can sow seeds still isn’t freedom.

After General William Westmoreland objected that he did not want to command “an army of mercenaries” as he characterized paid volunteers when he and Milton Friedman famously sparred (PDF) over ending the draft during the Vietnam War, Friedman riposted, “would you rather command an army of slaves?”-Reason

Welcome to the USSA! A communist’s paradise, where freedom is now forced labor and the Democrats want to hold the whip.