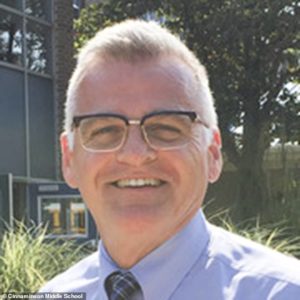 From Daily Mail: A New Jersey middle school teacher who had a sexual relationship with a 14-year-old girl who fell pregnant at 16 while he was a Catholic priest will be allowed to keep his current job, a state arbitrator has said.

Former Rev. Joseph DeShan, 59, left the priesthood in 1994 after a sexual relationship with the teenager which resulted in their baby. He is said to currently earn more than $85,000 annually teaching reading to sixth-graders.

Now DeShan, a 22-year employee of the Cinnaminson School District, will stay in his role at Cinnaminson Middle School despite complaints from parents of students there, according to documents. He had also told a female student she had ‘pretty green eyes’, according to the ruling.

He was accused of ‘conduct unbecoming of a staff member’ and there were complaints children felt unsafe being taught by a ‘rapist’ and a ‘pedophile’.

DeShan served as a Roman Catholic priest in Bridgeport, Connecticut, when he got the girl pregnant but was not prosecuted there.

The ruling states: ‘The student reported that the comment made her feel “uncomfortable.” The student further noted that DeShan made the comment in a “weird voice.”’

The seven-page document also noted that Cinnaminson officials first learned of the veteran teacher’s relationship with the teenager in 2002. The girl is understood to have been fired from her job at the rectory and police were not told when she fell pregnant, The Connecticut Post reports.

DeShan, who is said to have married a doctor and had two more children, told The Hartford Courant in 2002: ‘It was a consensual relationship that didn’t work out.’

Arbitrator Walt De Treux said: ‘The Cinnaminson Board of Education (BOE) has not alleged that respondent engaged in any inappropriate conduct while holding public employment. The fact that some parents now demand his removal from the classroom does not give the BOE a second opportunity to revisit pre-employment conduct of which it has been long aware.’

He added: ‘I find that the charges as they relate to alleged current conduct, i.e., the one alleged comment to the female student, are based on hearsay, and therefore, are procedurally deficient and must be dismissed.

‘As the conduct unbecoming charges are based on alleged hearsay complaints from parents and on pre-employment conduct that was addressed by the BOE 16 years ago , I find the tenure charges as to past conduct procedurally deficient and insufficient to support a charge of Conduct Unbecoming a Staff Member.’

He is said to have returned to teaching at the school after a three week suspension and De Treux said he cannot lose his job over an incident they’ve known about for 17 years.

Cinnaminson Superintendent Stephen Cappello told The New York Post: ‘Our district policy limits my comments in regards to open personnel and legal matters. We will continue to make decisions that are in the best interest of our students and educational community.‘