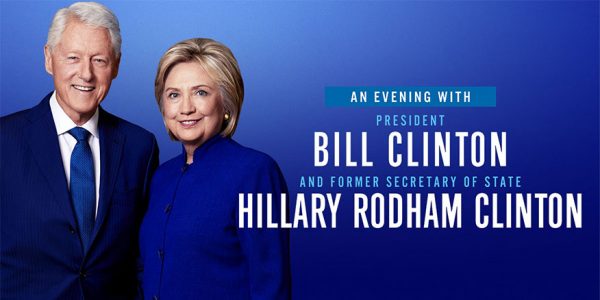 Editor’s Note: This “Evening With The Clintons” Tour has been a dismal failure. People are now forking out as little as $2 per ticket to see Bill and Hill. Seriously? Maybe it’s time for the Clintons to just fade away. All eyes on Chelsea…

The 2016 Democratic presidential nominee spoke with her husband at “An Evening With The Clintons” event on Saturday.

She claimed she is advising candidates about what it is like to have an election “stolen”. Despite evidence that the only interference in the 2016 election came from her campaign.

“You can run the best campaign, you can even become the nominee, and you can have the election stolen from you,” she said, according to CNN.

Clinton has suggested that she unfairly lost the 2016 election numerous times but also criticized President Donald Trump for saying the election was rigged against him.

On Saturday evening she acknowledged the state of the economy is good, but cautioned that other factors should go into selecting a president.

“It is the economy, it’s always the economy, but that’s not the only reason that we should elect a president, or in this case retire one,” Clinton said to cheers.

Clinton continued, “Yes, maybe the economy is still pumping along, but all of a sudden you’ve got tens of millions of Americans who are much less secure because their health care is gone.”

The tour “An Evening With the Clintons” wraps up on Sunday night in Las Vegas. Tickets sales have been slow throughout the tour and in some cases tickets have been slashed to as low as $2.00 a person reports PJMedia.

Clinton has not ruled out a second run for the presidency, but maybe with those dismal numbers, she will just quietly fade off into the night.