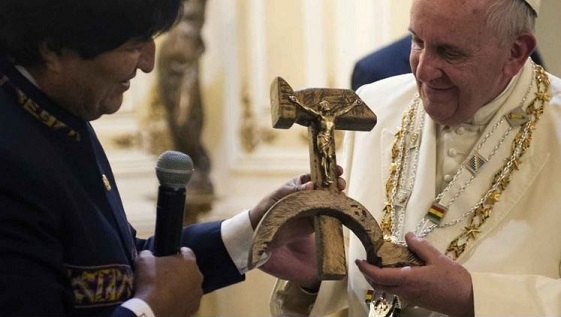 Dr. Eowyn’s post was first published at Fellowship of the Minds

Pope Francis, real name Jorge Bergoglio, is a neo-Marxist liberation theology adherent who, in May 2014, endorsed the redistribution of wealth by the state.

On July 9, 2015, he accepted from Bolivian socialist Evo Morales the sacriligious “Marxifix” — a crucifix in the shape of a hammer and sickle.

On May 3, 2019, speaking like the Green Nazi he is, Bergoglio blamed environmental degradation and the world’s poor on capitalism, calling it “a fallacious economic model that has been followed for too long”.

Catholic News Agency reports that Pope Francis made those remarks in an audience with 60 participants in the meeting, “Mining for the Common Good,” in the Apostolic Palace. The meeting was organized by the Vatican Dicastery for Promoting Integral Human Development. Mining industry executives from Latin America, Africa, Asia, and Canada participated in the meeting, along with Anglican, Methodist, and Catholic leaders “dedicated to development” — whatever that means.

In his remarks, Pope Francis blames the state of the world’s environment and of the poor (“the cry of the Earth and the cry of the poor”) on capitalism: “The precarious condition of our common home has been the result largely of a fallacious economic model that has been followed for too long” — an economic model that is “profit-oriented, shortsighted, and based on the misconception of unlimited economic growth,” which results in a “disastrous impact on the natural world.”

He said “We need a paradigm shift in all our economic activities” because capitalist economic powers “continue to justify the current global system where priority tends to be given to […] the pursuit of financial gain, which fail to take the context into account, let alone the effects on human dignity and the natural environment.”

If Pope Francis thinks the solution of the world’s environmental problems is to replace the “outmoded” economic model of capitalism with socialism, he is only displaying his ideological blindness and gross ignorance. Does he not know that, in addition to a human toll in the hundreds of millions, socialism/communism is an unmitigated disaster on the environment? As examples: