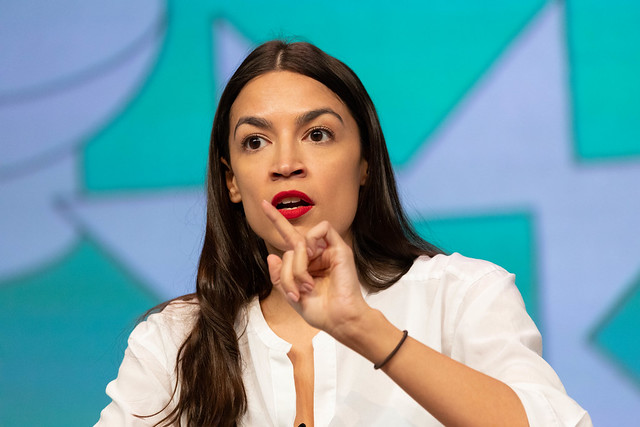 Editor: Is this the same AOC that didn’t know what a garbage disposal was? This is not an easy debate for me to judge. Ryan McMaken says this is a bad thing. McMaken is not a classic conservative, he is more of a libertarian. I respect the views of both Chris Menahan and Ryan McMaken. So in my case the tie-breaker would simply come down to this… When is the last time you remember a socialist proposing anything that would actually benefit our country? There has to be a hidden agenda here… There ALWAYS is. I think I’d argue that the Democrats stand too much in the way of  job creation and thus inhibit wealth creation. Sure the usury fiasco is outrageous, but do you really believe the Democratic-Socialists are trying to help the people? I don’t. That’s my opinion, here is Chris’ take… –Dean

New York Democratic Rep Alexandria Ocasio-Cortez on Thursday called for an end to usurious high interest credit cards and said the usury laws of the 1970’s (where usury ceilings were generally around 8 to 10 percent) were “common sense.”

Alexandria Ocasio-Cortez tweeted: “There is no reason a person should pay more than 15% interest in the United States. It’s common sense – in fact, we had these Usury laws until the 70s.”

There is no reason a person should pay more than 15% interest in the United States.

It’s common sense – in fact, we had these Usury laws until the 70s.

(Max interest rates are record-high for ppl with excellent credit, too.)

“This is crazy!”
“Just pay your bills!”
“You need higher interest for poor people!”

Most credit unions are subject to usury law; they’re quite sound. in fact, they’re the few who DIDN’T need a bailout in ‘08.

The two self-identified democratic-socialists are set to propose legislation on Thursday capping rates on credit card and other consumer loans and letting post offices offer low-cost basic financial services, such as loans and checking and savings accounts.

An outline of the plan released ahead of their formal announcement sharply criticized banks for charging on average more than 17% interest on credit card balances while they are able to borrow money at less than 2.5%.

With Republicans in control of the Senate, the proposal has little chance of becoming law any time soon.

Indeed, the GOPe just want to give our banker overlords giant tax cuts.

You have to applaud anytime politicians are criticizing usury.

That’s why we pair usury w/ support for a non-profit banking option esp in key communities: aka Postal Banking.

Big banks won’t service poor communities unless they make a killing off them – that’s why they charge predatory rates.

Doesn’t have to be that way w/ competing model. https://t.co/JHJNxcHQbC

In Texas, the average annual interest rate on a payday loan is 661%.

In Vermont, the payday loan industry doesn’t exist, because interest rates on small dollar loans are capped at 18%.

We must cap interest rates on consumer loans and credit cards at 15% nationwide.

This was solid rhetoric:

“I am sure it will be criticized,” Sanders said of the legislation. “I have a radical idea, maybe Congress should stand up for ordinary people.” https://t.co/Naax3OH3W5

This was not quite as good:

Banks make record profits discriminating against people of color and denying basic banking services to 63 million adults who are unbanked or underbanked.

We must allow every post office to offer basic, affordable banking services and end lending discrimination once and for all.

Forcing banks to give loans to people who can’t pay the loans back was the main cause of the 2007 crash. That said, taking our money back from the banks that we gave trillion dollar bailouts to is a great idea, especially when compared to giving them huge tax cuts!