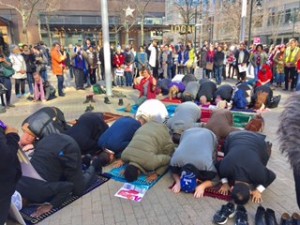 Here we go again. This is exactly the pattern that I meticulously document in my must-read primer, Stop the Islamization of America: A Practical Guide to the Resistance.  Amazon has already built Muslim prayer rooms (which I believe is a mistake).  But history shows us that accommodations to Islamic demands always gives way to more demands, more accommodation. Take for example, the Heinz company. Heinz has bent over backwards to accommodate their Muslim workers: they have prayer rooms, prayer times, etc. But Muslim workers sued anyway,  they want to leave for prayer. Heinz doesn’t want them leaving work to pray outside of scheduled break times. Mind you, they could easily pray before or after work, but no. This imposes Islam on everyone else.

It’s not about prayer spaces or prayer times. Muslims can easily pray before or after work. . They don’t stop the line  to pray in Iran. But in the West it is a way to impose Islam on everyone else. It’s about Islamic supremacism and imposing Islam on the secular society. Cultural icons are a favored target of this tactic: that’s almost certainly why Amazon was chosen for this showdown.

The idea is to establish and enforce the principle that wherever Islamic law and American customs, practices, business policies and laws conflict, the American side would have to give way. Accommodation always gives way to more demands, more accomodation.

This is the stealth, cultural jihad.

A lawsuit was filed on Tuesday against an Amazon warehouse by three workers alleging religious discrimination by the retail giant.

Among the complaints, the women claim that they were “denied adequate space and time to practice their religion.”

The litany of complaints include the deliberate institution of a “two-tiered system” that deliberately keeps “qualified” Somali and East African workers from advancing upward.

There are no specifics offered as to why the workers were/are qualified, just that they are often passed over for promotion.

One worker describes how her problems began:

“Around the second week of my employment with Amazon, I received my first write-up for falling below the set packing rate. Because of this write-up, I stopped taking breaks to perform the required ablutions before prayer, and I avoided going to the bathroom in order to maintain my rate and avoid additional write-ups,”

Admittedly, it has been quite awhile since I have worked in any capacity in the corporate world, but when I did I tried not to let my personal (religious) life get in the way of my expected work duties, especially during the first couple of weeks on a job.

Read the rest.
Courtesy of The Geller Report