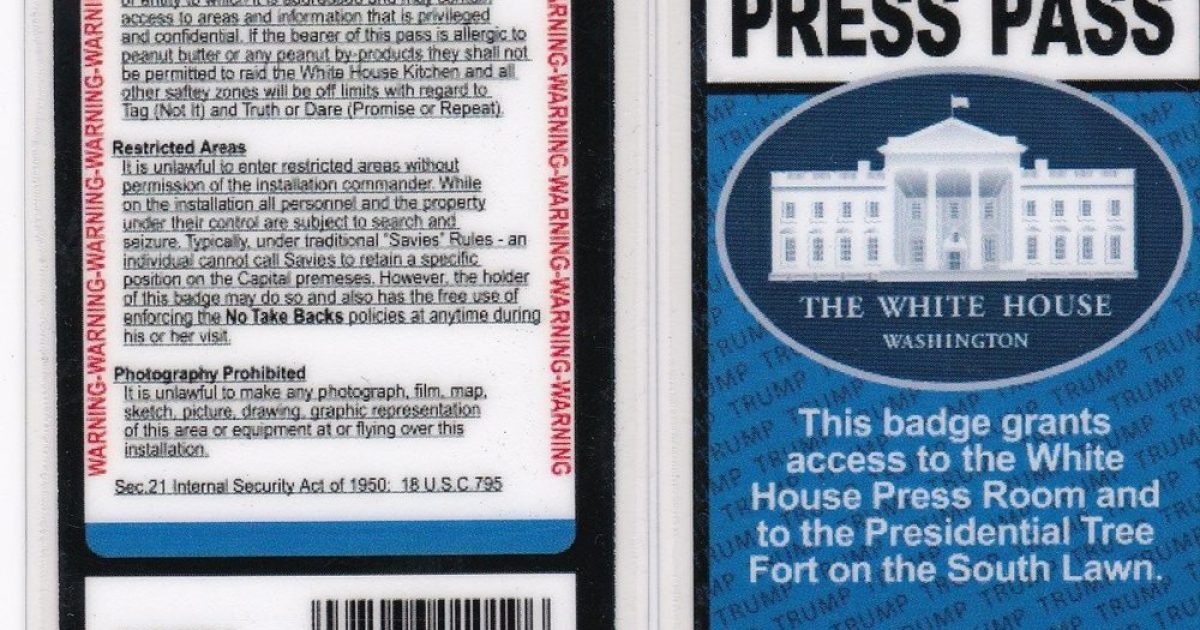 While media from the New York Times to CNN and FOX News supported Acosta in 2018, the reality is that no one is entitled to a White House press pass, and those that do get one, get it because they have to meet certain criteria and pass certain security background checks.  Furthermore, if the White House perceives that journalists are dealing with them unfairly, is it not fair to say that they will not allow them to be in the press corp?  It seems obvious to me.

However, Milbank is angry that he was not allowed to be a part of the White House press after decades of involvement, and understandably so.

For the past 21 years, I have had the high privilege of holding a White House press pass, a magical ticket that gives the bearer a front-row seat to history.

I was in the White House the night Bill Clinton admitted his affair with Monica Lewinsky, and the day he was impeached. I was there on Sept. 11, 2001, and the fearful days thereafter, when we were trained to use escape hoods. I watched George W. Bush make the case for the Iraq War and Barack Obama pitch his remedies for the market crash. There, too, I have witnessed the carnival-like briefings and high histrionics of Donald Trump’s presidency.

But no more. The White House eliminated most briefings and severely restricted access to official events. And this week came the coup de grace: After covering four presidents, I received an email informing me that Trump’s press office had revoked my White House credential.

I’m not the only one. I was part of a mass purge of “hard pass” holders after the White House implemented a new standard that designated as unqualified almost the entire White House press corps, including all seven of The Post’s White House correspondents. White House officials then chose which journalists would be granted “exceptions.” It did this over objections from news organizations and the White House Correspondents’ Association.

OK, so his press pass was revoked, and so were others, but interestingly enough, contrary to his headline, seven members of WaPo were allowed in the White House press.

The Post requested exceptions for its seven White House reporters and for me, saying that this access is essential to our work (in my case, I often write “sketches” describing the White House scene). The White House press office granted exceptions to the other seven, but not to me. I strongly suspect it’s because I’m a Trump critic. The move is perfectly in line with Trump’s banning of certain news organizations, including The Post, from his campaign events and his threats to revoke White House credentials of journalists he doesn’t like.

But Dana, “in line with Trump’s banning of certain news organizations, including The Post”?  Seriously?  Seven out of eight of WaPo’s reporters were admitted.

Now, don’t get me wrong, I applaud Trump when he does right and constitutionally and I condemn his behavior and words when they are unlawful, which he has done on several occasions and continues to do.  However, whether I am critical or supportive of what he does, does not entitle me to a White House press pass any more than Dana Milbank.

Milbank opined the elimination of briefings and other changes that he says “have devalued White House coverage.”

He then adds, “But there’s something wrong with a president having the power to decide which journalists can cover him.”

Frankly, that statement is just not true.  Milbank will undoubtedly write and “cover” Donald Trump.  Like the rest of us without a press pass, he just won’t be doing it in the White House.

In fact, he says so at the end of his article:  “I’ll keep covering the White House, albeit from a distance, and wait for things to return to normal — if they ever do.”

President Trump has no say so over journalists covering him and his policies, words or actions.  Journalists are simply going to report what they hear and discover.

I want a press pass, Mr. Milbank.  Will you go to bat for me?  Infowars wants one too, and they were some of the biggest supporters of President Trump.  I don’t hear you writing about the little guys getting “front row seats to history.”

In response, it seems, the White House established a clear — if nearly impossible — standard: no credentials to any journalist who is not in the building on at least 90 out of the previous 180 days — in other words, seven of every 10 workdays. The White House wouldn’t provide numbers, but it appears most of the White House press corps didn’t qualify for credentials under the new standard, including regulars for The Post and the Associated Press. (Trump, who has spent more than 200 days at Trump properties and many more on travel, is barely in the White House this much himself.)

To be fair, Milbank is correct about this and many have forgotten that Trump said he would be far too busy to be playing golf.  However, apparently, some met the criteria enough that they were allowed in, including seven of Milbank’s own colleagues at the Post.

Milbank also says, “White House officials offered me and others it disqualified a lesser credential called a six-month pass. They say it will grant equivalent access, but for various technical reasons, that isn’t true.”

However, he doesn’t explain those technical reasons.

Milbank says that the White House informed him that he had only been in the White House seven times in the past 180 days.  His response was that he had two foot surgeries, which kept him at home, but he says he never came close to the 90-day standard set by the Trump administration.

The fact is that the first presidential press conference took place under Woodrow Wilson in March 1913, and subsequent presidents have built on that to the point that the usurper, Barack Hussein Obama Soetoro Sobarkah, was having them virtually every day.

However, to claim the White House is curtailing “all journalists” is just a whopper of a lie.  Clearly, they are not as Milbank states from his own pen that seven of his colleagues’ press passes were not revoked.