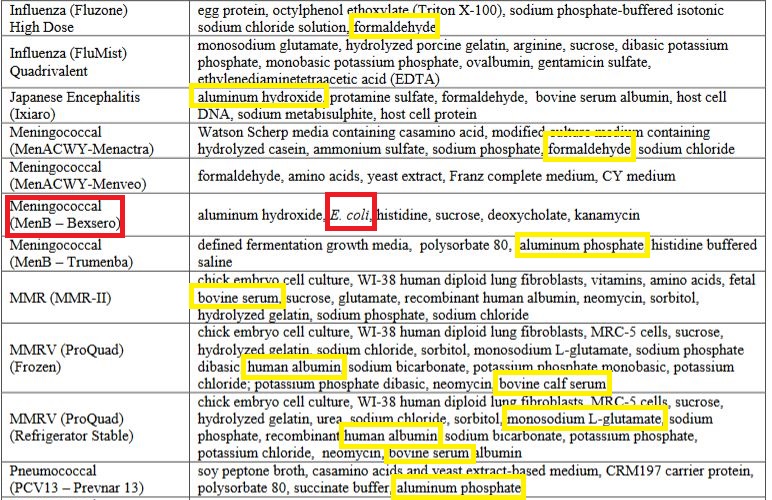 According to the federal government’s Centers for Disease Control and Prevention (CDC)’s Fact Sheet on Ingredients of Vaccines, additives are used in the production of vaccines. Those addictives may include:

Common substances found in vaccines include:

But not all vaccine addictives are harmless.

For 8 years, from 1955 to 1963, more than 98 million Americans received the polio vaccine. But it wasn’t until 60 years later, in 2015, that the CDC admitted that the polio vaccine had been contaminated with an ingredient — the cancer-causing Simian vacuolating virus 40 (SV40).

The latest WTF ingredient added to vaccines is E. coli.

According to the CDC, Escherichia coli (E. coli) are bacteria that live in the intestines of people and animals. While most E. coli are harmless and are an important part of a healthy human intestinal tract, some E. coli are pathogenic, meaning they can cause illness, either diarrhea or illness outside of the intestinal tract. The types of E. coli that can cause diarrhea can be transmitted through contaminated water or food, or through contact with animals or persons.

Christina England reports for The Truth About Cancer, April 29, 2019, that E. coli was recently added to the GlaxoSmithKline (GSK) Meningitis B vaccine, Bexsero.

Here’s the proof: a table of vaccine ingredients from the CDC’s “Pink Book” – Vaccine Excipient & Media Summary. (I added the red and yellow boxes.)

So You Understand What Type Of “Representatives” You Are Allowing To Occupy Office Today… I Ask, Did Our Veterans Die In Vain?
November 25th, 2020 Sons of Liberty Media

Alyssa Milano Attempts To Extend ‘Olive Branch’ To Trump Supporters, But They Aren’t Having It
November 25th, 2020 The Political Cowboy

Here is the evidence of election fraud and it currently includes hundreds of cases, encompassing millions of stolen or fraudulent votes
November 25th, 2020 DC Clothesline