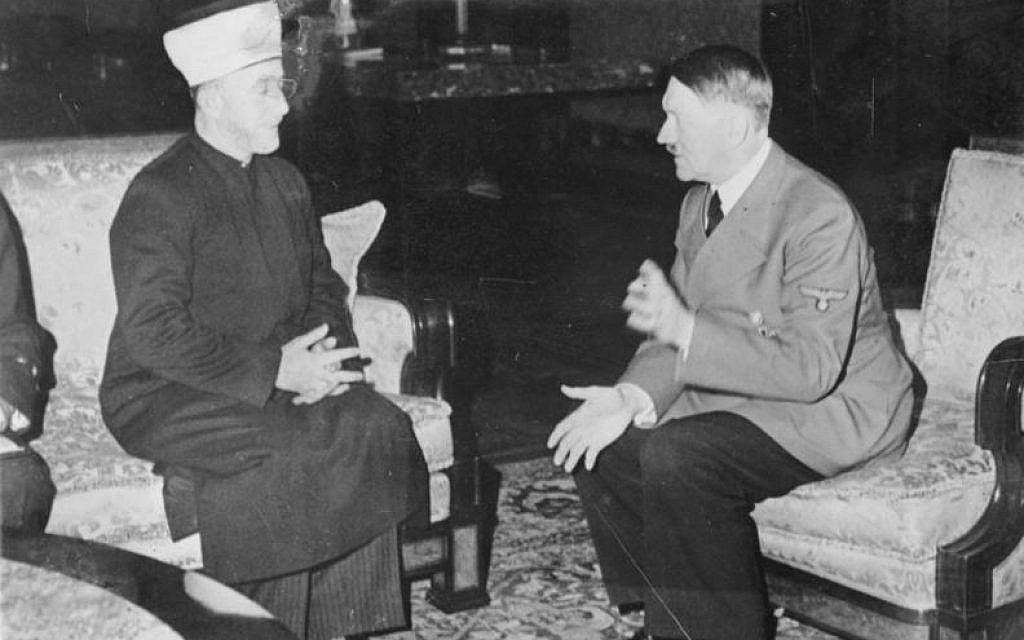 A big lie is a propaganda technique. The expression was coined by Adolf Hitler, when he dictated his 1925 book Mein Kampf, about the use of a lie so “colossal” that no one would believe that someone “could have the impudence to distort the truth so infamously”.

Following Hitler’s propaganda tactics, Tlaib tells the biggest lie of all. The Muslim world was aligned with Hitler. After the war the Muslim world persecuted, slaughtered and expelled their Jews from their countries. Close to one million Jews were expelled from Muslim countries when the Nazis surrendered and the Jewish state was established.

The world’s leading scholar on Islam, Bat Yeor, was a Jewess expelled from Egypt after the war:

Bat Ye’or: Later, after the war, the Muslim Brotherhood triggered a wave of assassinations and violent demonstrations against the British and mainly against Jews[,,,]

My parents recommended that we never speak of Israel or of any policy even with friends. We had the feeling of being spied upon, even by our Muslim servant. Then when Jews were arbitrarily jailed or expelled from their jobs, or the country, a climate of fear and insecurity shrouded us. Violent pogroms erupted; mobs killed Jews in the street, raped Jewish women, vandalized Jewish shops, and burned Jewish schools and hospitals. All Jewish assets were sequestered, including those of my father. Jews were fired from administrative jobs and liberal professions. We lived with the fear that life could end at any moment.

On 30 November, Israel and the Jewish world remember the fate of more than 850,000 Jews who were forced out of Arab countries and Iran in the 20th century.

This memorial day commemorates the tragedy of people who were forced to flee from their homes and to leave the countries where they had lived for millennia, solely because of their Jewish identity. Many were deprived of their belongings and many suffered from violence and persecution.

The story of the expulsion of entire Jewish communities from Arab lands is an important part of modern Jewish history that profoundly affected the Jewish nation as a whole as well as the demographic composition of the Middle East and North Africa. This is a story that has to be told.

Rep. Rashida Tlaib (D-MI) falsely claimed that Palestinians provided a “safe haven” for Jews fleeing the Holocaust, ignoring both the collaboration of Palestinian leaders with Hitler and Palestinian opposition to Jewish immigration.

Philip Klein of the Washington Examiner, who flagged Tlaib’s flagrant distortion of historical fact, noted that she made her comments “on a podcast called ‘Skullduggery’ in an episode titled ‘From Rashida with Love.’”

(Tlaib’s comments are at 28:11 in the podcast, offered in defense of her view that Israel should be abolished in a “one-state solution” to the Israeli-Palestinian conflict.)

In the interview, Tlaib said, “There’s always kind of a calming feeling I tell folks when I think of the Holocaust,” meaning that she felt a sense of moral reassurance because of “the fact” [sic] that Palestinians “to create a safe haven for Jews, post-the Holocaust, post-the tragedy and the horrific persecution of Jews across the world at that time.”

“In the presence of Ribbentrop, the Foreign Minister of Foreign Affairs, the Fiihrer received the Grand Mufti of Palestine, Sayid Amin al Husseini, as a cordial and meaningful conversation for the future of the Arab countries.” (German Federal Archive / Wikimedia Commons)

During World War II, the mufti was involved in the mobilization of support for Germany among Muslims. In November 1941, the Mufti met with Hitler. Although he continued to be involved in politics, al-Husseini’s influence gradually declined after the defeat of the Arab armies in 1948.

Many Palestinian Arabs vigorously — and violently — opposed Jewish immigration into Palestine, both before and during the Second World War, when it was clear that Jews faced persecution (and worse) in Europe.

Moreover, according to historian Benny Morris, Palestinian Arab leadership actually rejected a “one-state solution” offered by the British prior to the Second World War because the British insisted that they accept 75,000 new Jewish immigrants. They wanted a full stop to Jewish immigration.

Though there are several dozen Muslims who are recognized as having helped save Jews, these heroic acts occurred in other countries.

After the Second World War, Palestinian Arabs continued to oppose Jewish immigration, and Palestinian Arab forces attacked the nascent State of Israel, joining armies from surrounding Arab countries in an effort to quash the Jewish state.

Palestinian Authority president Mahmoud Abbas wrote his Ph.D. thesis denying aspects of the Holocaust, and delivered a speech in 2018 in which he appeared to defend Nazi Germany’s decision to murder Jews.