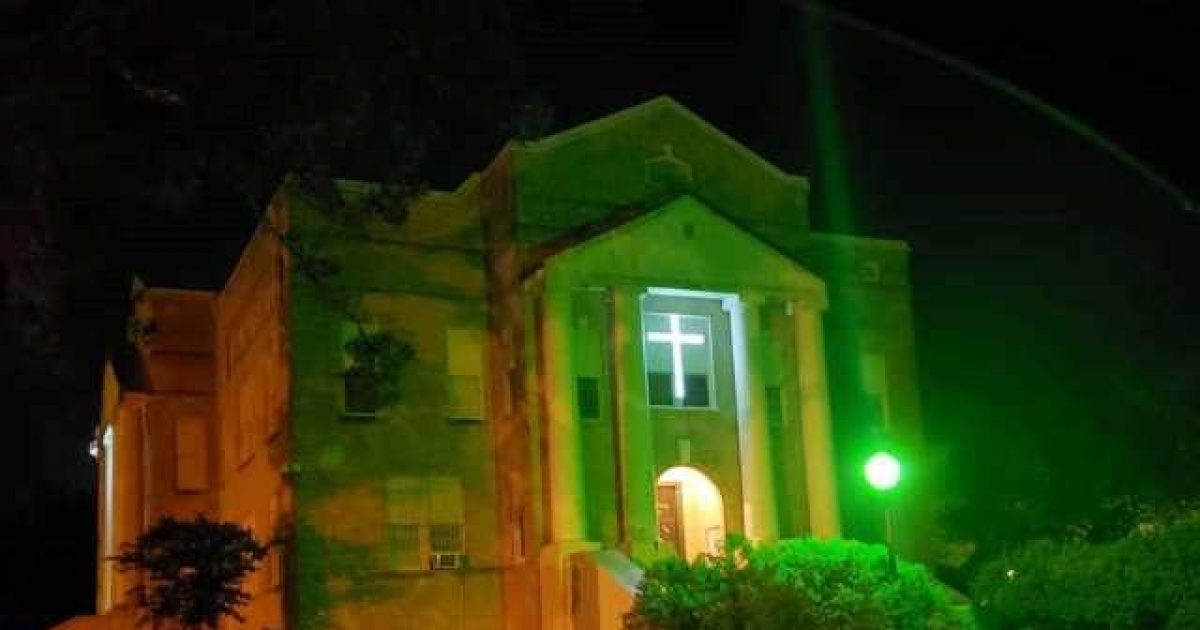 San Jacinto County, Coldspring, Texas – The Wisconsin-based FFRF (Freedom from Religion Foundation) demanded that San Jacinto County remove four crosses that were in their Courthouse. They declined. Instead, they lit the crosses up for all to see. There’s a battle in America – it’s a battle between those who choose to twist the Constitution to their liking, and those who love the Constitution and just want to be left alone to live their lives free of nitwits who constantly gripe about everything.

THIS is how we roll in San Jacinto County! Not only did we not cower to the Wisconsin Whiners, we Lit Them Up !

As long as the FFRF is able to cause cities and counties to cower to their constant intimidation, our freedom of religion is at extreme risk. Of course the FFRF isn’t the only group causing hostility and hatred toward Christians, but they are part of the problem. And they don’t just target crosses – they target speech and signs as well.

The foundation issued an “Action Alert” to its supporters on May 7th saying, “A concerned Coldspring resident reported to FFRF that San Jacinto County has the crosses up all year round and even lights the crosses during the holiday season.” The organization that calls itself a “nonprophet nonprofit” asked members to “Tell San Jacinto commissioners to remove courthouse crosses.”

As reported, 600-700 residents filled the Coldspring Community Shelter when the commissioners voted on the issue. Over 45 residents signed up to address the county officials at the meeting which felt like a revival, one speaker said.

Residents of the county of just under 29,000 people celebrated on social media after it saw photos of the illuminated Christian symbol on the courthouse.

Dwayne Wright took the featured photo and posted it with the statement: “This is how we roll in San Jacinto County!

Not only did we not cower to the Wisconsin Whiners, we Lit Them Up !”

“Congress shall make no law respecting an establishment of religion, or prohibiting the free exercise thereof.” First amendment

First off, the Constitution says freedom OF religion, and guarantees the FREE EXERCISE of it. The FFRF tries to prohibit that free exercise through intimidation: lawsuits and threats. They constantly initiate actions against institutions, groups, and people that feel to express what THEY choose regarding their faith, or even how they support other groups such as veterans. And they use the Constitution to back their egregious actions.

Congress is not ‘respecting any religion’ when a cross is erected for veterans by a veterans group. They are not establishing religion when a city council or county commissioners put up crosses as memorials to the sacrifices of troops. Congress is not establishing a religious sect when Christmas decorations are attacked by the FFRF. These are not the actions of Congress, these are the actions of ordinary people attempting to freely exercise their faith. Texas has sometimes told the FFRF to go to h*** and we hope that more states and groups will do so.

Isn’t it interesting that the FFRF does not attack Muslims for their indoctrination of school children or prayer rugs in a school room set aside for “prayer”? They are solely focused on Christianity.

The FFRF has run roughshod over the First Amendment. Unless we stand up to them, they will continue their march toward oppression against Christians.

Some FFRF members even claim to be Christians. (Not even close to believable.) The so-called “establishment clause” was never intended to destroy religious faith, it was intended to support it. Our forefathers came here for the freedom to express themselves, not have tyrannical groups rule their lives.