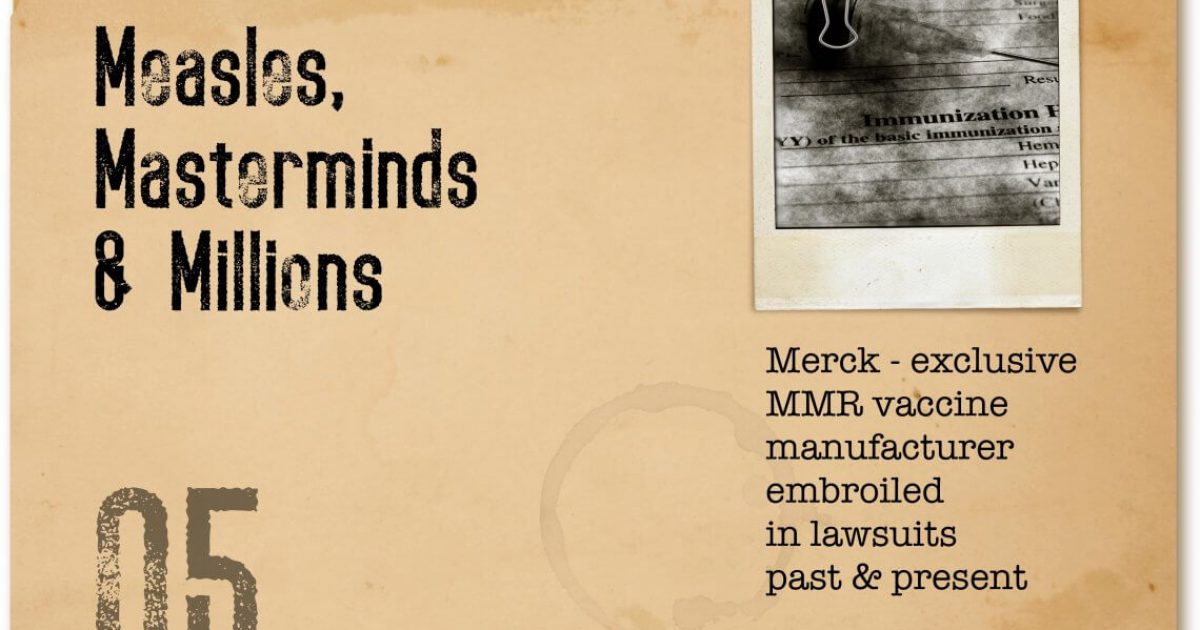 Merck, the exclusive manufacturer of the MMR vaccine for measles, mumps, and rubella, has been involved in a lawsuit since 2010 against its own scientists who blew the whistle on the efficacy of their MMR vaccine, but that’s not the only lawsuit they’ve been up against. In fact, Merck has been fined billions for multiple crimes over the years. Measles, Masterminds & Millions has broken down the inception of the free Vaccines for Children program by the Clintons, the deception by the media, the money flow, and the compensation program in Parts 1–4. Part 5 exposes some of the crimes and lawsuits Merck has had to answer for.

• Merck withheld safety information on products, exaggerated efficacy rates more than once, withheld information, and has been fined several times for Medicaid fraud and bribing healthcare professionals
• VCIP awarded $5,877,710 to 49 victims for injury and death claims from Merck’s Gardasil HPV Vaccine
• Merck allegedly used rabbit antibody to alter the efficacy rate of the MMR vaccine to 95% to keep its license and control the market

Part I: The Clintons Masterminded The Mandatory Free “Vaccines for Children” (VFC) Program in 1994
Part II: Big Discrepancies & Misrepresentations in Reporting on The Measles “Outbreak”
Part III: The Vaccine Compensation Program Has Doled Out $4.1 Billion and Obama Added More Vaccines to Government Protected List in Dec. 2016
Part IV: The Clintons, Big Pharma, and Government Taking it to The Bank

Lawsuits Against Merck, Including A Suit From Their Own Scientists on The MMR Vaccine

In August 2010, former Merck virologists blew the whistle by filing a qui tam action lawsuit (U.S. V Merck & Co.), alleging that the efficacy tests for the measles, mumps, rubella vaccine (MMR) were faked.  The suit, filed by Stephen A. Krahling and Joan A. Wlochowski, charges that Merck knew its MMR vaccine was less effective than the purported 95% level. It also alleges that senior management was aware of this and oversaw testing that concealed the actual effectiveness. Both virologists said they were threatened with jail if they were to alert the FDA that fraud had been committed.

In order to ensure the higher efficacy rate, it is alleged that they used rabbit antibody. This made the blood go from 10% positive to 80% positive, making it overtly obvious that foul play took place. In order to achieve the 95% rate without putting up red flags, they allegedly manipulated the pre-vaccine tests, by fabricating the plaque counts on the blood samples, and counting plaques that were not there. This ultimately allowed a mathematical dilution of the pre-vaccine positive blood counts.

They go on to state that “the same viral mumps strain has been in use in every mumps or MMR vaccine Merck has made since 1967” making it a very diluted version. Merck had to convince the FDA of the 95% efficacy rate in order to continue the FDA license.

In July 2012, two class action lawsuits were filed against Merck for violating the Sherman Act and various violations of state laws. Both suits are being handled together. (U.S. v Merck and U.S. v Merck and Chatom v Merck). They argue that “Merck has known for a decade that its mumps vaccine is far less effective than it tells the government, and it falsified test results and sold millions of doses of questionable efficacy, flooding and monopolizing the market.” Merck is the only manufacturer licensed by the FDA to sell the mumps vaccine in the United States.

Several other physicians filed a class action lawsuit alleging that the vaccine was mislabeled and was not the product for which the government or other purchasers paid, violating the false claims act.

Despite the fact that taxpayers pay for the vaccines our government is purchasing, they declined to intervene or join the whistleblower lawsuit. A real shocker.

When reviewing the statistics the CDC has published for the current “measles outbreak,” as of April 26, 2019, there were 704 cases reported. Of those, 77 people had already been vaccinated but still contracted the measles. Obviously, a lot of other factors would be involved in determining solid efficacy rates, but if this were used as a sample case study, it would indicate an 89% efficacy rate amongst the 704 individuals who tested positive for measles.

Merck is No Stranger To Lawsuits

The National Vaccine Injury Compensation Program (VCIP) awarded $5,877,710 to 49 victims over claims against the Gardasil HPV vaccine. Part 3 of this report goes in depth about the compensation program and explains how taxpayers pay for vaccine injury or death claims. Over 200 claims have been filed with 26 deaths reported as of 2011, in addition to seizures, paralysis, blindness, pancreatitis, speech problems, short term memory loss and Guillain-Barré Syndrome. Despite this, the CDC’s reaction was “there was no unusual pattern or clustering to the deaths that would suggest that they were caused by the vaccine.” Of course not. That’s why they settled for nearly $6 million dollars.

According to a report by the Washington Times, they claim that the product insert states “Gardasil….not been evaluated for carcinogenicity or impairment of fertility.”

Till this day, the CDC continues to promote the HPV vaccine, assuring everyone that it is safe. In fact, some states are currently pushing for legislation to add the HPV vaccine to the mandatory children’s vaccine schedule.

For further information on the Gardasil cases and the vaccine itself, Judicial Watch launched a probe back in 2007, and eventually received documentation. They have covered it quite extensively. This is very important information worth reading, especially if you are a parent considering vaccinating your child with the HPV vaccine:

In 1969 the FDA ordered Merck to tone down their claims regarding the efficacy of the antibiotic novobiocin, as well as add a warning label about the serious side effects.

In the mid-1970s, Merck was one of over two dozen manufacturers sued by large numbers of women that had suffered from vaginal cancer as well as other medical problems, because their mothers had used the drug diethylstilbestrol (DES). The drug had been widely prescribed to pregnant women, despite evidence that DES caused cancer in animals.

In 2001 it was reported that Merck’s arthritis drug Vioxx may not be safe, and users were found to have elevated risks of heart attack or stroke. In 2004, Merck withdrew Vioxx from the market. The Wall Street Journal had obtained internal emails and documents, reporting that “Merck’s management appeared to have known about the risks of Vioxx for years and maneuvered to keep the information from derailing its blockbuster product.” This sounds eerily familiar to the MMR lawsuit that was filed in 2010. Eventually, the Justice Departments and the Securities and Exchange Commission began to investigate, following thousands of lawsuits being filed. CEO Raymond Gilmartin resigned, and the first lawsuit was settled in 2005, in a one-hour deliberation that awarded the plaintiff $253 million in damages. By 2007, Merck agreed to pay $4.85 billion to settle 27,000 lawsuits. After the U.S. Department of Justice wrapped up its investigation in 2011, it ordered Merck to pay $950 million to resolve civil claims and criminal charges. Merck pleaded guilty to violating federal drug law and making false statements about the drug’s cardiovascular safety.

In 2007 Merck and Schering-Plough never published results of their studies on their cholesterol drug Zetia, resulting in a $41 million in class-action lawsuits charging that the companies once again withheld unfavorable results of a clinical trial of their drugs Vytorin and Zetia. This seems to be a pattern.

In 2008 Merck paid the federal government more than $650 million for Medicaid fraud, overbilled other government programs, and made illegal payments to healthcare professionals so as to get them to prescribe their product.

This is just a sampling. Merck has paid fines for false claims, Medicaid fraud, anti-competitive practices, taxes, bribery, labor, and environmental fines. It’s amazing this company still exists. Now, remember, do not dare question the validity of that MMR vaccine, or any other vaccines for that matter. And do not dare question if you are being told the truth about how safe these vaccines really are.

Is it any wonder why people are concerned and want further investigations into the vaccine industry? Merck produces more vaccines for children than any other company, and their reputation is that of an ex-con. The top ten vaccine manufacturers need far more oversight, and people deserve far more transparency and safety measures put in place for their children.

To date, the government has paid out $4.1 billion in taxpayer dollars over vaccine injury and death claims, since 1988. Yet, they continue to add more vaccines to the mandatory “vaccine schedule” for children, do not appear to be adjusting safety measures, and purport that vaccines are “safe.” Anyone who speaks out about wanting further investigation into vaccines is declared a “disinformation anti-vaxxer.” Meanwhile, the vaccine industry is moving full steam ahead with expected growth to hit $60 billion by 2020.

Previous articles in this series include: