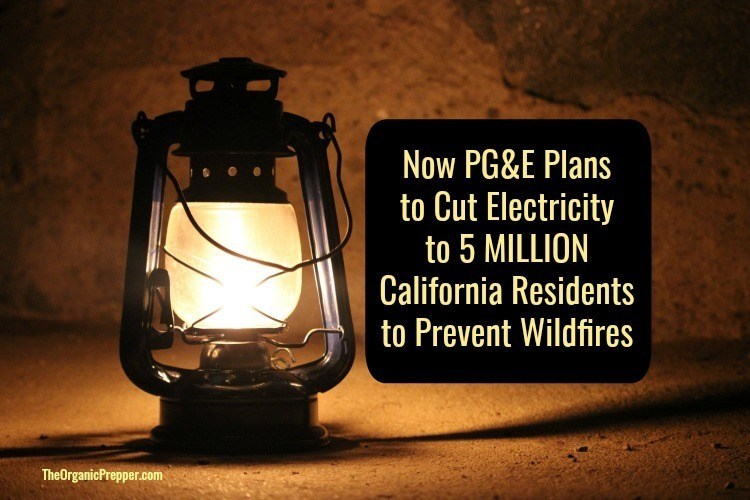 If you or any of your loved ones live in California, be prepared for power outages during the upcoming fire season. The state’s three largest energy companies have announced they will be turning off power during extreme weather or wildfire conditions.

Earlier this month, the energy companies announced their coordinated wildfire safety and awareness campaign, which was created to prepare state residents for the upcoming power outages. PG&E began the shut-off program last year but it only applied to around 570,000 customers. Now, 5.4 million will be impacted.

The statewide Power of Being Prepared campaign is being led jointly by San Diego Gas & Electric (SDG&E), Southern California Edison (SCE) and Pacific Gas and Electric Company (PG&E), at the direction of the California Public Utilities Commission (CPUC).

Californians are being warned to prepare for power shutoffs due to wildfire risks.

According to a press release, the campaign’s purpose is a “call to action for all Californians to take important steps to get ready before the 2019 wildfire season, such as creating a thorough emergency plan and updating their contact information with their energy company.”

The change stems from PG&E’s expansion of its shut-off program scope to include higher-voltage transmission lines like the one suspected of involvement in the start of last year’s Camp Fire, the deadliest and most destructive wildfire in California’s recorded history. In February 2019, PG&E filed for bankruptcy protection, citing potentially $30 billion in liabilities after two seasons of historic wildfires. The company admitted a power line failure was the probable cause of the Camp Fire that killed 86 people and destroyed thousands of homes. In a filing with federal regulators, PG&E expressed doubt about its ability to remain in business.

People who rely on electricity for medical reasons are especially vulnerable.

While the plan’s goal is to mitigate risks associated with wildfire conditions, many are concerned about the impact it will have on California’s most vulnerable residents. There are nearly 180,000 medical baseline customers with special needs that require electricity (in some cases, to keep themselves alive) who may see their power turned off for several days.

On its Public Safety Power Shutoff site, the three power companies have a warning for those who rely on electricity for a medical device:

If you rely on electric or battery-dependent medical technologies such as breathing machines, a power wheelchair or scooter, and home oxygen or dialysis, it is critical that you have a plan in place for an extended power outage.

Governor Newsom recently announced $415 million in funding for emergency preparedness and response, $75 million of which will be allocated to helping communities supplement their power sources with home battery systems.

“I’m worried,” Newsom said during the budget briefing earlier this month, Bloomberg reports. “We’re all worried about it for the elderly. We’re worried about it because we could see people’s power shut off not for a day or two but potentially a week.”

Blackouts could last for several days – or longer.

Even for those without special medical needs, power shut-offs can create other problems as Californians seek ways to deal with what some fear could be days and days of blackouts.

Past shut-offs have drawn the ire of residents and local officials, reports the San Francisco Chronicle:

In October, PG&E turned off electricity for thousands of customers in the North Bay and some nearby areas, in its first planned outage to lessen wildfire risk. The incident prompted significant blowback, as residents and local government leaders faulted PG&E for poor communication and failure to adequately mitigate the disruptive impact.

Lake County Sheriff Brian Martin criticized the October shut-off in his region, and he said he retains his concerns going into the next wildfire season. Martin said he wants to keep his community safe from fires but the shut-offs can “create a whole other disaster” for residents.

In one of California’s most fire-prone and poorest counties, many people can’t afford good backup measures, Martin said.

“It’s not like everybody in Lake County can go out and buy a generator,” he said. “If this happens right at the first of the month when people are getting their checks and and filling up their refrigerators, and all of a sudden the power goes out for three, five, seven days, they’re going to be without food … It’s going to create a tremendous impact on us.” (source)

Residents will not get much warning prior to shutoffs.

PG&E’s vice president of electric operations, Aaron Johnson, told Bloomberg that the utility is aiming to give at least two days warning before a shutoff, and is working to identify vulnerable residents.

“It’s a very challenging program and not a decision that we take lightly given the safety risks that exist on either side,’’ PG&E’s Johnson said. It’s also part of a larger utility program designed to reduce the likelihood of wildfires including stepped up tree trimming, inspections, grid repairs and hardening, he added.

The utility aims to give at least two days warning about a shutoff and has embarked on a public awareness campaign including mailing letters to customers and is working to identify vulnerable residents. It also will be working to get power restored in a day after a shutoff, though its customers could be out for as many as five days, according to Johnson. (source)

“The decision and action to turn off power is made by each energy company and is based on a combination of factors. These include high winds (including Red Flag Warnings declared by the National Weather Service), low humidity, dry vegetation and conditions on the ground. Power outages could last multiple days, depending on the severity of weather conditions and other factors, so it is important for everyone to have an emergency plan in place,” the PG&E press release states.

The wildfire season usually starts around June and runs through December, exacerbated by strong winds that race through the state and dry conditions that turn brush and plants into tinder. Some say that California doesn’t really have a fire “season” anymore – wildfires are becoming more frequent and intense and now seem to be the new norm for the state.

Six of the 10 most destructive wildfires in California history occurred in the last 18 months, killing 123 people and often shutting down large sections of the state’s electrical grid.

In its press release, PG&E provided a list of safety tips for residents.

Here are some steps Californians can take to help prepare for extreme weather and Public Safety Power Shutoff events:

Plan for the needs of pets and livestock

Ensure any backup generators are ready to safely operate

Even those who do not live in California should prepare for wildfires.

In the article 90% of Wildfires Are Caused by People, Not by “Climate Change” – Here’s Why (and How) You Must Prep Your Home for the Inevitable, Daisy Luther explains that most fires in the US are caused by the carelessness or deliberate intent of human beings.

The US Department of the Interior says:

Wildfires can be caused by nature — mostly due to lightning strikes — but the vast majority are caused by humans. Research estimates that 90 percent of wildland fires in the United States are caused by people. Some human-caused fires result from campfires left unattended, the burning of debris, and intentional acts of arson. It can also be caused unintentionally by heat and sparks from vehicles and equipment. Public education and personal responsibility can greatly reduce the number of wildfires each year. (source)

And a third of our growing population lives in areas that are much more prone to burn.

As our population grows, more and more people – one-third of homes, specifically –  live in or near the forests and natural areas, something called Wildland-Urban Interface. According to a report by the USDA, if you are in that interface, sooner or later, you’re going to be at risk of a wildfire. “Homes located anywhere in the WUI will eventually be exposed to wildfire, regardless of vegetation type or potential for large fires.” (source)

For tips on how to protect your home from fire, preparing to evacuate, and surviving blackouts, please see the following resources:

Do you think PG&E’s plan to shut off power to help prevent fires is a good idea? Are you adequately prepared for wildfires? Please share your thoughts in the comments.