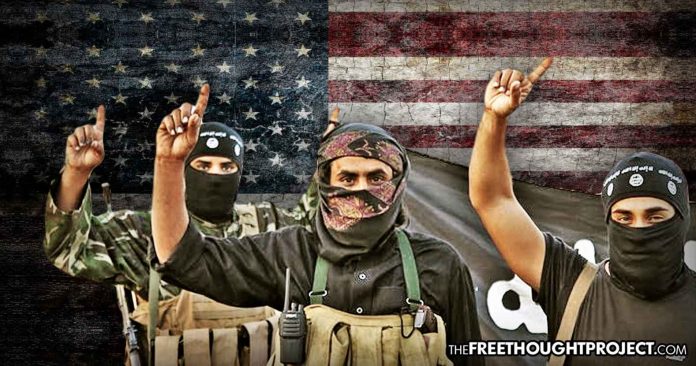 For the last several decades, the US government has openly funded, supported, and armed various terrorist networks throughout the world to forward an agenda of destabilization and proxy war. It is not a secret, nor a conspiracy theory—America arms bad guys. The situation has gotten so overtly corrupt that the government just admitted the Pentagon asked Congress for funding to reimburse terrorists for their transportation and other expenses. Seriously.

“The Defense Department requested fiscal 2020 funding to support certain reconciliation activities, including logistic support for members of the Taliban and, in March 2019, they sent a notification letter to the Committee on using fiscal year 2019 funds for similar activities,” a spokesman for House Appropriations subcommittee on Defense Chairman Peter J. Visclosky (D-Ind.) told Roll Call.

According to the Hill, the money would pay for the terrorist organization’s transportation, lodging, food and supplies, the spokesman said. He also said the Defense Department’s request “would implicate provisions of law concerning material support to terrorists, the Taliban’s ongoing offensive operations against U.S. service members, and their continuing lack of acknowledgement of the government of Afghanistan or the rights of women in Afghan society.”

The line between the ostensible “good guys” and the “bad guys” has gotten so blurred that the good guys are now openly supporting the bad. It’s a story straight out of The Onion, but in real life.

Steve Ellis, executive vice president of Taxpayers for Common Sense, agrees and told Roll Call that the funding request for terrorists is like “life imitating the Onion.”

“Even if you leave aside that they are still conducting operations against our interests and allies, having to pay for someone to be at the table undercuts our bargaining position and demonstrates their lack of enthusiasm for a deal,” Ellis said. “I’m sure the Taliban would like whatever cash we’re willing to give them, but it’s not like they aren’t able to continue funding their fighting. How about using some of that cash instead of American taxpayer dollars.”

Fortunately, because these warmongers were so overt about their request for money to give to terrorists, the new spending bill prohibits reimbursing Taliban expenses.

“None of the funds made available by this Act may be used to pay the expenses of any member of the Taliban to participate in any meeting that does not include the participation of members of the Government of Afghanistan or that restricts the participation of women,” the legislation said.

While the idea of the US government paying to support terrorist may seem like a crazed idea it has become so overt in recent years that legislation was specifically introduced for the sole purpose of banning the the flow of money to terrorist organizations.

However, given the insidious history of the American empire and its creation and fostering of terrorist regimes across the globe, it should come as no surprise that the overwhelming majority of politicians would refuse to sign on to a law that requires them to ‘Stop Arming Terrorists.’ And, in 2017, that is exactly what happened.

The text of the bill was quite simple and contained no hidden agendas. It merely stated that it prohibits the use of federal agency funds to provide covered assistance to: (1) Al Qaeda, Jabhat Fateh al-Sham, the Islamic State of Iraq and the Levant (ISIL), or any individual or group that is affiliated with, associated with, cooperating with, or adherents to such groups; or (2) the government of any country that the Office of the Director of National Intelligence (ODNI) determines has, within the most recent 12 months, provided covered assistance to such a group or individual.

The only thing the bill did was prohibit the US government from giving money and weapons to people who want to murder Americans and who do murder innocent men, women, and children across the globe. It is quite possibly the simplest and most rational bill ever proposed by Congress. Given its rational and humanitarian nature, one would think that representatives would have been lining up to show their support. However, one would be wrong and in the five months after it was proposed, just 13 members of Congress signed on as co-sponsors.

Terrorism is necessary for the state. War, is the health of the state.

Without the constant fear mongering about an enemy who ‘hates our freedom’, Americans begin questioning things. They challenge the status quo and inevitably desire more freedom. However, when they are told that boogeymen want to kill them, they become immediately complacent and blinded by their fear.

While these boogeymen were once mostly mythical, since 9/11, they have been funded and supported by the US to the point that they now pose a very real threat to innocent people everywhere. As the recent attacks in Sri Lanka illustrate, terrorists are organizing and spreading.

Terrorists groups have been exposed inside the UK as well for having ties to the British government who allowed them to freely travel and train with ISIS-linked groups because those groups were in opposition to Muammar Gaddafi, who the West wanted to snub out.

It’s a vicious cycle of creating terrorists, killing innocence, and stoking war. And, unless something radical happens, it shows no signs of ever reversing.

The radical change that is necessary to shift this paradigm back to peace is for people to wake up to the reality that no matter which puppet is in the White House, the status quo remains unchanged.

Trump is proving that he can lie to get into power and his supporters ignore it. If you doubt this fact, look at what Trump did by calling out Saudi Arabia for their role in 9/11 and their support for terror worldwide prior to getting elected. He now supports these terrorists and his constituency couldn’t care less.

This madness has to stop. Humanity has to stop being fooled by rhetoric read from teleprompters by puppets doing the bidding of their masters.

Please share this article with your friends and family to show them how their supposed ‘leaders’ — except for a few good ones — are content with funding the enemy, laying waste to rights, and condone the murder of innocence.