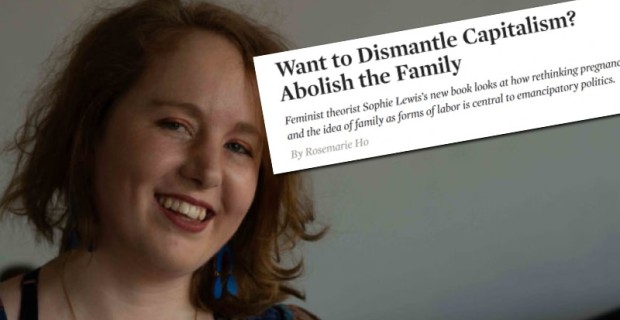 Feminist Sophie Lewis has written a new book in which she argues that in order to ‘dismantle capitalism’ it’s necessary to ‘abolish the family’.

Lewis was interview by left-wing website the Nation under the headline Want to Dismantle Capitalism? Abolish the Family.

According to the piece, patriarchy and capitalism combined to produce alienated workers who became “instruments of production” for the men who lorded over them.”

This led to the “heteronormativity of familial relations” and must be combated by a “radical reconceptualization of pregnancy itself”.

If by this point, you’re wondering what the hell any of this is about, don’t worry, you’re not alone.

Quite how the family unit is to be ‘abolished’ isn’t explained.

Lewis argues that pregnant women are subject to “biological and societal violence” and that “the ostensibly feminist objection to surrogacy arrangements underwrites the ossified and alienated familial relations that make capitalism possible.”

Capitalism and the family unit are two of the bedrocks of western society. As a fringe leftist, it’s unsurprising that Lewis wants to totally obliterate both.

The rest of the article is a blathering mess of clichéd ‘woke’ progressive nonsense and I won’t bore you with its contents.