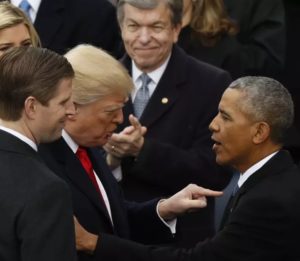 Like him or not, everyone should be impressed with Donald  Trump’s success as President of the United States and how much he has helped America and its citizens.  Thinking about the  amount of  Trumps success and his lack of experience as a politician, the first thing that comes to mind is ,  “what was Obama doing, besides creating problems, while he was in the  White House”.  He reminds me a lot like that guy that sleeps on the couch. He  doesn’t work and is in the way. Lies about what his plans are or what he was doing that day.  Up in your personal business and causes problems in your relationship/household.  Does not know when to go away.  Acts like he is your friend while he steals from you.  In the end you are going to be out of some cash.

It looks as if every duty a president has to do, Trump does better than the rest.  This is not entirely true.  I did find one thing Trump will never be able to do as well as Obama.  Obama was better at giving tax payer money to other countries.

Most Americans are not aware of how much money our country gives to other countries as Foreign Aid.  Some think it’s 25 % of the yearly budget.  I would say it’s more around 1%.  I base that on the data that is available.  I wouldn’t bet my life on it but I think I’m pretty close.  I thought I would take a look at how much Foreign Aid Obama gave his first year budget and compare it to Trump’s first year budget. Since the budget is already made by the preceding president we will be using Obama’s 2010 and Trump’s 2018 to compare. The data will come from USAID.

USAID has been responsible for reporting U.S. foreign aid as defined under Section 634 of the Foreign Assistance Act of 1961, as amended. In the summer of 2003, USAID built a data repository to track all foreign assistance activities funded by the U.S. Government and fulfill two international aid reporting requirements of the U.S. Government: (1) Publication of the annual U.S. Overseas Loans and Grants (informally known as the Greenbook) for Congress and (2) the U.S. Government’s Annual Assistance Report (USAAR) to the Development Assistance Committee (DAC) of the Organization for Economic Cooperation and Development (OECD). This data repository evolved into the USAID Foreign Aid Explorer (FAE), a resource for information on all U.S. foreign assistance funding and implementation, from over 70 U.S. Government departments, agencies, sub-agencies, and offices. In addition to fulfilling the two U.S. Government reporting requirements, the FAE helps USAID respond to stakeholder and public inquiries regarding U.S. foreign aid, the Foreign Aid Explorer website and ForeignAssistance.gov.

Here is a list of the reporting Agencies.  This will give us the total all Foreign aid the USA provided  for each year.

Below are Obama’s remaining yearly foreign aid  budgets.  2016 is incomplete because eleven of the 22 departments did not submit their reports.

While we are here, let’s take a look at how much Obama and Trump gave Russia in their first year budgets. Obama at around 506 million and Trump at around 154 million.

Below is Obama’s remaining yearly foreign aid given to Russia.

Tell me again, Who colluded with the Russians?  I’m not surprised that this information does not get any exposure.  with the left it’s anything but reality.

In the images you will see “obligations”.  The actual disbursements might be a little higher or lower.  They are close enough so it really doesn’t make a difference which one I used.  You will also see the word “activity”.  This is exactly what the aid was used for. Below is a screenshot of Obama’s 2010 foreign aid total.  You will notice where it says “activity” are the 10  largest aid recipients.  At the end of this article I have provided a link to where you download all foreign aid activity from 1946 to the most recent year..  Or if you want click on the second link I provided to view online.

Something I find interesting is that USAID(website where I got this information) was audited.  They seem to lost 450 million dollars.  USAID reports to congress.   Why has congress not made a big deal out of this?