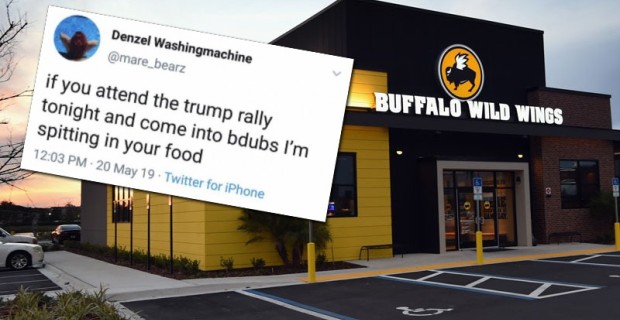 An employee of Buffalo Wild Wings in Pennsylvania threatened to contaminate Trump supporters’ food before a rally on Monday night.

“If you attend the Trump rally tonight and come into bdubs I’m spitting in your food,” tweeted a user called ‘Denzel Washingmachine’.

Thousands of Trump supporters attended the event at Williamsport Regional Airport in Montoursville.

Despite the woman who made the threat locking her Twitter account, screenshots of the tweet were sent to Buffalo Wild Wings headquarters and the FBI by Michael Conroy and others.

“Just spoke w/ the Williamsport, PA BWW’s location,” he posted to Twitter. “They confirm they are the closest to Montoursville. They r aware of the issue, seemed to confirm it WAS one of their employees who posted that tweet, apologized PROFUSELY, & said that they r ‘addressing issue as we speak.’”

In another twist, the person who first drew attention to the threat,a Twitter user called @ARTalon1, had their account suspended. Whether the suspension is related to this story remains unknown.