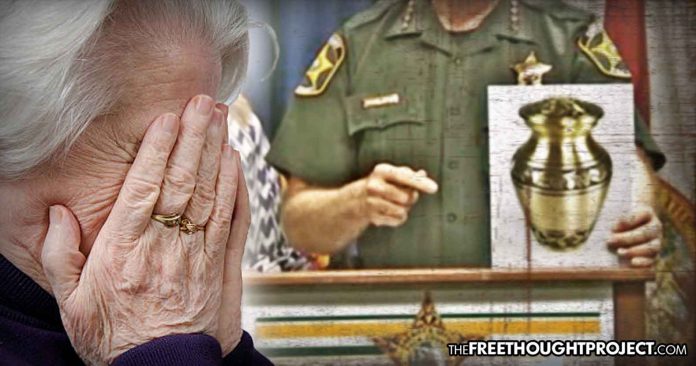 Brooklyn, NY — A family is speaking out against the NYPD after they were raided by multiple cops, had their house destroyed, and false charges brought against them for vials of ashes containing their late patriarch.

The incident happened last year as Lucia Santiago, 65, was awakened in her bed by heavily armed NYPD officers and forced into the living room.

COPS CUFFED THE GRANDMOTHER, HER SON AND A GRANDSON AS THEY SEARCHED THE STARR STREET HOME, DEMANDING TO KNOW WHERE “THE GUNS AND DRUGS” WERE HIDDEN, THE SANTIAGOS CLAIM IN A LAWSUIT.

BUT ALL THE COPS FOUND WERE “PERSONAL MEMORIAL URNS” CONTAINING THE CREMATED REMAINS OF LUCIA’S HUSBAND, MIGUEL, WHO DIED OF NATURAL CAUSES IN 2016 AT AGE 72, THE FAMILY SAYS.

THE OFFICERS BELIEVED THE ASHES, SEALED IN AN AIRTIGHT CAPSULE INSIDE BULLET-SIZED VIALS, WAS HEROIN, AND TOOK THE URNS AS EVIDENCE, ACCORDING TO THE BROOKLYN FEDERAL-COURT LAWSUIT AGAINST THE CITY.

“I said, ‘That’s the ashes of my husband,’ ” Santiago claimed she told one cop.

After the grandfather,  Miguel Santiago had passed away, the family divided his ashes among themselves at his behest.

“He wanted for his grandkids to have a piece of him, and his children, me and my mother, nephew and son,” Nelson Santiago said of his dad, who once owned a pizzeria in Brooklyn, according to the Post.

Police claim they conducted the raid over an alleged gun sale. However, no such gun or evidence of a gun sale was found. But police didn’t want to go away empty handed so the grandmother and her two grandsons were charged with possession of a controlled substance — for the ashes — and possession of ammunition for some loose bullets.

The family told the NY Post that the “ammunition” possession charge was from a few old bullets Miguel had laying around the house. Proving them right, all the charges were later dismissed. Sadly, however, the cops have kept their grandpa’s ashes.

Nelson Santiago, Lucia’s son, said the family was told that “evidence they don’t use is discarded. We don’t know where my dad is at. We’re going on a year.”

Lucia Santiago said the raid and subsequent treatment of her late husband’s remains has caused her “unbearable pain.”

Sadly, this is the norm, not the execption. While Lucia Santiago and her family wait to have Miguel’s ashes back from police, this is not the first time officers have mistaken cremated remains for illegal drugs.

As The Free Thought Project reported last year, a heartbroken father who carried a vial of his dead daughter’s ashes with him everywhere he went, lost the majority of the substance when he was stopped for not having a front license plate, and the officer thought the vial contained drugs.

Anthony Butler told the Chicago Tribune that he does not remember specifically giving consent for a field drug test on the ashes, but he made it clear to the officer that the vial contained the ashes of his dead daughter, and he begged the officer not to dump them out.

While conducting the search, the officer put Butler in handcuffs and forced him to wait in the back of the patrol car. When a test confirmed that the white powdery substance was not narcotics, he let Butler go.

When Butler returned to his car, he found the vial on the console between his front seats and the inner cap was missing from it. The outer cap was not secure, and as soon as he picked it up, the remains of his daughter’s ashes spilled out all over his car.

“When I picked up the remains, the bottom half just fell to the bottom of the console,” Butler said. “Just the worst feeling in the world came over me, like, this isn’t happening.”