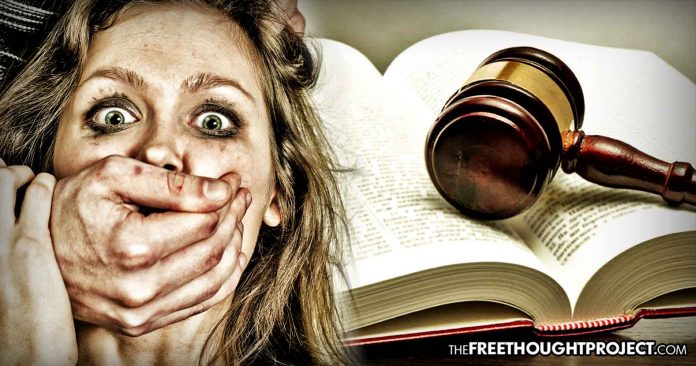 North Carolina — already not considered a democracy and characterized as more a dictatorial entity on par with Cuba and Indonesia — managed, with a fateful decision by the state Supreme Court in 1977, to pass a law allowing the legal rape of women who revoke consent to sex once the act has been initiated. Despite garnering national coverage for such a horrifying law over the past few years, the law on the books still stands. Furthermore a bill that would’ve made such an act illegal, died in a Senate committee this month.

As the News Observer reports, “North Carolina may remain the only state in the country where someone cannot be charged with rape for continuing to have sex with a partner who told them to stop. It stems from a 40-year-old legal precedent.”

“It doesn’t look like it’s going to move,” said Dylan Arant, State Sen. Jeff Jackson’s legislative assistant. “Sen. Jackson has not been given a clear reason why. We’re still going to try and find a way to get it done.”

Earlier this year, a team of 11 media partners including Carolina Public Press and The Fayetteville Observer extensively examined the state law in North Carolina and theirfindings are worrisome, to say the least.

If actual sexual penetration occurs under the banner of consensuality, that agreement to have sex cannot — according to North Carolina law for decades — be suddenly revoked, even if a man turns violent.

“If the actual penetration is accomplished with the woman’s consent, the accused is not guilty of rape, although he may be guilty of another crime because of his subsequent actions,” the North Carolina Supreme Court wrote in its decades-old decision in State v. Way.

“It’s really stupid,” stated then-19-year-old Aaliyah Palmer — who allegedly agreed to sex — but revoked consent when the man she’d met at a party turned violent — to the Fayetteville Observer. “If I tell you no and you kept going, that’s rape.”

Palmer understandably surmised her brutal encounter amounted to rape — as it did — but discovered to her astonishment state law disagreed.

As TFTP reported at the time, a bill proposed in 2017, sought to jolt the fraught Southern state into the 21st Century — making legal rape illegal again.

“Legislators are hearing more and more about women who have been raped and are being denied justice because of this crazy loophole,” asserted Senator Jackson, who introduced the bill on March 30.

This latest failure of the bill happens to be the fifth time the state has failed to outlaw rape.

“This really shouldn’t be a controversial matter,” Jackson said. “North Carolina is the only state in the country where no doesn’t really mean no. Right now, if a woman tells a man to stop having sex he is under no legal obligation to do so, as long as she initially consented. If sex turns violent, the woman has no right to tell the man he must stop.”

Let that last part sink in for a moment: A man in North Carolina can forcibly complete a sex act with a woman — even if he employs violence to get his way.

That’s rape by nearly any definition — except in the eyes of the repressive state.

“Very few legislators are aware that this is the current state of our law,” lamented Jackson. “They’re very surprised when I tell them. Most of my conversations have been educating our members about this plainly unacceptable loophole in our rape law. I have not had any members defend the loophole. Every legislator I’ve spoken to agrees we need to fix this.”

Despite what should be unfettered support for a bill rescinding a man’s apparent ‘right’ to rape women, the state senator has received surprisingly resolute pushback by those who view Jackson’s proposed legislation as interfering with natural intercourse.

For 38 years this law has been permitted to languish on the books — depriving an untold number of rape victims from justice, human rights, and basic common decency.

“Aside from perpetrators not being held accountable, when women cannot revoke consent, then we are telling them violence can be perpetrated against them if they consented to begin with and then had a change of heart,” Angelica Wind, an advocate and executive director of Our Voice — a North Carolina-based crisis intervention and prevention agency for victims of sexual violence — said, adding, “allowing women to revoke consent would be transformative for the state of North Carolina.”

Despite this measure failing, lawmakers remain optimistic that the tide is changing and they will one day be able to ban rape.

As the News Observer reports, when asked how he would feel if the state Senate added a provision to HB393 to outlaw continued sexual activity after a partner withdraws consent,  Rep. Chaz Beasley said, “Any positive changes to our laws are welcome.”

“We are starting to see the tide change, and people are much more willing to make our sexual assault laws better,” Beasley said.