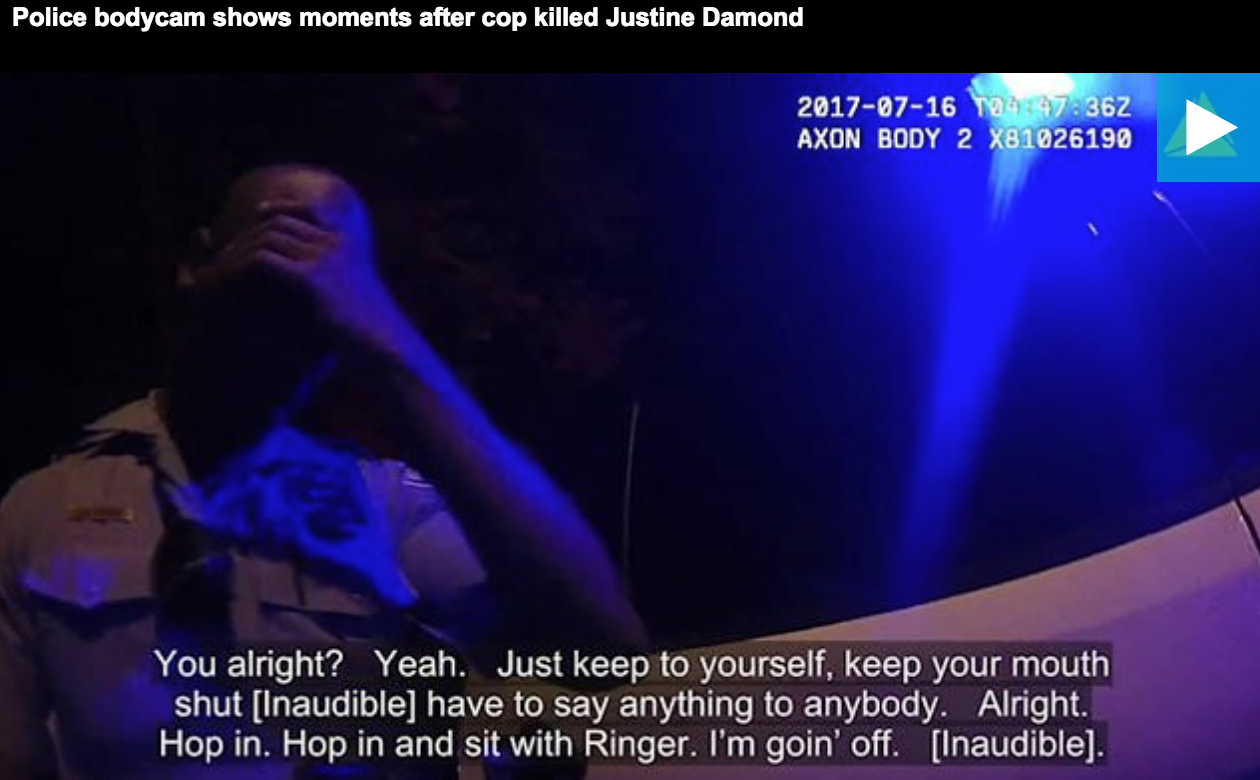 Editor: Mohamed Noor was convicted of 3rd degree murder for the fatal shooting of Justine Damond. He was a diversity hire who may not have been as qualified as others who could have filled his job. Noor was not just the first Muslim hire in the department, he was the first cop convicted of an on the job murder in Minneapolis history.

Pretty damning, I’d say. It hardly fosters confidence in the police. Corrupt. Complicit. Criminal. Minneapolis police department his deeply compromised. Mohamed Noor shot and killed pajama clad, unarmed Justine Damon after she called in an alleged rape taking place behind her home. He was found guilty of murder and is now seeking to overturn that conviction. Newly released bodycam footage shows what happened after she was shot. For some odd reason, Mohamed Noor’s bodycam wasn’t on.

The reality is that Noor should never have been a police officer, and only was because he was Muslim. On the force since 2015, he had three complaints against him. He was described by neighbors as “jumpy,” “ill-tempered,” “strict” and “disrespectful of women and blacks.”

Ms Damond Ruszczyk called 911 to report a possible sexual assault in the alley behind her home just minutes before she was shot in July 2017.

Hijab-wearing Mayor Betsy Hodges instituted hiring policies in the police department to prioritize the hiring of Somali Muslims. This at a time when more than 22 young men from the community had left the state to join al-Shabab in Somalia, and roughly a dozen people have left in recent years to join the jihad in Syria, including the Islamic State group. The area in Minneapolis where Muslim killer-cop was recruited and fast-tracked for police work is a notorious hot spot for jihad recruitment.

Justice for Justine has been been a long, protracted road. Minneapolis Somali-Muslim cop Mohamed Noor shot unarmed, pajama-clad Justine Damond to death at point blank range.Damond had called 911 to report a sexual assault behind her home when she heard the woman screaming for help. Mohamed Noor “shot to kill” her when she approached his squad car just minutes after she called 911. Noor refused to talk to investigators when he was offered a chance to do a voluntary interview, and prosecutors wanted to use that as evidence.

“The circumstances surrounding the crime show that the defendant acted with the intent to kill,” prosecutors wrote in a motion to add second-degree murder.

Noor was found guilty of with murder and manslaughter.

Bodycam footage has captured the moment a cop was told to ‘keep his mouth shut’ after gunning down an unarmed Australian woman in Minneapolis.

Justine Ruszczyk Damond was fatally shot outside the home she shared with her American fiancé, Don, and his son in July 2017, after she called 911 earlier that evening to report a possible rape.

In the alarming clip Mohamed Noor, the officer who shot Ms Damond as she approached the police car, appears sweat-soaked and visibly anxious while a fellow officer is heard telling him to ‘keep his mouth shut’.

The bodycam footage, which was tendered to the court and released on Thursday, sees Noor pace in distress while another cop offers him some advice.

‘You alright? Yeah. Just keep to yourself, keep your mouth shut,’ an unidentified officer tells Noor in the clip.

An inaudible sound is heard before the voice continues.

‘Have to say anything to anybody. Alright,’ they say.

They then tell Noor to ‘hop in’ the vehicle and ‘sit with Ringer’ before stating they were ‘goin’ off’.

Appearing to be overwhelmed, Noor nods and says ‘alright’ before climbing into the squad car to sit with another officer.

In another clip, Harrity tells officers he had his gun drawn, but did not fire, whereas Noor did.

Ms Damond, a dual US-Australian citizen was to due be married to her fiancé, Don (pictured) a month after her life was cut short when she was fatally shot outside her home in Minneapolis by police officer Mohamed Noor

Ms Damond had called police to her home on July 15, 2017, believing a woman might be getting raped outside her home. She was shot after she approached the squad car, ‘spooking’ the officers inside (pictured is Noor’s partner Matthew Harrity performing CPR on Ms Damond after the shooting as Noor paces nearby)

‘We got spooked,’ he told them.

In the clip taken by the cyclist, officers can be heard urging Ms Damond to ‘stay with me’ as they pump her chest.

A jury found Noor was guilty of third degree murder and second-degree manslaughter after a three-week trial in Minneapolis last month.