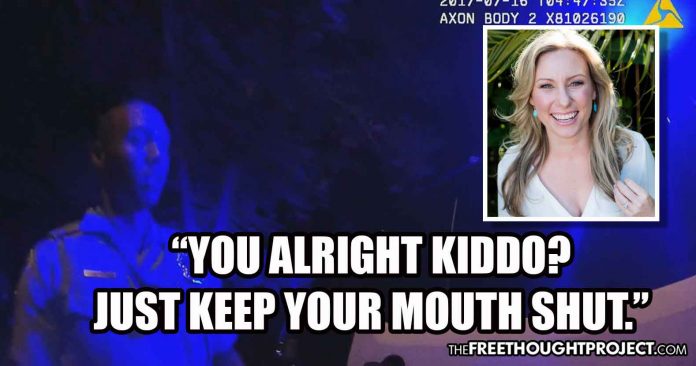 Minneapolis, MN — New details are emerging about the tragic shooting of Justine Damond, an Australian yoga teacher and spiritual healer, by Officer Mohamed Noor. On April 30, Noor was convicted for murder and manslaughter in Damond’s death. And now, evidence from the trial — in the form of body camera footage and 911 recordings — is being released.

On that fateful night, officer Noor was sitting in the passenger seat of his patrol car and opened fire through the driver’s side door hitting Damond at least once in the abdomen. Noor and his partner were responding to her 911 call about a possible sexual assault.

Conveniently, for Noor and his partner, it was revealed at the time that neither of them had activated their body cameras. The dashcam, we were told, was not recording any video footage either.

Now, however, with the release of this new evidence, we see that the entire department has a problem with turning off their body cameras, especially when talking to killer cops who gun down innocent women in their pajamas.

As the Star Tribune reports:

PROSECUTORS RAISED THE SPECTER OF POLICE SECRECY AT TRIAL, NOTING THAT SEVERAL OFFICERS AT THE SCENE ONLY SPOKE TO INVESTIGATORS AFTER THEY WERE SUBPOENAED TO APPEAR BEFORE A GRAND JURY. THEY ALSO SCRUTINIZED BODY CAMERA USE, AND THE VIDEO EVIDENCE SHOWED REPEATED CONCERN AT THE SCENE FOR NOOR AND HIS RIGHT TO NOT SPEAK ABOUT THE SHOOTING,EVEN WHILE EFFORTS CONTINUED TO SAVE DAMOND.

“It sounds like sex noises, but it’s been going on for a while and I think I just heard, ‘Help.’ And it sounds distressed,” Damond told the dispatcher on the original 911 call. She then called back a few minutes later to see where the officers were. Five more minutes would pass before Damond’s 911 call would be her death sentence.

When Damond walked out to talk to the officers, Noor shot and killed her.

Since 2016, Minneapolis has required all officers to wear and activate body cameras “at all times when they could reasonably anticipate that they may become involved in a situation for which activation is appropriate,” as noted by HuffPo.

But these officers conveniently managed to turn off both of their body cameras and the dashcam before entering the alleyway in response to Damond’s call about an alleged sexual assault taking place behind her home.

What’s more, nearly every officer on the scene whose body cameras were actually working, either turned it off or were caught helping Noor, advising him to stay quite.

Imagine for a moment that a regular civilian had just shot and killed an innocent woman, would they receive this same treatment as witnessed below?

When officers arrived at the scene they were responding to a “shots fired” call, so they began looking for a suspect. However, once they realized there was no suspect and the cop shot an innocent woman in her pajamas, they immediately began coaching Noor and turning off their body cameras.

When Officer Jesse Lopez arrives on the scene, he tells a visibly distraught Noor, “You all right, kiddo? Just keep to yourself. Keep your mouth shut until you have to say anything to anybody.” He then puts him in a vehicle and drives him away from the scene.

In one video, officer Joseph Grout is heard telling someone his body camera is recording: “I’m hot right now. I don’t know if we’re s’posed to be or not.”

Then, even more disturbing is the fact that when Noor’s supervisor, Sgt. Shannon Barnette showed up and Justine Damond was dying in the street, Barnette called Damond’s phone.

“Hey Justine, this is Sgt. Barnette, Minneapolis police,” she said. “Say I know you called in the unknown trouble call of a woman screaming and I have a question for you, it’s pretty important.”

Prosecutors also brought up damning evidence against Barnette at the trial. According to KARE 11, Barnette admitted in testimony that she did not mean to record the below video. Her body camera captured it, without sound, because the cameras include a 30-second cache prior to pushing the button.

Prosecutors say Noor is demonstrating to Barnette how he fired the shot.

“Did you find out the direction he shot?” someone asked Barnette. “He was in the car,” she replied.

But on the witness stand, as KARE reports, Barnette said Noor never told her anything about the shooting, even though under MPD policy she was supposed to ask a couple of basic questions, like the direction of the shot.

Barnette is also captured on her own body camera turning it off and on.

“The blue wall of silence is alive and well,” Lawyer Bob Bennett, who negotiated a $20 million settlement for Damond’s family, said of the content of the videos. “Who were they protecting and serving?”

Joseph Daly, an emeritus professor at Mitchell Hamline School of Law, had a similar view about the impact of the body-camera videos, according to the Star Tribune.

“I think the public is going to see a conspiracy of silence,” said Daly. “The public’s going to look at this and say, ‘Is this what police officers do all of the time when they get in trouble? They tell them to keep their mouth shut?’ ”