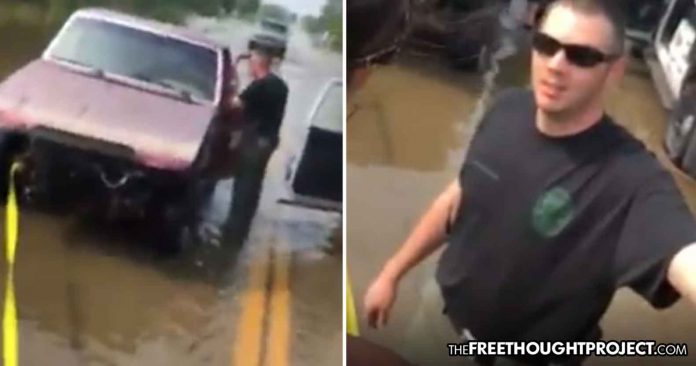 Sperry, OK — Residents in Oklahoma are experiencing near-historic flooding this week as well as damaging wind and tornadoes. Thousands of people have been displaced and have lost everything. Adding to the extreme harsh hand dealt out by mother nature is the fact that in at least one instance, people trying to save their property or rescue others are being harassed and fined by police—for being good Samaritans.

Tulsa and surrounding areas are being hit hard by floods this week as government issues warnings and closes roads. Tulsa County Emergency Management Director Joe Kralicek warned of that there may be an extremely dangerous situation due to a river in the area cresting.

Despite warnings and road closures, many residents are trying to get to their homes to prepare them for high water and see if their neighbors need help. This is not going over too well with police who are trying to keep people out of the area.

Flood victims attempting to help other flood victims clashed with police this week and part of this interaction was captured on video. The video was uploaded to Facebook and has caused quite the stir on there as well as people argue over who is right, the cop or the people trying to help others.

In the video, we see the cop identified as Sperry Police Officer Bobby Sappington Jr. swearing at residents receiving help, calling them “stupid” and threatening to arrest them. Exactly what happened before the video started is unclear. However, the officer’s choice of words and threats was entirely evident.

The video begins as a group of people are attempting to tow a truck from the flooded waters and they are stopped by police. Officer Sappington begins yelling at the person in the truck getting towed telling him “how f**king stupid is that!”

He then approaches the woman who is in the other vehicle towing the truck and demands she stop helping people, noting that police should be the only ones on the road.

While this is certainly a noble gesture by police to claim a monopoly on rescuing people, we have seen the utter chaos that ensues when there are not enough rescuers in instances like Hurricane Katrina and the 2017 Harvey floods in Houston. Had it not been for civilian rescue operations like the “Cajun Navy,” an untold number of people may have suffered or died.

No one here is claiming that unqualified people should go rushing into dangerous situations. However, if your family or property, or even friends and complete strangers need help, it is no one’s right to stop you from helping.

What this case below illustrates is the mandatory dependency upon the state that is forced on people for all aspects of their life—including personal safety. If you try to show some autonomy and help others and somehow overlap with what the police are trying to do, you will be extorted or arrested—which is exactly what happened to the people in the video below.

The man who uploaded the video, Parker Smith, posted it to Facebook with the following caption explaining what happened after the video turned off:

MAYBE I SHOULD ALSO SAY THIS. AFTER WE HELPED THE MAN OUT THAT JUST LOST EVERYTHING HE OWNED INCLUDING HIS TRUCK OFFICER SAPPINGTON WROTE HIM NOT ONE BUT TWO $500 DOLLAR TICKETS. TERRIBLE PERSON AND MOST DEFINITELY NOT THE PERSON I WANT RESPONSIBLE FOR THE SAFETY OF OUR COMMUNITY. PLEASE GET HIM OFF THE POLICE FORCE.

As TFTP reported at the time, Jared Kirkendoll told The Free Thought Project that he and his friend drove 16 hours from Illinois, in order to help out victims of the flood.

“We were helping people out and taking water and supplies to people,” Kirkendoll said. “In fact, we were dropping water to people and we had four people on the buggy, taking them to land.”

Kirkendoll was in a massive truck with 4′ tall tires made for traversing flood waters and he was helping anyone who needed it. But just as the Sperry officer did in the video above, Kirkendoll was threatened with arrest and kicked out of the area.