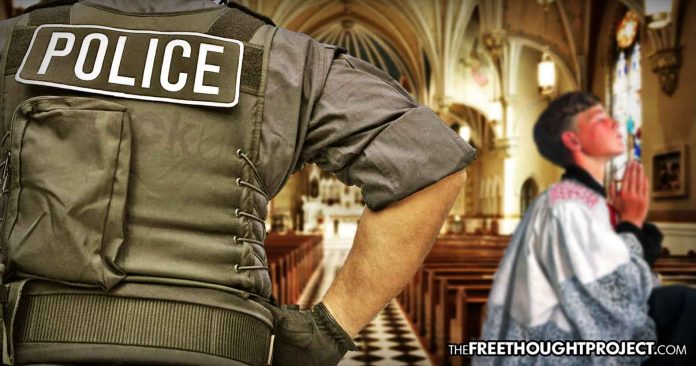 Editor: If this surprises anyone, then you have simply not been paying attention. The Catholic Church is overrun by priests who molest children. That doesn’t mean that all priests are bad, but coverups don’t help fix the problem. The Cops who helped cover this up were only protecting and serving the sicko priests who prey on children. This world is a scary place when we can’t rely on police to protect us or our spiritual leaders to guide us. -Dean

Philadelphia, PA — For those who have been keeping up with the child sex abuse scandal in the Catholic church that erupted late last year in Pennsylvania, many have been wondering how it was allowed to go on for so long without anyone getting charged or arrested. Now, it appears that we have the answer—the police were complicit. But it wasn’t just in Pennsylvania, we are also learning it was elsewhere in places like Buffalo, New York.

“Priests were raping little boys and girls, and the men of God who were responsible for them not only did nothing; they hid it all,” according to the report of the Pennsylvania grand jury. And police went along with it.

During a grand jury report into the child sex abuse by priests in Pennsylvania last year, the state Attorney General, Josh Shapiro provided insight into how priests were allowed to go on for decades preying on children. He singled out the two groups responsible for covering up the crimes of the church.

One of the groups named by the AG was the Catholic Church hierarchy like the archbishops and cardinals who reacted to allegations of child rape by simply transferring the priest to a new church or failing to act at all. The other group Shapiro named was law enforcement, who he says acted in tandem with the abusive priests to keep their horrific habits from ever reaching the public eye.

“The abuse scarred every diocese,” he said. “The cover-up was sophisticated. The church protected the institution at all costs.”

Not only did the church protect pedophile priests, but the investigation revealed a “failure of law enforcement,” according to Shapiro.

According to the investigation, at the same time the church was covering up the abuse by protecting the pedophiles, it also had assistance from police or district attorneys who aided in covering it up as well. Sometimes this aid was in the form of looking the other way, while other times, it involved actively thwarting investigations.

One District Attorney was even caught on record deliberately blocking investigations into the rape of young boys by priests. In 1964, Beaver County district attorney Robert Masters was presented with evidence that a Catholic priest was raping several young boys. However, he blocked the investigation to prevent “unfavorable publicity.”

so before this “groundbreaking law” it was totally okay NOT to report priests raping children??

“I have, in order to prevent unfavorable publicity, halted all investigations into similar incidents with other young boys,” Masters wrote in an Aug. 4, 1964, letter to Pittsburgh Diocese Bishop Vincent Leonard.

In the case in Buffalo, the AG Letitia James is fighting to hold someone accountable for what they are referring to as a conspiracy between child raping priests and law enforcement to actively cover up the abuse.

As the Buffalo News reported this week:

AS A REPORT IN SUNDAY’S NEWS SHOWED, POLICE IN BUFFALO WENT ALONG, TOO. COPS HERE WERE UNDER ORDERS NOT TO ARREST CATHOLIC PRIESTS BUT, INSTEAD, TO REPORT THEIR CRIMES TO THE LOCAL BISHOP WHO COULD THEN CONTINUE THE DIRTY WORK OF COVERING IT UP. WHETHER ANY PEDOPHILES WERE AMONG THOSE WHO WERE FREED FROM LIABILITY HAS NOT BEEN ESTABLISHED, BUT WHAT IS CLEAR IS THAT, DESPITE THE NUMBERS OF PRIESTS CREDIBLY ACCUSED, FEW WERE EVER HELD TO ACCOUNT.

CAN ANYONE BELIEVE THAT IT DIDN’T HAPPEN HERE? MORE THAN 100 PRIESTS HAVE BEEN IMPLICATED AS CHILD MOLESTERS IN WESTERN NEW YORK AND HARDLY A ONE SPENT EVEN A NIGHT BEHIND BARS. HOW, WITHOUT POLICE OFFERING AID AND COMFORT, WOULD THAT BE POSSIBLE?

A FORMER VICE SQUAD DETECTIVE, MARTIN HARRINGTON, AND OTHER RETIRED OFFICERS CONFIRMED TO THE NEWS THAT THEY WERE ORDERED NOT TO ARREST CATHOLIC PRIESTS, BUT WERE INSTEAD TO TELL THE BISHOP. AND BISHOPS, AS HAS BECOME CLEAR – BOTH HERE AND AROUND THE WORLD – DESPERATELY WANTED TO HUSH IT UP, EVEN IT MEANT IGNORING THOSE CHILDREN WHOSE LIVES HAD BEEN CATASTROPHICALLY UPENDED AND THOSE OTHERS WHO WOULD BECOME VICTIMS OF PRIESTS TRANSFERRED TO UNSUSPECTING PARISHES.

As the Free Thought Project has previously pointed out, pedophilia among the elite is rampant. In instance after horrifying instance, the Free Thought Project continues to push these issues to the forefront — in spite of mainstream media claiming that talk of elite pedophilia is akin to tin foil hat wearing conspiracy theory. But as more cases like this surface, we are seeing the disgusting underbelly that is abuse of power to prey on society’s most vulnerable.

The good news is that this paradigm seems to be shifting. As the scandal in Pennsylvania illustrates, even some folks within the mainstream media have begun to report on this nightmarish reality.