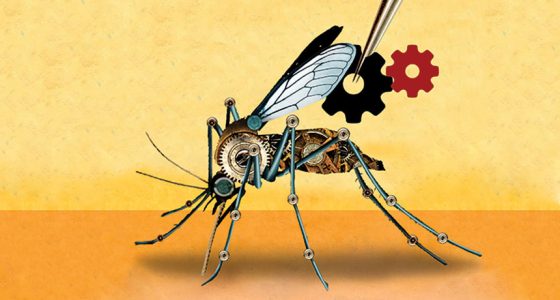 One of the most dangerous experiments that mankind has ever embarked upon is DARPA’s desire for gene drive technology. Scientists now have the knowledge and the tools they need to create and deliver “Doomsday genes” which can selectively target and exterminate an entire species.

According to Sputnik News, and as previously reported by SHTFPlan,  the United States highly-secretive and advanced military research body DARPA (Defense Advanced Research Projects Agency) announced that it will invest tens of millions of dollars into genetic extinction research. While the official aim of this research is said to be fighting harmful insects, like mosquitos which carry Malaria, there are significantly darker implications and speculations surrounding the possible use of such a tool.

Joe Joseph of The Daily Sheeple said a quick Google search would give you enough information to let you know how horrific this kind of technology can be. “…and you’ll find it fascinating just at how unbelievable a weapon this could be, how unintentionally mistakes can be made that can cause irreversible damage…irreparable damage…to the human race. And I mean, FAST!” Joseph said. “A gene drive…if let’s just say there’s a mistake, you could feasibly wipe out the human race in a very very short period of time. It’s an unbelievable tool at the disposal of madmen.”

Emails released under the Freedom of Information Act (FOIA), suggest that the U.S.’s uber-secretive military body, DARPA, has become the world’s largest funder of this “gene drive” research.

Silvia Ribeiro, Latin America director of the ETC Group, an international organization dedicated to the conservation and sustainable advancement of cultural and ecological diversity and human rights, said:  “When it is developed under an umbrella of military research, you get a clear notion that there can be a dual purpose of this research.”

Jim Thomas, a co-director of the ETC group which obtained the emails, said the US military’s influence in furthering this technology would strengthen the case for a moratorium. “The dual-use nature of altering and eradicating entire populations is as much a threat to peace and food security as it is a threat to ecosystems,” he said. “Militarization of gene drive funding may even contravene the Enmod convention against hostile uses of environmental modification technologies.”

But while we are on the subject of UN bans, the sanctions they placed on North Korea are being willfully ignored by the rogue regime.  It stands to reason that should a military seek the use of this technology, they will also defy the UN’s “authority.” –SHTFPlan

Humanity is known for making mistakes, but we can’t come back from an extinction of our own making. “You can call it a ‘tool’ all day, [but] it’s a weapon,” says Joseph.

This is the book on DARPA–a compelling narrative about this clandestine intersection of science and the American military and the often frightening results. –The Pentagon’s Brain: An Uncesored History of DARPA, America’s Top Secret Military Research Agency