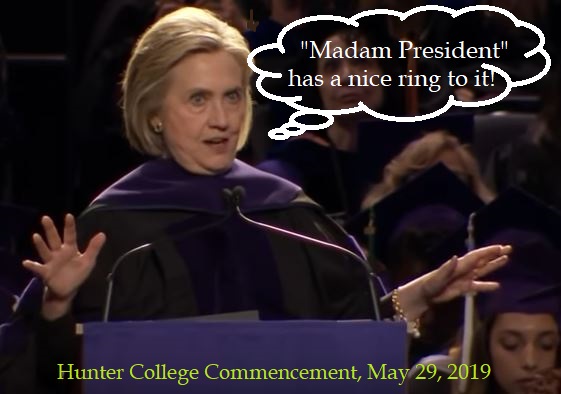 It is now more than 2½ years since she lost the 2016 presidential election to Donald John Trump, but Hillary Clinton is still bitterly in denial and still coveting the presidency.

Last Wednesday, May 29, 2019, Hillary was the keynote speaker at the commencement of more than 2,400 Hunter College students in New York City’s Madison Square Garden.

Hunter College is one of the constituent colleges of the public, i.e., taxpayer-funded City University of New York (CUNY), in Manhattan, NYC.

Hillary began her speech by referring to Hunter College President Jennifer J. Raab’s “Madam President” title to imply that she (Hillary Clinton) should be President of the United States. She said:

“Thank you, thank you so much. I have to say this has been one of the most inspiring heartfelt commencements that I’ve ever experienced, and I am thrilled, I’m thrilled to be a part of it today. [Turning to look at Hunter College president Raab] ‘Madam President’ — that has a nice ring to it!”

Hillary then used the rest of her speech to attack President Trump and to continue the fiction that Russia had interfered in the 2016 election.

You can hear/watch her entire speech here, if you insist on torturing yourself.