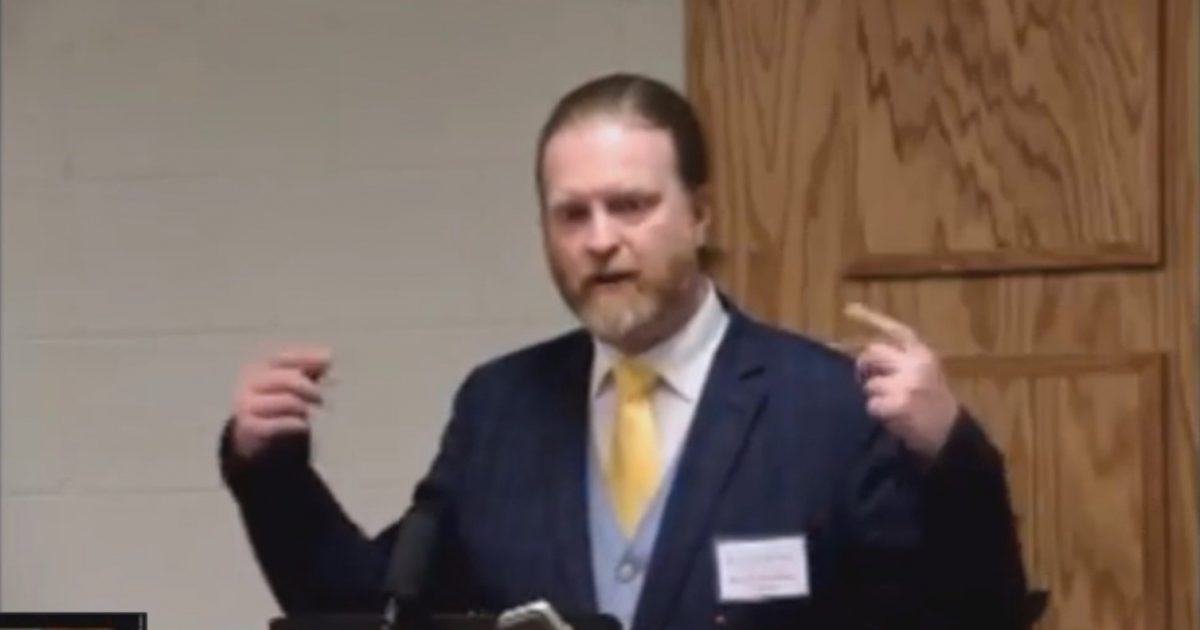 Tennessee House Speaker Glen Casada’s aide Scott Alan Buss, who is also a contributor to my site, was wrongfully attacked by a rapid reporter for News Channel 5 out of Nashville for his commentary that he provides on his website, Fire Breathing Christian, in which he points out the Satanic plot of America’s public schools, the spirit of antichrist in both the Roman Catholic Pope, as well as our own president, and the documented evidence of the propaganda of measles by our government.

Phil Williams of News Channel 5 probably has a huge defamation lawsuit headed his way as he attempts to paint Buss’ commentary as taking place during working hours, even though clearly the timing of Buss’ posts occur either after hours or during lunch breaks.

“I think the fact that they would hire someone like this who openly calling the public schools satanist is extraordinarily disappointing, but unfortunately not surprising,” said House Democratic leader Mike Stewart of Nashville, according to Williams’ report.

Yet, neither Williams nor Stewart apparently know enough about the Bible to refute Buss’ plethora of evidence to support his accusations.

Furthermore, the fact that Casada has retained Buss for years and continues to employ his services says plenty about his backing.

While others have resigned, such as Cade Cothren, Michael Lotfi and Shawn Hatmaker, the people of Tennessee are in for a rude awakening if they expect Buss to back down amid the controversy.  In fact, he thrives on it to use it as an opportunity to educate the public on their foundations of the Bible and Christianity.

The disgusting report in which Williams could only produce things Buss put out, distort his time and utterly fail to refute Buss’ claims because he is a useful idiot propagandist.

In writing about the public school system, Buss voices my own opinions, which I’ve been vocal about, and frankly is the voice of our founding fathers.

“A system built on that foundation cannot be repaired,” Buss said. “It is irreparable. It can’t be fixed. It can’t be saved. It has to be torn down.”

Each of the things Buss promotes there are absolutely true.  Williams is just to ignorant and rebellious towards his Creator to know better, and he peddles his lies to his audience.

Christians, he argues, should not teach in public schools, saying when they do they are “modeling a satanic approach to the pursuit of knowledge.”

Public school parents are exposing their kids to evil, he claims, and feeding them “to the big gay beast.”

Buss also says there is a “homo-jihad” to get to children.

The Democratic leader was not surprised.

“Casada obviously led the fight to attack public schools with vouchers – he was very open about it,” Stewart said.

“And I do think he represents a particular type of Republican radicalism and he hired people who shared those views.”

Other posts from Casada’s research analyst portray the kids who survived the Parkland school shooting as “government programmed drones.”

A post from the Supreme Court hearings for Brent Kavanaugh claims “leftist women are encouraged to rape reputations with impunity.”

All those are true. We documented over and over how Parkland kids were coached, making them just what Buss said, “government programmed drones.”

There is a jihad by both the LGBT community, as well as Islamists to indoctrinate America’s children for their own agendas, which are contrary towards the Christian foundations of America.  Williams has no response though.  All he can do is cite Buss’ words as though that is enough to refute him, but you can’t refute a man of conviction with his own words.

Williams then though he would shame Buss further with other posts created by him.

And more of this @GlenCasada appointee’s view of public schools pic.twitter.com/eqilFt4dK2

All of those are true. If Williams had a refutation of these statements, he would provide them.  The fact is that Williams doesn’t like what Buss says or prints, which is protected under the First Amendment and part of America’s history.

In one blog post, he says those concerns are just “insane, hysterical, anti-family, pro-State propaganda.”

Perhaps Williams should actually do some real research and reporting rather than engaging in Operation Mockingbird.   I would recommend he start with investigative journalist Corey Lynn‘s latest series documenting the measles fiasco and the millions of dollars made in that entire hoax.  You can read that here, here, here, here, here and here.)

Buss is clear in his allegiance to Christ alone as King.

With titles such as “There is no God-given right to worship false gods,” which is part of the First Commandment and “Why do we allow the open practice of Islam, witchcraft and Satanism in America?” Buss draws controversy, but that is always a good thing.  It means you are challenging people to think beyond the propaganda they feed on.  In Buss’ case, he is challenging professing American Christians to think about what the Bible says and act accordingly.

Buss says that Christians need to “to test all things – including their most cherished notions of freedom, liberty and patriotism.”

Buss not only aides in the Tennessee legislature and writes on his personal blog and shares those contributions with us, but he is also the Tennessee state director for Capitol Ministries, which reaches out to lawmakers through prayer groups.

While Williams falsely claims that Buss posts things “during working hours,” he seems to have not been careful in documenting that Buss’ posting was taking place either while he was at lunch or off the clock.

Buss communicated this despite the fact that Williams printed his libel against him.

“The Bible study is done on my own time, as are various public expressions of my Christian worldview,” Buss wrote to Williams.

Williams continued to promote the reference that the posts were occurring on “state time” despite the fact that Buss said they didn’t occur then.  Again, ever heard of lunchtime, Mr. Williams?

Williams reached out to a godless Democrat though.

“The question here is: was this also a no-show job?” Stewart said. “Did this guy show up at his office but spending all of his time putting out radical far-right propaganda?”

“I think what I would like to know if: do the tweets reflect somebody who really was not hired to do work for the people of Tennessee, was really hired like we saw with some other people to be political operatives on the state dime?” Stewart said.

Let’s question that, shall we?  Was Mr. Stewart elected to work for the people?  Yes.  Is he?  Well, we could probably spend pages and pages dealing with unconstitutional stands that Mr. Stewart has taken and votes cast.  We could even take on his unAmerican, antiChristian sentiment contained in his comments from Mr. Williams’ article to make the point that he is attacking a Tennessee citizen over his Christian faith, something our founding fathers would have abhorred.

I always advocate for men like Scott Buss as they are at the tip of the spear in our culture and are unashamed and unwavering in their faith and statements.

Buss plans on providing a radio interview with me once he is able to do so to address the matter at SettingBrushfires.com, which can be heard every weekday from 6-7am.