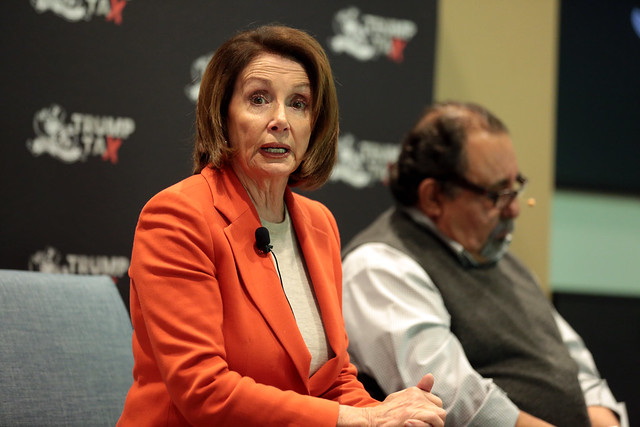 House Speaker Nancy Pelosi attacked Facebook on Wednesday as “willing enablers” of Russian interference because they’ve refused to take down a parody video making fun of her by slowing down her speech to make her sound drunk.

The media and Democratic Party for a week now have led a campaign to demand Facebook and Twitter censor two videos — which they call “doctored” — making fun of Pelosi.

Last Thursday, Trump shared a video to Twitter from Fox News which used jump cuts to highlight Nancy Pelosi’s stammering (which she does constantly):

Rudy Giuliani, who is not part of Trump’s campaign, also linked to a comedy video on Facebook which slowed down Pelosi’s speech so she sounded drunk (this is a joke which has been done millions of times):

House Speaker Nancy Pelosi (D-Calif.) said Wednesday that Facebook’s refusal to take down an altered video of her shows that the company’s leaders were active contributors to online disinformation and “willing enablers” of Russian interference in the 2016 election.

Pelosi’s comments to KQED News, her first public response to the video since The Washington Post first reported its spread online last week, revealed a dramatic escalation of tensions between the Democratic leader and the world’s most popular social network.

“We have said all along, ‘Poor Facebook, they were unwittingly exploited by the Russians.’ I think wittingly, because right now they are putting up something that they know is false. I think it’s wrong,” she said, according to a transcript of the conversation provided by Pelosi’s office. “They’re lying to the public. … I think they have proven — by not taking down something they know is false — that they were willing enablers of the Russian interference in our election.”

“For me, I’m in the arena, I’ve been the target all along,” Pelosi added. But “I wonder what they would do if [Facebook chief executive] Mark Zuckerberg wasn’t portrayed, you know, slowed down, made to look” drunk, she said. If it was “one of their own, would this be — is this their policy? Or is it just a woman?”

Note, Pelosi says of Facebook that “they are putting up something that they know is false,” even thought this was put up by one of their 2+ billion users.

To say Facebook put the video up is a lie. After lying about Facebook putting the video up themselves, she then says, “They’re lying to the public” by allowing video mocking her to remain on their site.

She then effectively threatens them with regulations by accusing them of being “willing enablers of the Russian interference” and suggests Mark Zuckerberg is so insane that he would ban everyone who makes fun of him from Facebook if he was in her position, even though he’s one of the most widely mocked people on the planet and doesn’t censor everyone who makes fun of him.

There are entire communities dedicated to making fun of him with memes portraying him as an alien and as I far as I know, he’s never banned any of them. The media and the Democrats genuinely want all criticism/mocking of Democrats to be banned from the internet. That’s what this amounts to.

A month or so ago, it was “we must censor far-right conspiracy theorists,” now it’s “we must censor Fox News and the President of the United States for using jump cuts to highlight Nancy Pelosi’s stammering” and “we must censor random Facebook users for making fun of Pelosi by slowing down her voice to make her sound drunk.”

This is so bats**t crazy it’s hard to even comprehend.

While one could imagine the masses going somewhat along with Big Tech banning “far right” dissidents for their “dangerous” political views, I can’t imagine any normal person thinking all criticism/mocking of Democrats being banned is A-OK.

Our prog-globalist overlords are losing their minds.

Whereas in the past we had diabolical geniuses like George Soros manipulating our politics from the shadows (he still is) with a clear agenda and plan, now we have a bunch of whiny leftist journos and left-wing political hacks waging a crusade to ban absolutely everyone who disagrees with the latest iteration of prog-globalist orthodoxy.