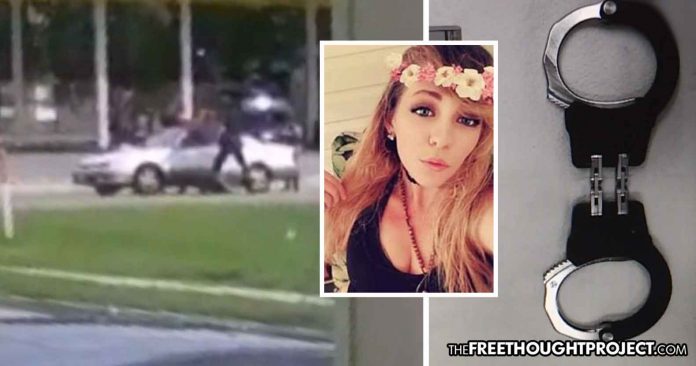 Chesapeake, VA — It’s been nine months since police claim 19-year-old Sarah Wilson allegedly got a hold of a gun and killed herself in police custody while her hands were cuffed behind her back. Since then, her mother has been grieving and also crying foul after police are sticking by the story and refuse to release any information.

As TFTP reported at the time, Wilson allegedly committed suicide on July 25, 2018, during a traffic stop near the intersection of Berkley Avenue and Wilson Road, according to the Chesapeake Police Department. According to police, while handcuffed with her hands behind her back, Wilson was able to acquire a Taurus Judge handgun, place it in her mouth, and pull the trigger.

Dawn Wilson, Sarah’s mother has since come forward to speak out about the inconsistencies in the case.

“There’s just so many unanswered questions, and that’s the second hardest part of losing a child – of losing my child,” Dawn told WAVY, earlier this month.

“In all of her life I have never known of her to shoot a gun, own a gun, or even hold a gun,” said Wilson. “I’m not pointing fingers, I don’t know what happened. I wasn’t there, but I need to know, and I think that’s fair I’m her mom.”

Wilson explained to ABC 13 that her daughter was the passenger in a car that was pulled over during a traffic stop. Police told Wilson that during the stop, Sarah produced a gun and used it to take her own life.

The driver of the car was 27-year-old Holden Medlin who allegedly resisted arrest during the stop and took off running. While police attempted to restrain Medlin, they claim that Wilson was handcuffed with her arms behind her back when she got the gun out of the car, “contorted” her body and shot herself in the head.

How exactly police missed a Taurus Judge handgun while handcuffing Wilson is a massive question as the gun is 5.5″ tall, and 10.5″ long. The gun is so large it can shoot both 45 Colt rounds and 410 shotgun shells.

“Things are not matching up, somewhere somehow, there is a discrepancy,” said Wilson who said that police have told her one thing while telling the media something completely different.

“She was handcuffed, and she managed to put a revolver in her mouth while handcuffed. That’s what the investigator told me last night,” said Wilson at the time. “If that is the case its very unfortunate and tragic but there is a level of negligence there.”

Even more terrifying than a handcuffed teen somehow managing to get a gun and put it in her mouth to kill herself is the fact that witnesses are saying something entirely different.

“There is a few different stories, but they all end the same, that the police shot her,”said Wilson last year.

According to Wilson’s attorney, Jennifer Langley, the CPD have refused to release any information on the case and after the shooting they gathered up all the surveillance footage from around the area and have kept it under lock and key.

“Police immediately after her death started canvassing the neighborhood and getting everything they could,” Langley said. “Video evidence was gathered by the police, statements with any potential witnesses were taken, and a lot of the information is controlled solely by them.”

As WAVY reports: Suicide is a crime in Virginia, which allows police to withhold certain investigative records from the public. Police are supposed to release some investigative records to the next of kin – in this case, Dawn – after a death has been ruled a suicide, but because Medlin was charged with crimes during the traffic stop, the CPD is allowed to redact details from those records as well.

What’s more, while police originally told the media that this was a routine traffic stop, Wilson said they told her that they’d been investigating the driver and the stop was anything but routine. This fact would later be admitted by the police.

One of the officers during the stop was also wearing a body camera which could provide many answers about what really happened. However, police said that the camera malfunctioned after it “fell off” during the stop.

A short and very disturbing video of the aftermath of the shooting was posted to social media with the mother’s permission. In the video, we can hear the witnesses say that “police shot her.”

Now, another video has been obtained by Wilson’s attorney and it shows a different angle.

“There were people there when my daughter passed,” Dawn Wilson said. “At first I was told there was no video and then I was told there was video, it’s not being released. I want to see it. That information. Not that it’s ever going to take this pain away, but maybe then I could focus on healing instead of wondering what happened to my baby that day.”

As for the Chesapeake Police Department, they are remaining tight-lipped and refusing to answer any media questions. The investigation has since ended, and other than releasing the suicide claims, the department refuses to comment on its outcome.

Even if everything the police are saying is true, the level of negligence on behalf of the officers is staggering. To miss such a massive gun and fail to properly restrain a 19-year-old girl, allowing her to shoot herself in the face, is unacceptable.

“She should have not had access to a gun,” Langley said. “How did a 19-year-old girl, handcuffed behind her back in hinged handcuffs, get to a weapon, put a gun in her mouth, and pull the trigger in the presence of four to five police officers? How did that happen?”