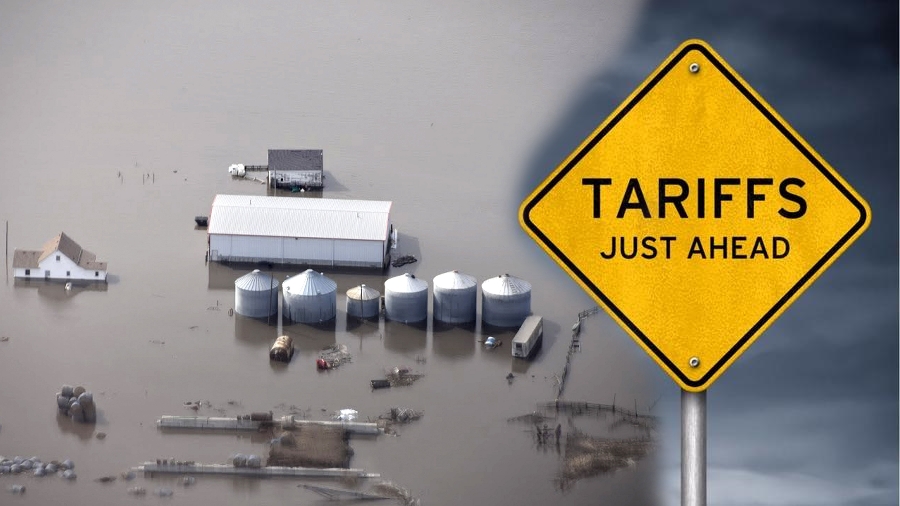 There’s little doubt that the US is headed into a food crisis. Here’s the bottom line. While American farmers are dealing with one natural disaster after another, President Trump has placed tariffs on the two countries from which we import the rest of our food.

A perfect storm, am I right?

Our farms are in real trouble.

Flooding in the midwest has been going on for months (and in some areas, waters are peaking.) Farmers haven’t been able to plant due to the sodden ground. Levees are failing all over the place. Hundreds of tornadoes have swept other farming areas in just the past month. California is unseasonably wet and cold, and they’re also dealing with a labor shortage, as migrant workers aren’t being allowed in as usual.

None of this sounds good for homegrown food in America and could well lead to a famine. And if it’s not a famine, we’re guaranteed to pay higher prices at the grocery store due to these catastrophes, as farmers struggle to recover.

We import a LOT of our food.

According to an article on Quartz, a vast amount of our food comes from other places. We’ll discuss two in particular.

According to the U.S. Department of Agriculture (USDA), the U.S. imports billions of dollars worth of seafood from China each year. Farm-raised seafood such as tilapia, shrimp, salmon and catfish is shipped directly from China…

Imports of fresh fruits and nuts steadily increase each year, with Costa Rica and Mexico being the top suppliers to the U.S. This is due in part to their proximity to the U.S. and ability to import fruits closer to their picking time… Chinese pine nuts are a few. Fresh fruit arrives daily into the U.S. from Canada, Mexico, Chile and Peru. The list of fruits that are frequently imported from these countries include produce like bananas, pineapples, avocados, apples, honeydew melons, blueberries, cantaloupe, mangoes, nectarines and lemons…

And don’t forget Mexican avocados and berries or that Big Agri sends American meat to be processed in China who then sends it back.

(QUICK UPDATE: I think some folks are missing the point. I’m not recommending you eat tilapia etc. from China. I’m saying that our grocery stores are filled with imported food from China and when those prices go up, a lot of people will be in real trouble.  The fact that the food is crappy quality has nothing to do with the point of the article – which is food shortages and rising prices. ~ DL)

So that sounds good – at least all our food isn’t grown here, leaving us to starve next year. Right? Not so fast.

Now there are tariffs on the two places from which we import the most food.

If the government had a way to make all these natural disasters occur almost simultaneously to keep ups from growing food here, I’d think the scheme was positively Machiavellian. But, no, we are just dealing with really horrible natural disasters topped off by some poorly timed political machinations.

Because President Trump has opted to place tariffs on the two places from which we import the most food.

At the same time that we’re having a lot of trouble growing our own food.

Now, regardless of what you think of tariffs, the reasons behind the tariffs, or illegal immigrants, you need to understand that the cart of groceries you buy now versus the cart of groceries you buy next year is going to be vastly different in price. Even though it sounds like I’m being political and bashing Trump (or not bashing him enough, depending on your views) all I’m trying to point out is the end result of all this. We need to think about how this affects us, the normies who have to budget for groceries.

We’re looking at both food shortages and higher priced food due to tariffs. Both of ’em at the same time.

If that isn’t a perfect economic storm for lower-income-earning Americans, I don’t know what is.

What can we do?

I strongly suggest you prep like there’s no tomorrow. Nearly half of all Americans are already in a position where it’s tough to pay rent and buy food. And we ain’t seen nothin’ yet.

Buy whatever you can get your sweaty little hands on and store it away carefully. (I’ve got a brand-spankin’ new book coming out on this topic next week – you can pre-order it here. It’s an updated version of The Pantry Primer and it’s got additional content and pictures and everything.)

You need to purchase as inexpensively as possible food that will last a long time, like rice, dried beans, wheat berries, canned goods, peanut butter, and freeze-dried foods. You need to garden if you can and preserve the excess through canning and dehydration. Here’s how to make meals with all this stuff if you generally only cook with fresh ingredients.

Maybe things will dry out and our crops will be bountiful. Maybe the tariffs won’t add too much to the price of our groceries.

But I really don’t think that’s what we’re going to see happening. What about you? What do you think about all the tariffs and the weather events and their potential effect on our food supply? Share your thoughts in the comments below.