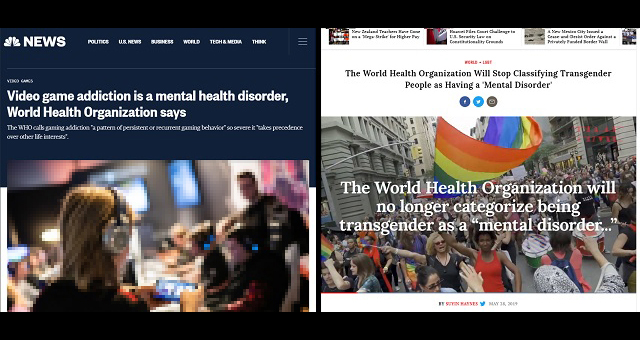 Playing too many video games is a mental illness but believing you’re the opposite sex is not, the World Health Organization declared on Tuesday.

Top global gaming organizations are asking the World Health Organization to reverse its inclusion of “gaming disorder” as a disease, according to a press release sent by the Entertainment Software Association on Saturday.

The World Health Organization (WHO) officially recognized gaming disorder over the weekend as a part of its 11th edition of the International Classification of Diseases (ICD-11). This was a decision the industry was awaiting since the WHO detailed its intentions last summer.

From TIME Magazine, The World Health Organization Will Stop Classifying Transgender People as Having a ‘Mental Disorder’:

The World Health Organization (WHO) will no longer categorize being transgender as a “mental disorder”, after a major resolution to amend its health guidelines was approved May 25.

The United Nations’ health agency approved a resolution to remove “gender identity disorder” from its global manual of diagnoses, in a move that will have a “liberating effect on transgender people worldwide,” says Human Rights Watch. According to the newly-revised version of the International Classification of Diseases (known as ICD-11), published by the WHO, “gender identity disorders” have been reframed as “gender incongruence.” Gender nonconformity is now included in a chapter on sexual health, rather than being listed with “mental disorders” as was the case previously. Activists are now hoping that the ICD-11 will be implemented by the WHO’s 194 member states over the next three years.

Whoever made these guidelines is mentally ill.