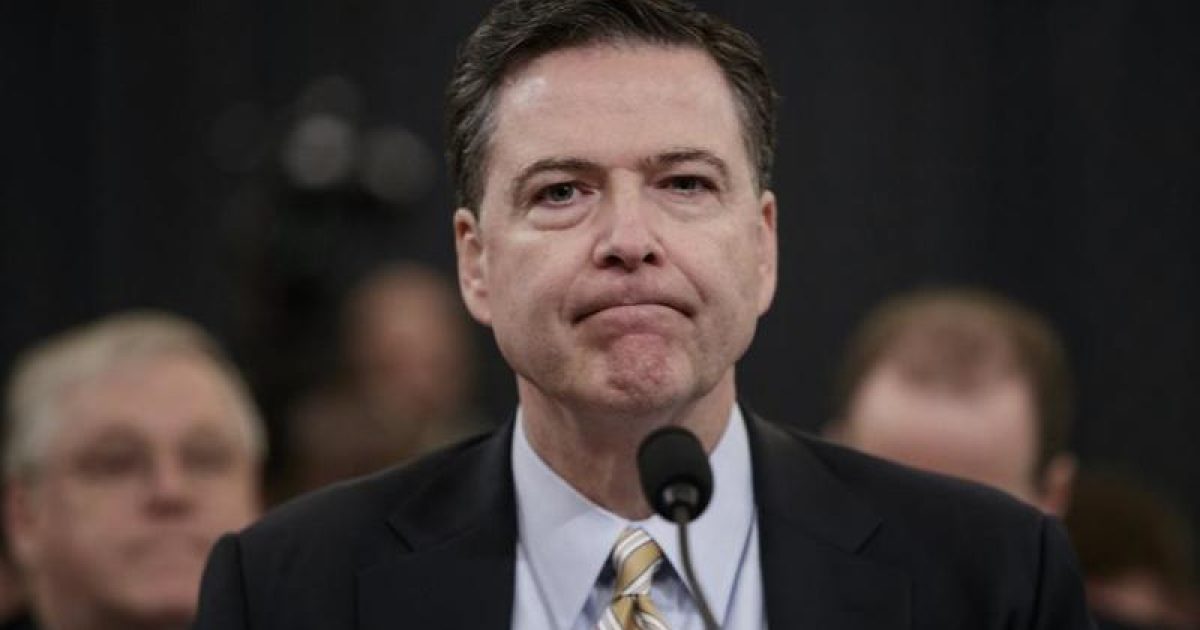 Well, I can’t say this is surprising, but a female group of former FBI recruits filed a lawsuit against the Federal Bureau of Investigation alleging that its 20-week training academy discriminated against women.

The training, which included firearms, academics, defensive tactics and navigating high-risk situations not only allegedly discriminated on the base of gender but also race.

Former FBI Director James Comey is named in the complaint by one of the plaintiffs for dismissing her complaint.

However, that’s not the only person named.

According to the complaint, President Donald Trump’s nominee to lead Immigration and Customs Enforcement, Mark Morgan, who oversaw the academy as a former top FBI official.

The New York Times, one of Comey’s previous allies, reported:

Male instructors at the academy in Quantico, Va., exposed the women beginning in 2015 to a hostile work environment, sexual harassment and inappropriate jokes, according to the lawsuit. One woman said that an instructor referred to an African-American female trainee as “spaghetti head,” a reference to her braids. The woman also said training agents made repeated sexual advances.

In particular, the lawsuit takes aim at the tactical training that plays out Hogan’s Alley, the academy’s mock town where hired actors play terrorists and criminals. Trainees practice making dangerous arrests where they use weapons. Many of the female agent recruits were kicked out of the academy during this phase more quickly and more often than men were.

Prior to Comey’s tenure as Director which began in September 2013, no sexual misconduct charges had been filed by the Office of the Inspector General (OIG). Most recently, an extramarital relationship between FBI employees Peter Strzok and Lisa Page was revealed during Congressional investigations into the FBI, which had been uncovered by Horowitz through a search of text messages between the two agents.

Perhaps the most shocking revelation, however, is that Comey attempted to thwart Horowitz’s investigation.

As Horowitz explained in his March 2015 final report on how law enforcement agencies handle sexual-misconduct complaints, his office’s ability “to conduct this review was significantly impacted and delayed by the repeated difficulties we had in obtaining relevant information from both the FBI and DEA as we were initiating this review in mid-2013.”

After pulling teeth to try and obtain records from the FBI, Horowitz was finally presented with unredacted information that satisfied his requests – however, it was “still incomplete.”

Lynch supported Comey’s defiance of the IG via a July 20, 2015, memo from DOJ Office of Legal Counsel principal-deputy AG Karl Thompson. Thompson charged law enforcement agencies could redact information in its files and withhold information from the Inspector General. It was one of her first acts as Obama’s new Attorney General, who was sworn in to office on April 27, 2015. –DC

It was only after a multi-year battle with the Obama administration that Horowitz was finally able to obtain the information he sought after Congress passed the Inspector General Empowerment Act of 2016, restoring his office’s ability to access information without having to ask for it first.

Of note, Horowitz’s report on FBI malfeasance during the 2016 election is due out in several weeks – which many think will provide official confirmation that the top ranks of the FBI and DOJ engaged in a highly politicized hit-job on President Trump and his team in an effort to elect Hillary Clinton while undermining Trump.

Comey attempted to stifle the investigation.  The Daily Caller added:

Horowitz reported Comey attempted to thwart the investigation, as he sought to examine the bureau’s recent history of sexual harassment and misconduct charges.

As Horowitz explained in his March 2015 final report on how law enforcement agencies handle sexual-misconduct complaints, his office’s ability “to conduct this review was significantly impacted and delayed by the repeated difficulties we had in obtaining relevant information from both the FBI and DEA as we were initiating this review in mid-2013.”

Horowitz said the FBI and DEA initially refused to provide his office “with unredacted information that was responsive to our requests.”

After months of protracted discussions with the FBI, the bureau “found that the information was still incomplete.”

Congress denounced Comey’s refusal to open the FBI’s record and eventually led to the passage of the Inspector General Empowerment Act of 2016, which requires all federal departments and agencies to share all records with the IG. It became law on Dec. 16, 2016.

Horowitz told The Washington Post in December 2017 some perpetrators within federal, law enforcement agencies received light punishment for their sexual misconduct. The summary of incidents, listed below, confirms Horowitz’s findings.

Lynch supported Comey’s defiance of the IG via a July 20, 2015, memo from DOJ Office of Legal Counsel principal-deputy AG Karl Thompson. Thompson charged law enforcement agencies could redact information in its files and withhold information from the Inspector General. It was one of her first acts as Obama’s new Attorney General, who was sworn in to office on April 27, 2015.

Sixteen women have sued in the lawsuit, many are current FBI employees.  They are demanding $300,000 each and demanding that more female training instructors be hired.

According to the lawsuit, training instructors penalized and dismissed female trainees at a “rate significantly and disproportionately higher than their male counterparts,“ who were allegedly allowed to retake tactical exams that the women were not.

One of the women, Clare Coetzer, washed out of training in June 2018 after passing all the previous required courses. During training, she was written up four times and given a warning that the F.B.I. calls a “suitability notice,” which put her in jeopardy of being kicked out of the program.

But, Ms. Coetzer said, a male instructor rescinded two such notices that male colleagues received. She said she performed well on future tests but was still bounced from training. –New York Times

Another woman, Erika Wesley, was a former FBI employee for six years in Baghdad before leaving the agency in 2010 to have her first child. She returned to the agency in 2018, where she attended training to become an analyst. She claims she was subjected to “inappropriate sexually charged commentary” by male instructors. Some of them, she claims, suggested that women should take birth control to control their moods.

Some trainees say they were “forced to take positions several grades lower than their previous grade or experience justified” after washing out of training.

This is just more to pile on to an unconstitutional, corrupt FBI.