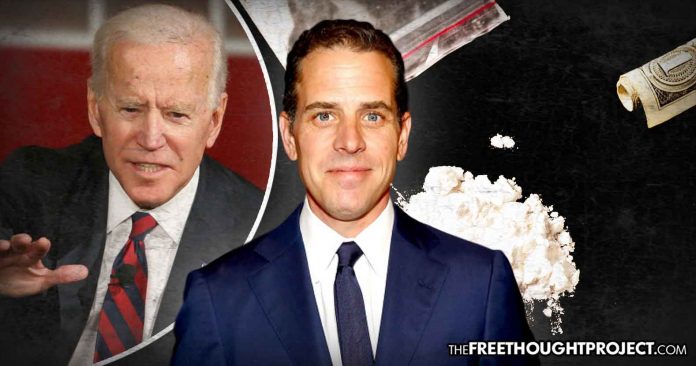 In the land of the free there is no question that there are two sets of laws on the books: one for those connected to the establishment and one for everyone else. This is evident through all levels of government from the lowly cops who rape children and face no consequences to the speakers of the house raping children and getting a slap on the wrist. As the following case illustrates, this connected privilege even extends to the relatives of those within the system.

It is no secret that Robert Hunter Biden, son of Democratic presidential candidate Joe Biden, has or had a pretty harsh addiction to cocaine. In 2014, he was kicked out of the Navy Reserve — where he was employed as a public affairs officer — after he tested positive for cocaine.

So, when Robert Biden was in Prescott, AZ on October 27, 2016, in a rental car by himself —where police found a pipe containing cocaine—it is safe to assume that this pipe belonged to the son of the former Vice President.

According to a police report from that day, which was released last month, a Hertz rental car employee named “Emily” reported that someone returned a silver Jeep Compass with a bunch of personal items still inside. Those items included a wallet with an attorney general’s badge, two driver’s licenses in the name of Robert Biden with his Washington, D.C., address, a Secret Service business card, and credit cards. Also, on the passenger’s seat in clear view, was a a “pipe that [Emily] thought was used to smoke meth,” and a small baggie with the white powder.

As the Phoenix New Times reports:

PRESCOTT POLICE OFFICERS SEARCHED THE CAR, TOOK PHOTOS, AND IMPOUNDED THE ITEMS. DETECTIVES CONTACTED THE FBI, AND TWO FBI AGENTS SOON SHOWED UP, THE REPORT STATES. BIDEN WAS “LOCATED BY SECRET SERVICE” AND DEEMED TO BE DOING “WELL.”

PRESCOTT AUTHORITIES SENT THE PIPE TO THE STATE DEPARTMENT OF PUBLIC SAFETY FOR TESTING; THE BAGGIE WITH POWDER APPARENTLY WASN’T TESTED. DPS LATER REPORTED THAT THE PIPE CONTAINED COCAINE RESIDUE BUT NO FINGERPRINTS. PRESCOTT POLICE FORWARDED THE CASE TO THE YAVAPAI COUNTY ATTORNEY’S OFFICE FOR PROSECUTION.

BUT ON NOVEMBER 16, 2016, THE PROSECUTOR’S OFFICE SENT A LETTER TO THE POLICE AGENCY NOTING THAT IT WAS TURNING DOWN THE CASE. IT INCLUDED A COUPLE OF REASONS FOR THE DECISION: “THAT CHARGE WOULD LIKELY BE DESIGNATED A MISDEMEANOR EVEN IF CONVICTED AT A JURY TRIAL. [BIDEN] HAS NO PRIOR FELONIES.”

While it is the opinion of the Free Thought Project that no one should go to jail for voluntarily ingesting random substances deemed illegal by the state, the case of Biden is particularly egregious given the town in which he was caught with the cocaine.

In Yavapai County, where Biden was caught with cocaine, County Attorney Sheila Polk has made it her personal tyrannical mission to deem anyone caught with drugs—even medical card carrying patients carrying entirely legal CBD oil—a criminal, and prosecute them to the fullest extent.

Medical marijuana has been legal in Arizona since voters approved Proposition 203, known as the Arizona Medical Marijuana Act, or AMMA, in 2010. However, Polk has been denying this law and arresting people anyway—charging them with felonies.

Adam Hight is one of these people. On Aug. 6, 2018, Hight drove to a legal dispensary in Glendale to purchase medical marijuana wax using his legal medical marijuana card issued by the state of Arizona. On the way back to Yavapai County, a Prescott Valley cop stopped Hight for speeding.

Clearly thinking he had nothing to hide, Hight admitted to having a thimble-sized amount of cannabis wax that he’d purchased legally one county over.

“I have nothing to hide,” he said as the cop peered inside his car.

However, in Yavapai county—the same county that let the son of Joe Biden go for smoking cocaine—possessing cannabis wax is a felony.

Hight was then thrown in jail for days where he was forced plead guilty to a misdemeanor charge of drug paraphernalia, and a felony possession of drugs charges.

Hight, who like Biden, has no criminal record, was sentenced to three years probation, ordered not to consume any alcohol or drugs, and cannot leave the state until this probation is complete. He also had to submit to a DNA test, the results of which will be uploaded to a national database for law enforcement identification purposes.

His car was also taken and impounded, he will end up paying up to $3,000 in fines, and will be forced to undergo counseling.

Showing the utterly ridiculous nature of Hight’s situation, when he was finally let out of jail, cops gave him back the marijuana he had on him that was in flower form.

This tyrant county attorney, Polk has prosecuted countless cases just like Hight’s and ruined countless lives of innocent card-holding medical marijuana patients. But, when the son of the Democratic presidential candidate gets caught smoking cocaine in her jurisdiction, all is well. He gets a pass.

It is no wonder 100% of the reviews for the Yavapai County Attorney Office all consist of one star reviews.